Morgan Stanley delivered some of the best quarterly results in the financial sector. Is it a good time to buy?

Third quarter bank earnings have looked pretty good so far, and Morgan Stanley (MS 2.19%) might have had the best quarter of all. Both earnings and revenue handily beat analysts' expectations, and all of the company's divisions posted very strong results. In fact, some of the other big financial institutions such as Bank of America, Citigroup, and Goldman Sachs beat expectations, but Morgan Stanley's stock price had the best immediate reaction to the numbers, by far.

So, what exactly was so good about the quarter, and is it a good time to buy?

Impressive numbers
Overall, Morgan Stanley produced earnings of $0.84 per share on $8.9 billion in revenue, easily surpassing Wall Street's expectations of $0.54 on revenue of $8.17 billion. This is a revenue increase of about 10% over the same quarter last year, and is about 3.5% higher than the second quarter.

And, the data within many of the individual business segments is even more impressive.

Thanks to lower litigation costs, the division was able to run much more efficiently, and total expenses actually remained steady year over year at $3.3 billion despite the massive increase in revenue. As a result, pretax income from the institutional securities division tripled from the third quarter last year.

Wealth management is more efficient, and growing in the right way
The Wealth Management division actually grew its revenue by more than 8% year-over-year despite having fewer employees. The company's average wealth management representative produced $932,000 in revenue and now manages $124 million in client assets, which are both records for the company.

Also, the fact that total client assets in fee based accounts grew by 18% should produce a higher revenue stream going forward. Plus, the increased assets aren't entirely due to the strong market returns over the past year; there were positive inflows of $6.5 billion into fee-based accounts during the quarter.

So, Morgan Stanley's clients deposited more money than they withdrew. This is the kind of growth that will help the company perform well, even if the market isn't doing great.

The only laggard is the smallest part of the company
In fact, the only one of Morgan Stanley's divisions whose revenue dropped year-over-year was the investment management business, which provides asset management products and services to institutional clients, and is the smallest of the three business segments.

Revenue dropped primarily due to lower investment gains and carried interest in merchant banking and real estate investing, and due to deconsolidation of certain legal entities associated with one of the firm's real estate funds. However, the gains in the Institutional Securities and Wealth Management divisions more than made up for it. 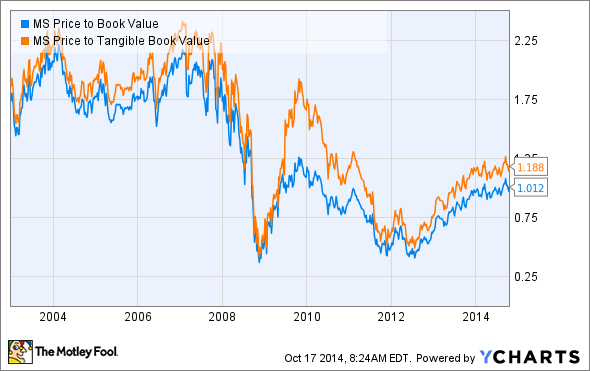 Investing in Morgan Stanley isn't without risk. For example, if the market continues to cool off we could see a decline in M&A and IPO activity, which would negatively impact the company's advisory and underwriting revenue.

However, even after the postearnings pop, shares are still trading at a historically low valuation. In other words, you can buy Morgan Stanley for less than the value of its assets, so it may be a risk worth taking.

Is Now a Good Time to Buy Your First Investment Property?
349%