It's turning out to be a disappointing second half for Caterpillar (NYSE:CAT) investors. After a strong start to the year, the stock has given up 12% over just the past month, leaving some investors jittery.

But those who have followed Caterpillar for years will also know that despite major headwinds in recent times, the stock has handily beaten the Dow Jones Industrials over the past decade. 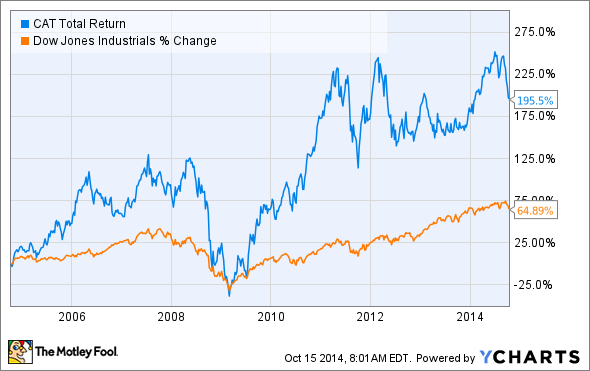 Given Caterpillar's solid performance over the years, doesn't the recent dip in the stock price then look like a good opportunity? Before jumping to a conclusion, you need to find out whether the stock's a better bargain than peers right now; and if yes, why.

Notwithstanding the challenging times that Caterpillar has had to face over the past couple of years, it considers itself a compelling story for long-term investors. To convince them about its growth potential, Caterpillar stressed on the following strengths in one of its recent presentations. 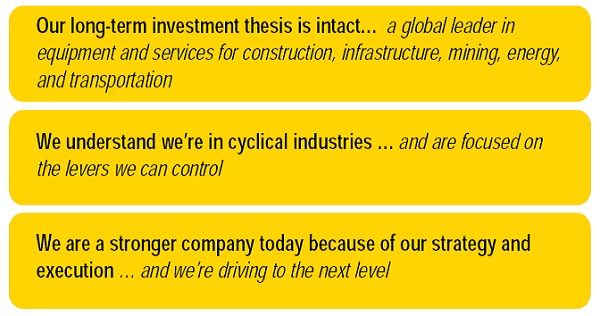 Global leadership is perhaps the biggest reason why investors should pay attention to Caterpillar. The company runs three primary businesses – Resource Industries (mining equipment), Construction Industries, and Energy & Transportation. Today, Caterpillar is not only the world's largest construction and mining-equipment maker, but is also the leading producer of engines (diesel and natural gas), gas turbines, and diesel-electric rail locomotives.

Considering the diverse nature of Caterpillar's business, volatility in sales and earnings is inevitable. Caterpillar gave an excellent insight into how cyclicality has affected its sales over the years in the following graph. 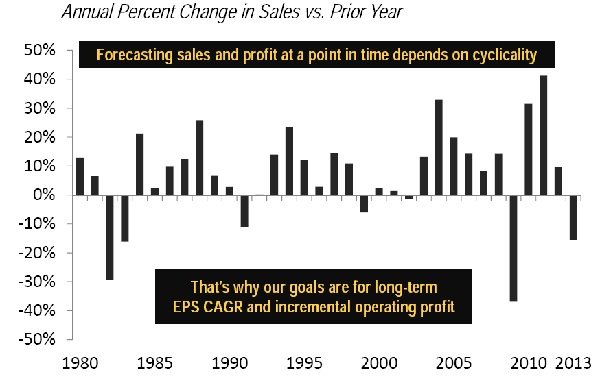 Knowing how unpredictable things can get, Caterpillar is now strengthening several areas of its business to equip itself better to handle future cyclical downswings. One of them is an initiative to revamp its massive dealership network.

Caterpillar has chalked out a series of steps to improve its dealers' performances. The potential looks huge – Caterpillar expects to add an extra $9 billion to its top line if dealers hit median quartile performance and nearly $18 billion if they hit top quartile, all within the next four years. That additional revenue should provide excellent support to the company if economic conditions were to weaken in coming years. Moreover, considering that its dealership network is one of Caterpillar's strongest competitive advantages, any efforts to strengthen it further is a step in the right direction.

In its drive to grow, Caterpillar isn't forgetting its shareholders. It aspires to be in the top quartile of S&P 500 in terms of total shareholder returns. And the company has identified achieving 15% compounded average growth in its profits as a key step toward that goal. In other words, Caterpillar is striving to boost its bottom line, and wants to return a lot more to its investors in the years to come.

But while all of that sounds good enough to have Caterpillar on your radar, the question is whether this is the right time to buy the stock. Let's dig deeper into its valuation to get the answer.

Caterpillar primarily competes with Joy Global (NYSE:JOY) in its mining-equipment business, John Deere (NYSE:DE) in construction equipment, and Cummins (NYSE:CMI) in its engines business. Let's take a look at how Caterpillar's stock stacks up next to these peers:

Caterpillar looks like a fairly good bargain going by the earnings multiples. While it shares have a similar valuation with Cummins, it certainly is a better buy compared to Joy Global, given Caterpillar's diversity vis-à-vis Joy's huge exposure to the struggling mining industry.

Deere may look like a grab at such a low trailing earnings multiple, but its double-digit forward P/E suggests that the Street expects its earnings to weaken in the near future. That isn't surprising, given the looming fears that the farm-equipment (which is Deere's primary business) industry could be entering a downcycle. In contrast, analysts are hopeful about Caterpillar's future earnings, as evidenced by its lower forward earnings multiple. Much of the optimism is backed by the ongoing strength in the U.S. construction industry and the resilience shown by the company's high-margin energy and transportation business.

But you can't rely on one metric when it's a question of investing your hard-earned money. So let's test Caterpillar based on price-to-book value, an extremely useful measure for capital-intensive companies that carry heavy assets on their books.

At first blush, Caterpillar looks like one of the expensive stocks out there, trading at nearly thrice its book value. But the stock may not necessarily be overvalued.

With the mining slowdown taking a toll on Caterpillar's earnings over the past couple of years, the company's return on equity, or simply the return that it generates to shareholders, dropped substantially – Its current ROE stands at 20%, compared to near 41% in 2011. At the same time, Caterpillar's P/B (where "B" is nearly the same as "E" in ROE) also fell sharply from nearly 4.6 in 2011 to 2.8 in 2013. In other words, the market timely factored in the slowdown in the company's earnings and accordingly bid its stock price (which is simply the "P" in P/B) lower. That, coupled with the fact that Caterpillar is also trading much below its five-year average P/B of 4.1, suggests that the stock is anything but overvalued today.

So should you add Caterpillar to your radar?

Yes, by all means, if you believe in the buy-and-hold strategy. Caterpillar is strong from several aspects, which makes it a great company to invest in. But as a cyclical company, its earnings, and hence its share price, are bound to be volatile. If you can stomach that volatility, Caterpillar is worth a look.