The biggest names in solar are talking a lot about efficiency, but one company is way out ahead.

The driver of value in the solar industry is changing, and you may not have even noticed. A subtle shift over the last year or two has turned into a flood of activity improving one aspect of each solar system.

Why efficiency is suddenly a hot topic
As the solar industry has grown and evolved in the U.S., most solar installers were concerned about squeezing every possible penny out of a system's installation. They wanted cheaper solar panels, fewer workers in a crew, faster racking installation, and any other improvement they could make. The technology behind the panels they installed didn't seem to matter, and when I asked industry executives about the efficiency of the panels they were installing they said commodity panels were good enough.

I remember asking that specific question to SolarCity (SCTY.DL) and Sunrun executives last year. How were they looking at solar panel efficiency that might squeeze more power out of each rooftop? Was there a competitive advantage in high efficiency? The simple answer was that they had bigger concerns in cutting cost elsewhere in the value chain, and efficiency was an afterthought.

But that narrative has changed almost overnight. Costs have fallen low enough that companies are trying to squeeze more power from each installation. It's now economical to install a more efficient -- and more expensive -- solar panel on a roof than to just buy a commodity panel. Efficiency is hot in solar.

Traditional solar cells are shaded by bus bars on the surface. Image is in the public domain.

The efficiency push is on
Showing just how important efficiency has become, three of the U.S.' largest solar system installers are touting their own efficiency gains, or at least their plans to improve efficiency.

SunEdison (SUNEQ) recently announced that its new zero white space technology will increase the power output of each solar panel by 15%, lowering system costs by 8% per watt. Higher efficiency leads to lower cost energy, which is why this is now a focus in solar. What SunEdison is doing is simple enough: increase the amount of productive energy-producing space on each solar panel by reducing shading from bus bars and using the space between cells to conduct electricity, leading to higher efficiency.

SolarCity might have made the biggest splash this year when it bought Silevo earlier this year, a company that uses Triex technology to make more efficient panels than commodity competitors. The company can currently make a 21% efficient cell (or about an 18% efficient module) and has targeted 24% cell efficiency in the future. One of the justifications for the acquisition was a projected 24% reduction in the number of panels needed per installation. 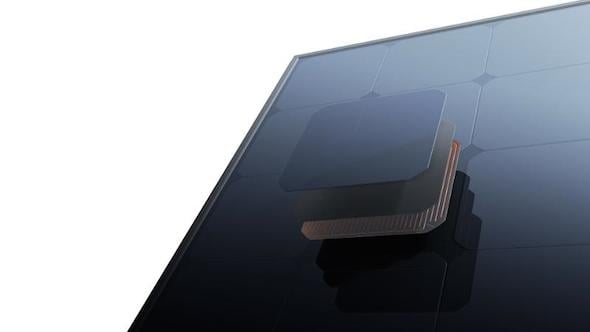 SunPower's Maxeon technology results in the highest efficiency panels in the world. Image courtesy of SunPower.

Playing catch up to the world leader
All of this focus on efficiency is great for SunEdison and SolarCity, but as far as SunPower (SPWR -3.58%) is concerned they're late to the game. SunPower has long made the world's most efficient solar panels using back contact technology that eliminates bus bar shading and using fundamentally more efficient cell construction. It has a 21.5% efficient module on the market and promises to improve efficiency further when next-generation manufacturing capacity comes online next year.

SunPower's efficiency compares to 18.2% efficiency for SunEdison's most efficient module and a target of about 18% for SolarCity's modules when production begins in two years.

One reason I've been high on SunPower is that it has demonstrated a long lasting technology lead in panel efficiency. The fact that two of its largest competitors are making efforts to improve their own efficiency shows that efficiency is important in the solar industry, and that it provides a competitive edge for those who can produce it.

Solar panels are the core technology component to solar power, and they're more important now than ever. Long term, I think the companies that can improve technology fastest will build a durable competitive advantage; with a head start on the efficiency front, I think SunPower is still the best bet in solar.