Saudi Arabia, the former world leader in oil production, has some major problems. Oil revenue, which totaled $274 billion in 2013, accounts for 80% of its government revenue, and 38.1% of its GDP. To say that the county is dependent on petroleum is an understatement. However, Saudi Arabia's problems extend beyond the fact that the life blood of its economy will one day run out.

The kingdom is also facing a population boom, with 47% of its citizens 24 years old or younger.

Why does that matter? Two reasons: First Saudi Arabia's economy has been booming right along with its population in recent years. For example, between 2011 and 2013 economic growth ranged from between 3.6% and 8.6%. and 4.7% in the first quarter of 2014.

The combination of a fast growing population and strong economic growth has resulted in steady growth in demand for both oil and electricity. 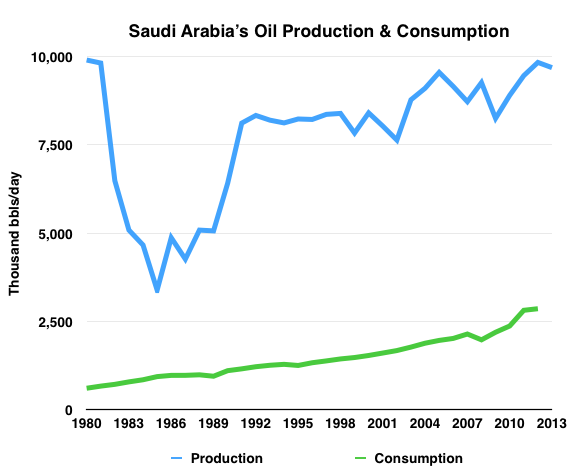 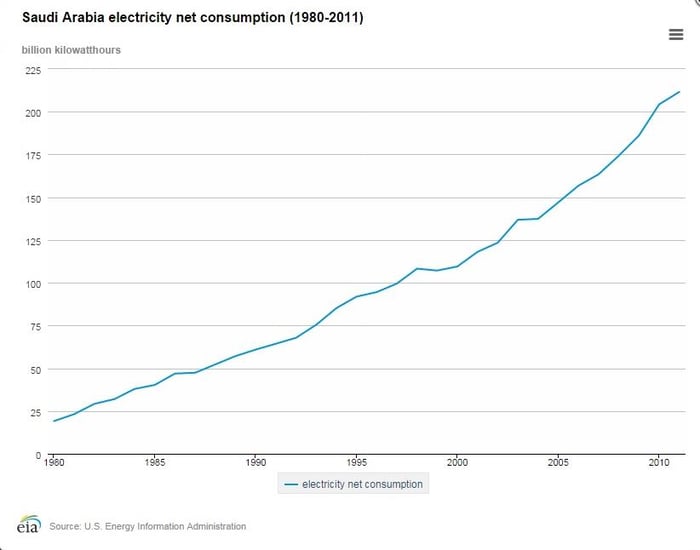 According to the Energy Information Administration, Saudi Arabia is the world's largest consumer of oil-based power generation in the world. This is especially true during the summer, when peak demand due to air conditioner use resulted in the kingdom burning an average of 700,000 barrels/day of oil to generate electricity during the summers of 2009-2013.

That means that Saudi Arabia is burning as mach as 8.5% of its daily oil production just to keep the lights on and AC blowing. In fact, air conditioning consumes up to 50% of the nation's power during the summer. Given the country's growing domestic oil demand, the simple fact is that Saudi Arabia simply can't afford to keep wasting its main economic product, which is a finite resource, to generate power.

What's Saudi Arabia's solution? To turn to its thus far untapped deserts to harness the power of the sun.

Saudi Arabia's $109 billion solar bet
Saudi Arabia recently announced plans to invest $109 billion to build 41 GW of solar generating capacity by 2032, which is expected to provide 30% of the country's power at that time.

According to Khalid Al Sulaiman, vice president for renewable energy at the King Abdullah City for Atomic and Renewable Energy, this ambitious program, part of the nation's goal of 52 GW of renewable power by 2032, is designed to allow Saudi Arabia to export up to 10 GW of power to Europe during the winter when power demand is at its weakest.

If the kingdom can execute on this plan it would make Saudi Arabia one of the world's leaders in renewable energy, certainly an ironic fact given that the nation is currently leading the charge to increase OPEC's oil output in a bid to take market share away from U.S. shale production.

Saudi Arabia's competitive solar advantage
One of the main reasons Saudi Arabia is planning such a big push into solar is because they can do it cheaply. For example, using the levelized cost of energy metric (which is used to compare the construction, maintenance and power generation costs of various power generation methods) Saudi Arabia is already able to build utility scale solar projects for just $70/MWh to $100 MWh compared to US costs of $130/MWh-$243/MWh.

According to Thierry Lepercq, founder and Chairman of Solairedirect, a French solar installer, by 2020 he anticipates that costs will decline by 29% to 50% more, down to just $50/MWH to $70/MWH. Given that the cost of solar installations in the kingdom have declined by 75% since 2009, this additional cost decline is great news for fans of renewable energy. That's because it would make solar power the cheapest form of energy in the country and offers to help the nation with one of its most intractable problems.

Solar power: answer to Saudi Arabia's water woes
Saudi Arabia has almost no rainfall, no rivers or lakes, and very limited ground water reservoirs. Yet according to Abdullah Al-Hussayen, its Minister for Water and Electricity, it consumes double the amount of water per capita as the rest of the world, 70 gallons/day.

With a growing population, lack of water is a major national concern, but solar power, with its promise of cheap, plentiful electricity, might be the answer to the nation's water dilemma by powering desalination plants.

Already the kingdom is investing heavily into making drinking water from the sea, pledging $7.2 billion to the recently announced Ras al-Khair desalination facility, which will have a capacity of generating 264 million gallons of potable water per day. This plant, which will be the largest desalination plant in the world upon completion, is to join another plant, with a stated capacity of 158 million gallons/day, which is scheduled to go online in 2017.

How you can cash in
So Saudi Arabia is going solar crazy, but is there any way for you to profit? The answer is yes, thanks to my two favorite solar stocks, whose superior technology, balance sheets, operational efficiencies, and profitability make them stand out among their solar peers. Its why I believe these two companies to be the two best solar stocks you can buy today.

I'm referring to First Solar (NASDAQ:FSLR), and SunPower (NASDAQ:SPWR), two of the largest solar panel manufacturers and solar project builders in the world. When Warren Buffett wanted to invest $6 billion into massive solar projects (as part of a potentially $30 billion investment into renewable power) he chose projects designed and built by First Solar and SunPower because of their superior technology, which results in lower long-term costs and thus improved profitability.

For similar reasons utilities in over 30 countries on over six continents trust SunPower to build their projects. In fact, the company is currently working on completing or securing over 350 projects with a total combined capacity of over 8 GW.

While Saudi Arabia's current solar capacity is small, it represents an amazing growth opportunity for SunPower, who was chosen to build the largest solar project in the country, at the prestigious King Abdullah University of Science and Technology (KAUST).

SunPower also has an edge when it comes to relationships with oil-rich nations, being 66% owned by French oil giant Total SA, which can use its connections with customers and suppliers throughout the Middle East to help SunPower secure contracts. These don't just include massive utility scale projects designed to power cities, but also provide smaller, on site power for oil projects throughout the region that currently run on diesel generators. Total's ownership also gives SunPower access to cheaper capital, which saves an average of $1 million to $10 million per solar project. These are cost savings that the company can pass onto customers and that give them an advantage when it comes to bidding for solar project contracts.

Meanwhile First Solar, which also has a presence globally, already has a branch open in Saudi Arabia, ready to cash in on this $109 billion opportunity. The branch is led by Raed Bkayrat, formerly of KAUST, who now serves as the company's Vice President of business development for Saudi Arabia.

In 2013 the company began work on its first Saudi Solar farm and expects to secure many more such projects thanks in part to the 15 years of connections Mr. Bkayrat has formed while acting as a leading proponent of KAUST's clean energy programs.

Bottom line
Saudi Arabia may be famous for oil, but the fast growing nation is faced with many problems, including a booming demand for oil, electricity, and drinkable water. To secure its future economic prosperity the nation is investing massively into solar power, where its sunny deserts and low costs make it an ideal solution to many of its problems. First Solar and SunPower, in addition to being two of the most profitable and best run solar companies in America, are poised to profit from this $109 billion investment. Long-term investors wanting to cash in on the global promise of solar should definitely have these two companies on their radar and potentially in their growth portfolios.