With excess supply in the oil markets, President Obama should top off the Strategic Petroleum Reserve.

After several Arab countries implemented a destructive oil embargo against the United States in 1973, the U.S. created the Strategic Petroleum Reserve. Like many other oil-importing states, the U.S. now keeps a large supply of oil in reserve to hedge against threats to the national oil supply.

President Obama ought to completely fill the SPR. Photo source: The White House.

The Strategic Petroleum Reserve has not been completely full since early 2011. With oil prices having recently fallen to a multiyear low and oil demand seeming sluggish, President Barack Obama should take this opportunity to refill the SPR to its full capacity.

Oil in the tank

The U.S. Strategic Petroleum Reserve has a total capacity of roughly 727 million barrels of crude oil. Net U.S. crude oil imports have averaged just more than 7.2 million barrels per day (bpd) this year. At that rate, the SPR (if full) could replace 100 days of imports in the event of a supply disruption.

In reality, the oil in the SPR would last longer in a crisis. Oil can only be withdrawn from the SPR at a 4.4 bpd rate due to technical constraints. This would probably be more than adequate, as an oil crisis would drive up prices (leading to lower consumption), while a complete import cutoff would be extremely unlikely.

As of mid-2001, the Strategic Petroleum Reserve contained roughly 545 million barrels of oil. Following the Sept. 11 attacks, former President George W. Bush ordered the Department of Energy to gradually fill the SPR up to its full capacity. The process was interrupted a few times, but the SPR reached capacity by late 2009. 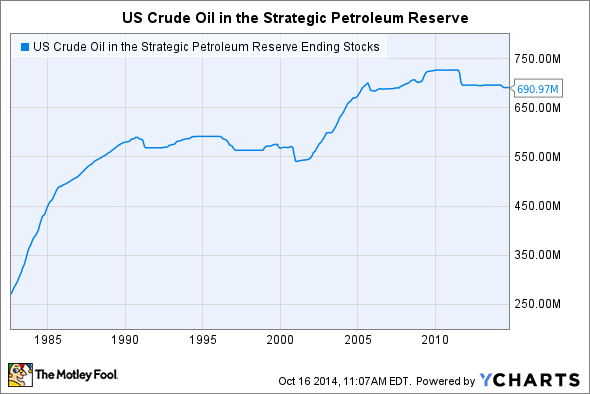 US Crude Oil in the Strategic Petroleum Reserve, data by YCharts

This extra supply may have contributed to oil prices stabilizing in the second half of 2011. That said, the cause-and-effect relationship is not clear. Oil prices had already pulled back somewhat from the peak by the time Obama announced plans to tap the SPR. 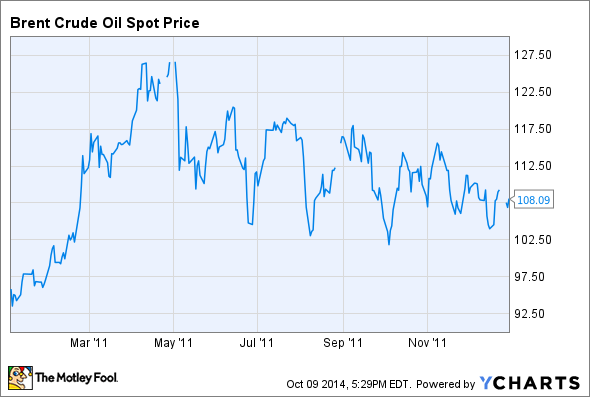 Helpful in a pinch

Whether or not the SPR helped cool off the oil market rally in 2011, it is better to have more oil available in the reserve than less. Indeed, less than a year after he tapped the SPR in response to the Arab Spring, Obama considered opening up the taps as oil prices spiked during early 2012.

At the time, critics blasted Obama for using the SPR as a political tool to keep gas prices down. Indeed, the primary purpose of the SPR is to hedge against the risk of a major supply disruption. That said, it is also useful to have the SPR as a backup during temporary periods of tight supply, in order to dispel fears of a shortage that could cause a rapid oil price spike.

However, if the SPR is to serve as a supply of last resort during lean times, it needs to be refilled when there is more slack in the market. The 30 million barrels withdrawn in 2011 and some smaller subsequent withdrawals have not been replenished. Today, there are 691 million barrels of oil in the SPR: about 36 million barrels less than its total capacity.

The time is right

Now would be a great time for Obama to refill the SPR. The price of Brent crude oil has fallen from $115 earlier this year to $86.36 as of Tuesday and less than $85 by Thursday. This puts it at its lowest level since 2010. 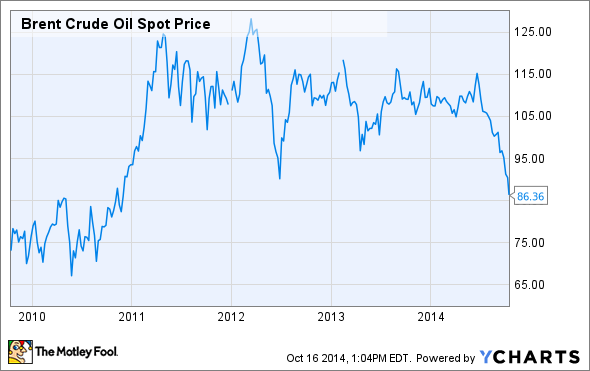 Moreover, rising U.S. oil production and sluggish oil demand have freed up some excess production capacity. On the flip side, there is a considerable amount of geopolitical instability in key oil-producing countries, most notably Iraq (due to the Islamic State) and Nigeria (due to Boko Haram).

So far, these regional conflicts haven't had much of an impact on oil exports. However, there's a significant risk that one or both will at some point threaten oil production, which could cause oil prices to spike quickly higher. It would be wise to maintain a full Strategic Petroleum Reserve to mitigate a potential supply disruption down the road.

Some people who are delighted to see gas prices on the way down to $3 per gallon might prefer to avoid filling the SPR, fearing that this extra demand would ultimately lead to higher prices. Yet significantly lower oil prices are not sustainable.

U.S. oil production growth has been driven by the shale oil boom. Yet shale oil projects will start to become unprofitable if oil prices keep falling. The $80 level is frequently cited by experts as a break-even figure for many producers.

In other words, the U.S. shouldn't worry about impacting oil prices by refilling the SPR. If oil prices fall much further, it could start to impact U.S. production, which would ultimately cause prices to rise again -- perhaps further than they otherwise would.

Today, the U.S. (and global) oil supply faces significant threats that make it worthwhile to have as large a strategic oil reserve as possible. At the same time, oil prices have fallen to multiyear lows as supply growth has temporarily run ahead of demand.

Obama should take this opportunity to refill the Strategic Petroleum Reserve to its full capacity. The benefits to the United States' energy security far outweigh the potential costs.