The company may have to change strategies to save its over-the-top streaming service.

The WWE (WWE -1.42%) Network has been a failure so far. The company has not reached its subscriber goals and despite a heavy marketing push during its television programs, appears unlikely to do so anytime soon.

This has caused the company to retool its plans, make massive budget cuts, and rethink its model. One of these changes is adding advertising to the $9.99 a month service. That's a big change because most subscription-based networks -- think HBO or Netflix (NFLX 3.14%) -- operate without ads. It's a major shift, but it may be part of a bigger strategy to move the network away from a purely digital over-the-top model and put it on an actual cable channel.

In the short-term, the company emailed subscribers to let them know about the ads and to downplay their significance. 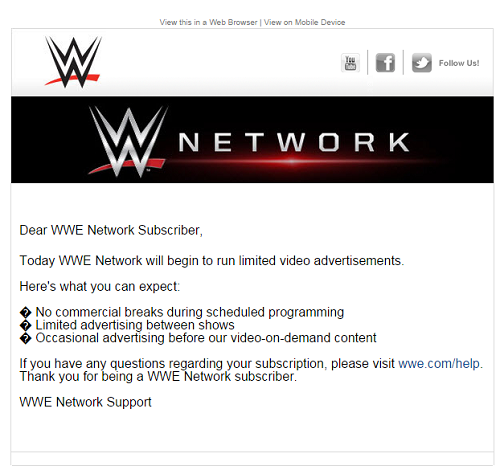 The network has both a live feed and a large amount of on-demand programming. If you watch the feed, you'll see ads between shows and if you watch something from the archives a commercial will air before your show starts. It's similar to how YouTube operates, but YouTube does not cost $9.99 a month.

How badly is the network doing?
When WWE launched its network, it decided to offer its monthly pay-per-view events on the service. This, in theory, made the network a phenomenal deal for even casual fans. Since each PPV costs between $44.95-$59.95 (or more if you order in HD) then anyone who orders three in a year would be better off subscribing to the network.

To get the network for $9.99 per month, you must commit to if for six months. This was done to stop people from signing up to see a big PPV and then dropping their subscription. That makes the network a good deal -- for at least half the year -- for casual fans who would have spent $59.99 to order Wrestlemania, the biggest show of the year, through a traditional cable provider. The value proposition is clear to devout fans is clear.

On paper it makes sense, but in reality, WWE fans have balked. The last time the company reported a subscriber count at the end of July, it had just barely topped 700,000 -- only a slight gain on the 667,287 it reported in April -- the first time it gave a specific subscriber total since launch. Bear in mind, that only three months has passed between these reporting periods, so that number could be buoyed by users stuck in the six month commitment that don't intend on renewing their subscription.

While it's still early in the game, WWE has done a terrible job marketing the network, which has kept even some of its diehard fans away. Though the company has aggressively pushed the $9.99 a month price, it has not done a very clear job showing people that the network is not just for computers, tablets, and phones, it's also relatively easy to watch it on your TV through various set-top boxes, consoles, and other smart devices.

Why is WWE doing this?
Adding advertising may not be just a short-term effort to squeeze out a little more revenue, it may be a sign of a changing strategy. In Canada, WWE Network is not an over-the-top digital product. Instead, it's a subscription-based service offered through Rogers Communications that works in the fashion of a premium cable channel like HBO or Showtime. There are some on-demand archives (though not anywhere near as deep as the ones offered in the U.S. purely digital version), but the key draw is the actual channel.

And while WWE has not announced any numbers, Dave Meltzer of the highly respected industry newsletter The Wrestling Observer said on a recent radio show that the experiment is going well.
"People are going to hate to hear this, but the really stripped down television version in Canada is a huge success," Meltzer said. "It's more expensive and you get far less, but it's on television not on the Internet."
Being on actual TV leaves room for ads. Though HBO, Showtime, and other pay TV stations don't sell commercials, they do run extensive ad-like in-house promotions which are essentially the same. It's reasonable to think that given the initial positive returns in Canada, WWE is considering finding cable television partners and shifting the model for the network. If that happens, advertising could play a bigger role.
Will WWE network succeed?
It seems like technology is holding WWE Network back because its fans, partially due to the promotion of the product, don't know that it's easy to get it on their television. The short-term fix for this is to make more deals like the one in Canada.
The benefits of this model are significant, though there are some downsides. On the positive side, every cable customer understands how subscribing to a premium network works. There's no technology required and the charge becomes part of a larger cable bill making it, in a way, disappear. It's also a lot cheaper for WWE. If fans are willing to subscribe for the PPVs and a smattering of archival programming, that saves the company a ton of money as it won't have to produce as many network originals or repurpose as much archival content .
On the negative side, WWE will have to share revenue with the cable companies and might have to charge more.
Still, that should not matter if customers subscribe in much larger numbers because it's easier and more familiar for them to do so through cable. In that model, ad revenue becomes the icing on the cake, but it's a much bigger cake.

Daniel Kline has no position in any stocks mentioned. He is a WWE Network subscriber. The Motley Fool recommends Netflix. The Motley Fool owns shares of Netflix. We Fools may not all hold the same opinions, but we all believe that considering a diverse range of insights makes us better investors. The Motley Fool has a disclosure policy.

This Streaming Stock Could Make a Mighty Move In Sports Entertainment