The stock is nearly 60% off its all-time high, even with television deals in place for at least the next three years.

One thing I've learned from being a World Wrestling Entertainment (WWE -1.52%) fan for decades is this: It's like a secret society. When you admit you watch what amounts to a sports soap opera, you either find another fan or get an eye roll. Whatever non-viewers think of WWE, the company has staying power with roots that can be traced back to the 1950s.

However, its streaming service, the WWE Network, hasn't lived up to expectations. Whether the company should keep the service in house or take a new approach is the current debate. WWE even has a slogan that can serve as a blueprint for investors -- "WWE Then, Now, Forever." Understanding the company's history, current setup, and future opportunities is key to taking home the gold. 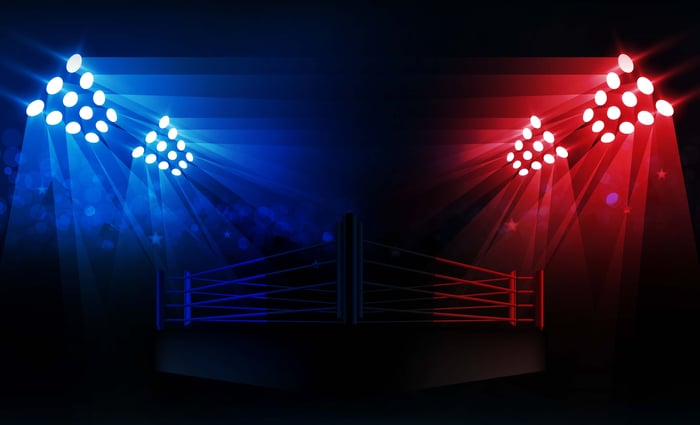 Looking to the company's roots, to say WWE holds the reins to two of the most iconic shows in the history of television is an understatement. Raw has aired over 1,300 consecutive episodes, making it the longest-running cable episodic show in history. Even the iconic runs of shows like M.A.S.H., Friends, and Seinfeld pale in comparison.

With over 1,000 consecutive episodes, the second longest-running show in cable history is Smackdown. These shows are the linchpin of the WWE business, advancing the storylines that are normally resolved by pay-per-view content.

According to an ESPN study, the disappearance of sports due to the coronavirus pandemic could lead to billions in lost revenue. Some may assume that WWE live events are the company's primary means of making money. However, the company's media division, which is comprised of its television deals and streaming service, represented almost 90% of the top line last quarter.

Fans know they can watch WWE content on traditional television, but the WWE Network offers live streaming of both weekly epsiodes as well as pay-per-view events. This service has been around for years, though Netflix and its competitors get most of the attention when it comes to streaming brands. If WWE wants its Network to have a profitable future, it's time for a hard choice.

The WWE Network was supposed to be the future of the company. When the service debuted in Feb. 2014, over 660,000 subscribers signed up in just a few months. However, the service reached its peak of over two million subscribers in 2018 and has since dwindled to just under 1.5 million.

The next step for WWE is to choose whether to follow the Walt Disney model of removing its content from third-party providers and making its own service the exclusive source or embracing more licensing deals. The current mixed model isn't inspiring confidence with investors.

If the WWE Network were to go the first route, it would mean drastic changes. The company would need to pull its Raw and Smackdown replays from Hulu. With more than 32 million Hulu subscribers, this could be a major setback for overall viewership. Second, too much free YouTube content is possibly hampering growth for the WWE Network as well. Given this backdrop, it's probably time to set the network free.

What would that look like? The company has floated the idea of three different membership tiers for WWE Network: a free tier, the current paid tier, and a premium tier. The company has this one-third right: WWE needs to move its network to a free tier supported by advertising. However, the pay-per-view specials need to take a different path. CEO Vince McMahon seems to have the right idea of licensing its pay-per-view events to a major media company. Looking at other licensing deals could give investors a hint of what's available to WWE.

For example, when the UFC decided to license its pay-per-view events to ESPN+, the company received $300 million a year over five years. Given the existing relationship with Hulu, WWE could try to expand its existing deal with the Disney-owned service.

And the company has 18 pay-per-view shows planned for 2020, shows that normally contain matches not otherwise available and are some of the most watched events of the year. For example, in both 2018 and 2019, WrestleMania set attendance records and drove subscriber growth for the WWE Network. It's safe to assume that each pay-per-view event is worth far more than the average Raw or Smackdown episode. So in order for a broad pay-per-view licensing deal to offset the loss of WWE Network revenue, the company would need a deal worth about $180 million per year in total. Considering the deal values for Raw and UFC, that target seems well within reach.

The bottom line is WWE could expand its reach and improve its top-line growth through a deal, whether it's with Hulu or a competing platform. When WWE signed its last television deals in 2018, the stock rocketed to an all-time high of more than $90 per share. With renegotiation of those deals still roughly three years away, the stock trades at less than half that level. Investors are putting little value in the potential of the WWE Network. CEO Vince McMahon is known for constantly moving WWE forward -- a big pay-per-view deal could be the necessary move to push the stock to new highs.

This Streaming Stock Could Make a Mighty Move In Sports Entertainment