Every so often, Intel (NASDAQ:INTC) will publish an update to what the chipmaker calls its "public road map." In a nutshell, this is a rough overview of what products Intel has on the market across its various segments and, in some cases, an estimate of when new products will come to market.

These road maps don't offer too many product or precise launch schedule details, but they do help investors get a sense of roughly when to expect certain products.

Following its third-quarter earnings report, Intel updated its public product road map. In doing so, it gave investors valuable information about the timing of its upcoming server-oriented product launches.

Say hello to the road map 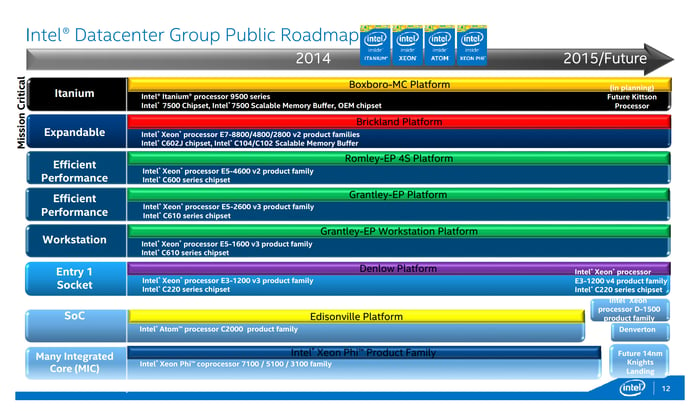 Everything from Itanium down to "Entry 1 Socket" is well known and not worth discussing. However, what is worth looking at is what Intel is doing with its "SoC" and "Many Integrated Core" products.

The company launched its Atom C2000 product family (formerly known as Avoton) in 2013 in a bid to counter the first 64-bit ARM-based chips from a variety of vendors. It's not clear how robust the market for these parts is, but Intel was successful in bringing to market low-power, low-cost system-on-chip products based on its Atom processor before competitors were able to roll out their own 64-bit ARM designs. The successor to Avoton is Denverton, which is shown on the above road map.

While this road map does not offer any further technical details about either chip, it does confirm something of a slip. Both the Xeon D and Denverton products are now squarely listed under "2015/Future." Previously, Intel had signaled that Denverton and Xeon D would be "2014 and beyond" products. 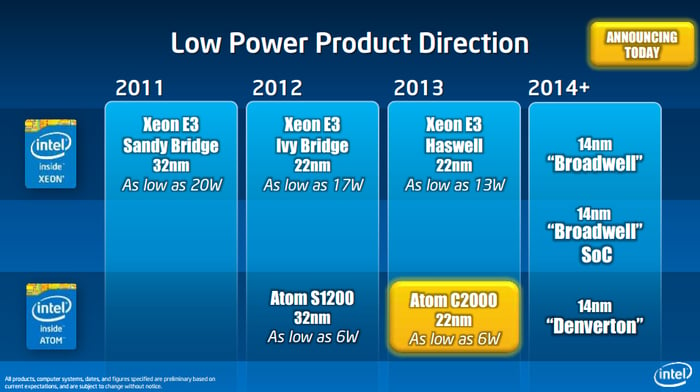 What does this mean from a competitive perspective?
Delays are never fun, but to do a proper analysis, the product launch timelines need to be put in context of products from Intel's competitors.

From what I can tell, Xeon D and Denverton are meant to compete with the following competing product lines:

From the looks of it, Project Thunder, X-Gene 2, and Seattle will hit the market at some point in 2015. All three of these products, according to published materials, will be built on 28-nanometer manufacturing technology.

Denverton and Xeon D are set to be built on Intel's 14-nanometer process, which means the company can not only pack in more functionality into the same chip area, but it should have transistors that are substantially higher performing at a given power level.

Looking past the underlying chip manufacturing technology, the architecture of these chips is extremely important, too. However, Intel has shown for years that it can deliver best-in-class server chip designs.

All told, I think that despite the delay of Intel's 14-nanometer server-oriented system-on-chip products, the company should still be in a very comfortable position relative to its competitors.

Foolish takeaway
Although the delay in Intel's 14-nanometer server-oriented system-on-chip products is disappointing, I don't think it materially changes the company's competitive positioning in the low-power server market during 2015.

Additionally, now that Intel has about a year's worth of sales numbers for its Atom-based server chips, it will be very interesting to hear what Diane Bryant, who runs Intel's data center group, has to say about the uptake of these chips relative to the company's more traditional Xeon product offerings.