Disappointing same-store sales are becoming a regular story in the home market, but McDonald’s is bent on making the metric take a U-turn.

The world's biggest hamburger chain, McDonald's (MCD -0.23%), is facing tough times on the home turf, from where it draws nearly a third of its revenue. Shifting consumer trends and increasing competition has resulted in disappointing U.S. same-store sales, which headed south for the fourth consecutive month in August. The August decline of 2.8% is the nastiest drop registered by the company in more than a decade. In its Q3 report Tuesday, McDonald's reported that U.S. comparable-sales in the quarter decreased 3.3%, "driven by negative guest traffic amid sustained competitive activity."

However, the Big Mac maker is fine-tuning its U.S. strategies to revive sales and align things on the growth track. Here's a lowdown on McDonald's current woes and its latest game plan.

Challenges building at home
McDonald's has a total of 35,683 franchised and company-owned restaurants, of which some 40%, about 14,200 outlets, are in the U.S. It dominates the $191 billion American fast-food industry with a market share of 21.7%. Such supremacy is particularly striking considering that there are roughly 149,000 fast-food enterprises in the country. 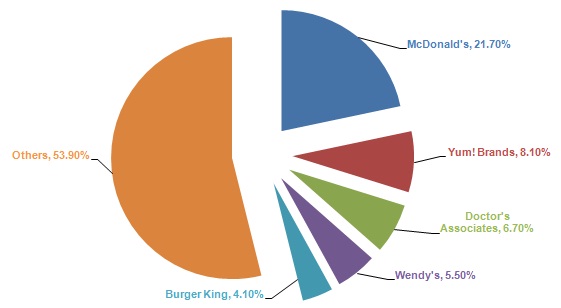 Greater health awareness among Americans has made consumers avoid quick service restaurants (QSRs). Millennial customers, in particular, have been opting for healthier alternatives from fast-casual outlets like Chipotle (CMG 0.35%) and Panera Bread. Though the duo may be tiny in terms of revenue, they are hitting exactly where it hurts. The burrito and taco maker, Chipotle, is highly regarded for its "Food with Integrity" that entails using naturally raised ingredients and grain-fed cattle as opposed to factory-farmed meat used by most QSR chains. Panera is the other big name in this category that uses a lot of organic ingredients -- suiting the shifting health food preferences perfectly.

To add to the pressure, Starbucks' (SBUX -1.42%) is planning to expand beyond its conventional coffee-centric menu to become a regular breakfast and lunch destination. In 2012, Starbucks bought La Boulange, a small bakery and cafe shop based out of San Francisco, and the coffee chain has started offering baked menu items in several stores. This together with Teavana tea offerings drove a 6% same-store sales growth in the Americas segment in the latest quarter for Starubcks. Starbucks COO Troy Alstead said, "By the end of fiscal 2015, we expect the lunch program to look very different than it does today."

To compete with morning-crowd pullers like Starbucks and Dunkin' Brands, it introduced a test breakfast menu offering Petite Breakfast Pastries in the San Diego area early this year to get the pulse of the crowd better. The Los Angeles Times reported that early Twitter reviews of the coffee shop concept were pretty strong, signaling that McDonald's focus on the breakfast market is bearing fruit.

To pep up its lackluster comparable sales growth, McDonald's is trying its hands at build-your-own burgers with topping options like bacon, guacamole, tortilla chips, and more to attract a younger crowd looking for healthier options. In a few restaurants the company's taken a step further by experimenting with the "Create Your Taste" program, giving options to choose the bun and toppings. Thompson plans to expand this to more outlets next year. Additionally, having realized that its wide menu is confusing customers, making it unmanageable for the staff, and increasing service time, McDonald's will do away with not-so-popular items. This should simplify its menu.

Changing with changing times
The company realizes that changing consumer behavior and stalling growth is a wake-up call for the industry to reform its menu. Fatty burgers and fries cannot be its growth catalyst and it's necessary for the Oak Brook, Ill.-based company to add more nutritive value to its food. So, it's expanded its menu to offer egg white sandwiches for breakfast, salads, and wraps to health-conscious guests.

Apart from this, McDonald's is conducting a global audit of its marketing department to improve public perception of its food. The CEO says the company's crafting creative messages to portray its emphasis on quality food, and rebuild the emotional connect with customers, with the promise to deliver them "the McDonald's experience." Further, as part of its promotional strategy, McDonald's is trying to engage with millennials through the social media campaign called "Our Food. Your Questions." Individuals can present any question or concern through Twitter, Facebook, or YouTube, to which McDonald's will respond.

Foolish thoughts
McDonald's is leveraging its position to steadily respond to changing tastes and preferences, instead of messing things up in haste. It may take some time, but McDonald's customizable burgers, healthier food options, and expanded breakfast menu, along with focused marketing strategies should help the company gradually recover in the domestic market.