Please ensure Javascript is enabled for purposes of website accessibility
Free Article Join Over 1 Million Premium Members And Get More In-Depth Stock Guidance and Research
By Justin Loiseau - Oct 25, 2014 at 12:00AM

Is Atlantic Power Corp. ever going to make its comeback?

Atlantic Power Corp. ( AT ) continues to tempt investors with its dynamite distribution. But its 16% dividend just got a major haircut -- and things aren't looking much better than before. Here are three reasons Atlantic Power's dividend still isn't for you.

1. Sell, baby, sell?
There's no denying that Atlantic Power has hit hard times. In the past year, this dividend stock lost 55% of its value. During the same period, the S&P 500 ( ^GSPC -1.18% ) gained a respectable 12%. That's changed the investment thesis for many investors and made Atlantic Power a potential buyout opportunity for other corporations.

Investors love nothing more than sweeping up a company's stock just before it sells at a premium. It's like walking into a shop, buying some candy, and then immediately selling it to a greedy kid for a substantial mark-up.

But for long-term investors, speculating on sales is not a sustainable strategy. That mark-up value is often built into a stock price, and things can go sour quickly if the sale doesn't work out.

In mid-September, Atlantic Power announced its decision to remain independent, stoking an immediate exit from investors that, in a single day, dropped its stock price 33%. No matter how big a dividend is, no income investor wants to see a third of their stock's value disappear in a day. 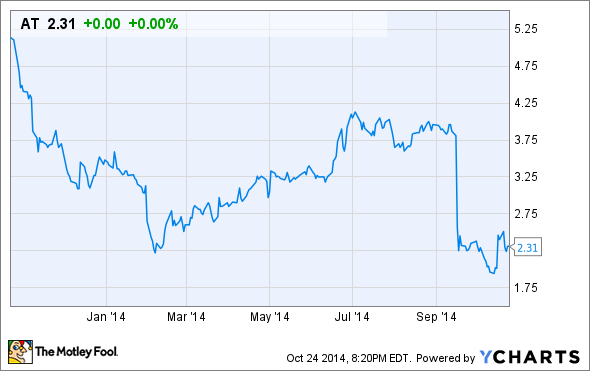 2. Size matters
With current stock prices near their all-time low, you might think now is the time to get in on an undervalued stock with a big 'ol dividend. But Atlantic Power's market presence has officially entered the danger zone.

With a market capitalization just shy of $300 million, investing in this stock is like driving a go-kart on the interstate. A single sell decision by one of Atlantic's top holders will influence the price in and of itself and could potentially trip another sell-off.

For a $300 million company already on the rocks, those are substantial slices of Atlantic's total shares -- slices any investor doesn't want to suddenly disappear.

If you're looking for a 16% dividend yield, you're too late. Even Atlantic Power's dividend, the carrot on the stick itself, is a reason to stay away.

At the same time Atlantic announced its decision to stay independent, it also slashed its annual dividend from C$0.40 ($0.36 in U.S. terms) to C$0.12 ($0.11) and switched from monthly distributions to a quarterly schedule. That means its 16% annual yield is now a 4% yield.

As part of the strategic review process, the Board of Directors, together with management, assessed the best uses of currently anticipated Free Cash Flow in order to meet the Company's objectives, including enhancing the value of existing assets, delevering its balance sheet to improve both its cost of capital and ability to compete for new investments, and providing a current return to its shareholders.

The decision is long overdue -- but it's still not enough. Corporations should distribute dividends only when it's the best possible way to create shareholder value. That means maintenance, capital expenditures, and paying off debt should all be taken care of beforehand.

For Atlantic Power, its unbalanced books simply don't support a dividend. Its debt is more than two and a half times its total equity (debt-to-equity ratio), net income has been in the red for the past five years, and its latest Q2 earnings loss was almost twice as bad as analysts had expected.

The company has better things to do with its cash, and it continues to do long-term income investors a disservice.