Please ensure Javascript is enabled for purposes of website accessibility
Log In Help Join The Motley Fool
Free Article Join Over 1 Million Premium Members And Get More In-Depth Stock Guidance and Research
By Adam Galas - Oct 26, 2014 at 11:18AM

There is a little-known way of analyzing the growth potential of energy companies, and when you look at Kinder Morgan through this lens, you see something amazing.

Today, I'd like to teach an important, but little-known way of analyzing capital-intensive companies like Kinder Morgan. This is a simple yet effective method of analyzing a company's future growth prospects to see if management is backing up its words with actions.

Don't panic -- I'm not going to turn this into an accounting class and bury you in financial minutia. This table actually represents a simple way to compare how much a company is investing in its infrastructure, which, in the case of Kinder Morgan, represents its primary earnings and dividend growth driver.

Capital expenditures, or capex, is simply the amount of money a company is investing in its assets. In the case of Kinder Morgan, that includes things like office buildings, pipelines, processing plants, and storage facilities.

Depreciation is how companies account for the fact that these kinds of assets wear out over time and need to be replaced. For example, if a pipeline costs $1 billion and is expected to last 30 years and require $100 million in maintenance over that time, then the depreciation for that pipeline would be $1.1 billion over 30 years, or $33.3 million per year.

So, what's the big deal about capex compared to depreciation? Simply put, a company like Kinder Morgan, which is dependent on its infrastructure to generate all of its revenues, earnings, and cash flows, and thus its dividends, needs to spend more on capex than it records as depreciation in order to grow.

This table shows that over the last five years, Kinder Morgan has invested 69% more into its business than it has depreciated.

That 159% increase in investment is due to the company's record backlog of projects, which rose by 5.3% this quarter (a 22.9% annualized growth rate), or $900 billion to $17.9 billion. Given that $1.1 billion in projects were put into service and thus removed from the backlog, this indicates Kinder was able to add $2 billion in new opportunities to its short-medium-term growth pipeline.

This is not surprising given that the company already had a potential backlog of projects of $18 billion that it was considering investing in, bringing its total backlog of future investment opportunities to $35 billion.

What about falling energy prices? 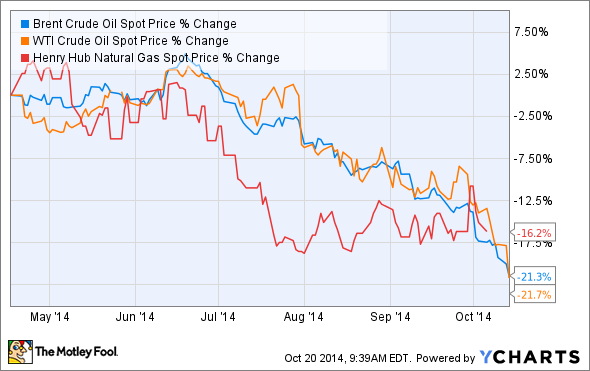 Recently, concerns over slowing economic growth around the world, as well as record production from shale oil and gas formations in the U.S., have resulted in oil and gas prices plunging.

Rising oil and gas demand is a megatrend likely to increase for decades. For example, according to the U.S. Energy Information Administration (EIA), U.S. gas production is expected to increase through 2040, driven by a projected rise in gas prices to $7.65 per thousand cubic feet. 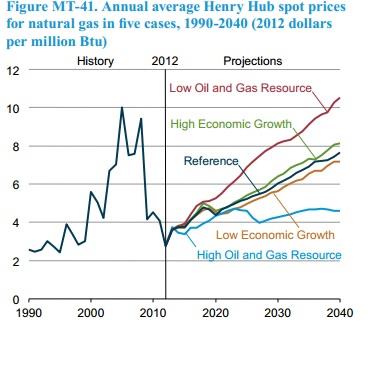 What will likely drive that price increase? Booming demand for gas courtesy of power plants switching to cleaner burning gas from coal (which emits twice the amount of greenhouse gases) and a strong LNG (liquefied natural gas) export trade to nations with far higher gas prices, such as Japan and the EU.

In addition, Kinder is set to benefit from the megatrend of rising oil demand (and likely higher long-term oil prices). This is because 20% of its cash flows in 2014 are derived from CO2 used in enhanced oil recovery.

According to a report by Morgan Stanley and Rystaad Energy, world oil demand in 2035 is expected to increase 15%-26% over today's levels, resulting in an oil price of $125/barrel to $150/barrel.Similarly, the EIA projects that rising demand for oil will result in likely oil prices in 2040 of $145/barrel to $205/barrel.

A long-term increase in the price of oil would increase demand for Kinder Morgan's CO2 pipelines, while rising natural gas prices and supply would produce massive growth for Kinder's midstream infrastructure for decades to come.

Bottom line
Analyzing a company's capital expenditures compared to its depreciation is a good way of verifying a companies growth prospects. With Kinder Morgan, we see that management is investing heavily in the company's infrastructure, courtesy of its fast-growing project backlog. This backlog is a result of a major energy megatrend that is likely to last decades and result in many years of superior earnings and dividend growth. That, in turn, is why I continue to view Kinder Morgan as one of the best long-term high-yield dividend growth stocks that income investors, and especially retirees, can own at this time.