International Game Technology is a leading manufacturer and developer of gaming equipment for casinos, such as slot machines. With the company set to be acquired by GTECH, is it still a good idea to buy in?

The Wheel of Fortune progressive slot machines introduced by IGT in 1996 are still the most popular gaming machines of all time. Source: wikipedia

The company sells its equipment all over the world; however, the vast majority (almost 80%) of its revenue comes from the United States and Canada.

In July, the company agreed to be acquired by GTECH, a global casino gaming leader, and the deal is expected to be completed in the second quarter of 2015. So, is it worth getting into IGT before the deal closes?

The deal
Under the terms of the acquisition, IGT is to be acquired for $4.7 billion in cash and stock, and GTECH will assume the company's $1.7 billion in debt, for a total value of $6.4 billion. The company will then be combined with GTECH in a new holding company based in the United Kingdom.

International Game Technology's existing shareholders will each receive $13.69 per share in cash, as well as 0.1819 shares in the newly created company, which produces a total value of $18.25 for each IGT share.

According to GTECH's CEO Marco Sala, the deal will be transformational for both companies, as they currently have very little overlap in their businesses, and it will give the company leading positions in many areas of the gaming business.

Why invest in the casino gaming industry?
Not too long ago, there were really only two places in the United States where you could find big casinos: Las Vegas or Atlantic City. Now, more states are legalizing gambling, and there is at least one large casino within a day's drive of most Americans.

And, the trend looks to be continuing. For example, plans were recently announced to build gaming facilities at the Meadowlands sports complex in New Jersey. A large casino is about to open in Baltimore. Some industry experts predict that it's just a matter of time before there is casino gaming in every major city in the country.

Why the new company could make money
The increasing competition in the casino industry may ultimately be a negative for the casinos themselves, but it could be a very good thing for International Game Technology.

As more casinos open in closer proximity to one another, there will naturally be a competitive drive to attract customers. And part of this will likely mean keeping casinos stocked with the latest and greatest equipment.

So, not only will IGT have more casinos to buy their equipment, but there is also a very good chance those casinos will upgrade their gaming equipment more frequently in order to keep a competitive advantage in a growing marketplace.

A quick 13%, and then what?
As of this writing, International Game Technology trades for about $16.20 per share. 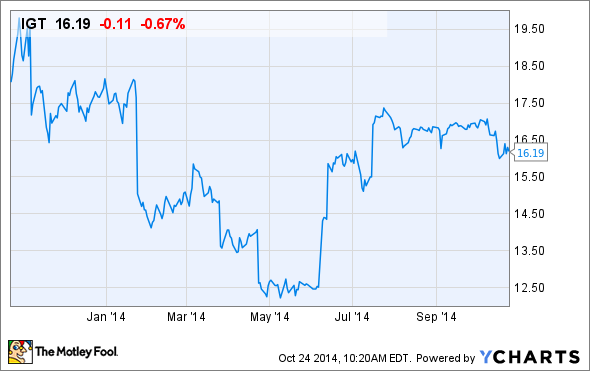 As long as the acquisition proceeds as expected, investors stand to make a 13% gain in about six months (eight months at the longest, depending on when the deal actually closes). All signs point toward approval. Both companies' boards have already approved the deal, and there shouldn't be any antitrust issues, since IGT and GTECH both have very different businesses. Additionally, GTECH has already secured binding commitments to finance the deal from Credit Suisse, Barclays, and Citigroup.

Not only is there a quick opportunity for a relatively certain gain, here, but the combined company could be one to watch as well. As I mentioned earlier, the U.S. casino industry is spreading out geographically, which means more new slot machines will be needed for new operations as well as to upgrade older casinos that want to remain competitive.

The new deal will also create cost-saving synergies in regards to product distribution and technological development.

In addition to being a pretty certain "acquisition play," International Game Technology could be the way to get into the next market-leading gaming operation at a nice discount.