Twenty years ago, the thought of a grocer focusing heavily on higher-priced natural and organic projects was nothing more than a pipe dream. "Nobody cares about where their food comes from, and no one is willing to pay higher prices for organic goods," was what the naysayers thought.

A lot can happen in two decades, though. A new generation of consumers went to school when concerns about the environment were front and center; eye-opening documentaries were made about where our food comes from and what it does to us; and trends shifted to make buying local and organic goods "cool."

No one foresaw -- or, indeed, helped forge -- this shift more visibly than Whole Foods Market (NASDAQ:WFM). Co-founder John Mackey believed in combining the power of capitalism and healthy eating long ago -- when he decided to leave his commune and start his own business, because he thought it was the best way to create something positive for the world.

But with its success, Whole Foods has attracted tons of competition into the market. Small, boutique grocers that used to have the same focus as Whole Foods -- but on a much smaller scale -- have moved on from their founders.

In their stead, private equity firms -- who are experts at building value yet may lack the spirit and connection with organic consumers -- have injected large amounts of capital into these mom-and-pop operations and taken them public. Sprouts Farmers Market (NASDAQ:SFM), Natural Grocers by Vitamin Cottage (NYSE:NGVC), and The Fresh Market (NASDAQ: TFM) -- to name a few -- are now looking to expand their footprints considerably within the next few decades.

If Whole Foods is going to succeed against this competition -- and, indeed, against bigger players moving into the organic realm like Wal-Mart (NYSE:WMT) and Kroger (NYSE:KR) -- it will only do so by remaining true to its motto: Whole Foods, Whole People, Whole Planet.

Earlier this month, Whole Foods announced that it had introduced its newest ratings system. Such systems are already in place for cleaning products, as well as meat and fish. But the most recent iteration focuses on fruits, vegetables, and flowers, and looks to add more color to the standard black-and-white distinction between organic and non-organic goods. 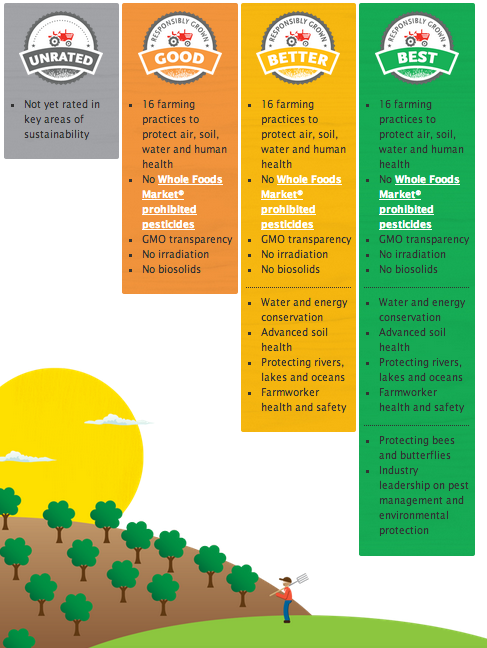 For those who might have trouble with the small print, the labels will range between "Good," "Better," and "Best." The variables of interest include GMO transparency, the use of certain pesticides, water use, farm worker safety, and the protection of bees and butterflies.

Matt Rogers, global produce coordinator for Whole Foods, told The Guardian that the initiative wouldn't raise the price of goods, and could actually result in higher sales for the company -- as people feel better about what they're buying when they are more informed.

That said, I think it's wise for investors expect that over the short term, such initiatives are unlikely to create any noticeable difference in the company's top or bottom lines.

In the long run, however, informing consumers about where their food comes from -- and what effect its production has had on the larger environment -- will be a crucial differentiator for Whole Foods. This effect will likely result in millions of very small wins when it comes to individual customers. It should especially resonate with younger generations, who are intimately attuned to the perils of our current food-production chain.