There has been plenty of chatter among investors that Intel's (NASDAQ:INTC) chip manufacturing technology lead over the rest of the industry could be set to "shrink." This speculation is mainly due to the two major semiconductor foundries -- Taiwan Semiconductor (NYSE:TSM) and Samsung (NASDAQOTH: SSNLF) -- having been optimistic about their progress in developing their respective 16-nanometer and 14-nanometer chip manufacturing technologies.

However, after listening to the earnings call of chip equipment vendor Ultratech (NASDAQ:UTEK), it's clear to me that neither TSMC nor Samsung quite has the FinFET transistor structure (which promises higher performing transistors at lower power) figured out. This, as far as I can tell, strongly suggests that Intel's manufacturing lead remains intact.

Let's take a closer look at the evidence.

Another order push-out for Ultratech

Ultratech is a chip equipment company that has missed revenue estimates for multiple quarters as orders for equipment related to the manufacture of FinFET chips keep getting pushed out. Unsurprisingly, the company just reported yet another huge revenue and earnings per share miss, claiming that "a major logic manufacturer delayed their FinFET ramp."

In particular, the company had expected to ship tools to this major logic customer (a reasonable guess would be that this is Samsung), only to have that order pushed out yet another quarter.

Why the push-out?
The reason these orders were pushed out is simple: The major foundries still don't have viable yield rates on their respective FinFET processes. In fact, according to Ultratech CEO Art Zafiropoulo, the yield rates at the major foundries is between 10%-20%. This is nowhere close to acceptable for high-volume production at reasonable cost.

Intel is in high-volume on 14-nanometer, but even it is seeing challenges
Intel is building chips on its own 14-nanometer process today. While the phrase "in high volume manufacturing" implies that Intel has good yields, CEO Brian Krzanich did point out on Intel's most recent earnings call that the yield rates there aren't where Intel would like them to be. 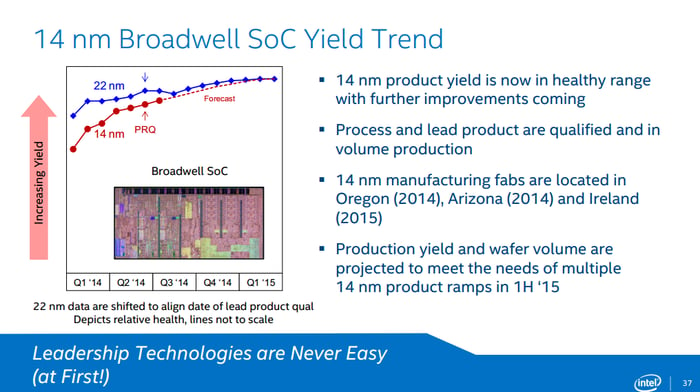 In fact, respected industry analyst Pat Moorhead, writing for Forbes, estimates from this graph that Intel's 14-nanometer process yields were within "5-10%" of where 22-nanometer was at the same point in its ramp. Given where Intel is right now in terms of yields, and given that it should have a meaningful lead in process density relative to its peers at its 14-nanometer node, it seems Intel's manufacturing lead remains intact.

What does this mean for Intel, though?
In terms of Intel's PC businesses, I believe Intel's apparent manufacturing lead will allow it to gain further share at the expense of Advanced Micro Devices (NYSE: AMD). Intel's server chip business should also continue to benefit from a manufacturing technology lead over the various ARM (NASDAQ: ARMH) server players.

The question gets a bit trickier in the mobile market (i.e., smartphones and tablets). Intel has typically not released mobile products based on its latest manufacturing technology until after it releases its PC products, although Intel has indicated that it would like to change this. Further, despite a technology manufacturing advantage, Intel's mobile designs have often lacked critical features, offered less-than-leadership performance, arrived late, and have even had cost issues at the platform level.

Intel had stated that its upcoming Broxton platform would be the one to offer "leadership performance for hero devices," but there is reason to believe the platform will be delayed into 2016. So, while Intel still appears to have a manufacturing lead with respect to mobile processors, it's not clear when Intel will be able to translate that manufacturing lead into amazing mobile processors.