Please ensure Javascript is enabled for purposes of website accessibility
Log In Help Join The Motley Fool
Free Article Join Over 1 Million Premium Members And Get More In-Depth Stock Guidance and Research
By Leo Sun – Oct 30, 2014 at 9:30AM

Should investors take a closer look at gunmaker Sturm Ruger?

"Sin stocks" are often considered a safe haven for investors when the market gets frothy. While most people immediately think of tobacco, alcohol, or casino stocks as fitting into this group, they also include firearm stocks.

There are only two major publicly traded gun companies in the United States: Sturm Ruger (RGR 0.07%) and Smith & Wesson (SWBI -0.17%). Both stocks have performed terribly, with the former falling 33% and the latter sliding 20% year to date. However, both companies have been traded more on gun crime and gun control headlines than on their financial performance. Therefore, let's look at both stocks and see if either one is a worthy sin stock to buy.

Valuation and financial performance
To start, let's compare the price, revenue, and earnings performances of Sturm Ruger and Smith & Wesson over the past five years, as well as how the stocks did in comparison to the S&P 500: 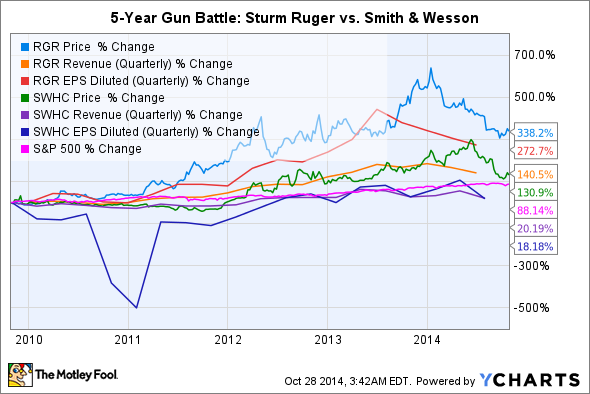 Sturm Ruger flattens Smith & Wesson in all three categories. Next, we should measure the two companies' valuation ratios based on current prices:

Smith & Wesson is "cheaper" based on its P/E and P/S multiples, but Sturm Ruger is clearly a more compelling investment, based on its clean balance sheet, beefier margins, and hefty dividend yield.

A recent analysis conducted by the Harvard University School of Public Health and Northeastern University found that the number of mass shootings (random attacks in which at least four people were killed) in the United States has tripled since 2011. That hints at more attempts to boost regulation of firearm sales in the future, as outlined by President Barack Obama's 23-point plan to curb gun violence following the Sandy Hook Elementary shooting in Newtown, Conn., in December 2012. Although that plan actually led to a panic-induced spike in firearm sales last year, the successful passage of new legislation would eventually throttle sales for gun manufacturers.

However, gun owners don't take kindly to gun companies negotiating with the government. Back in 2000, Smith & Wesson signed a historic agreement with the Clinton administration that enforced safety and design standards, restrictions on magazine sizes, and limits on the sale and distribution of firearms. In response, the National Rifle Association called for a boycott of Smith & Wesson, causing the company's annual revenue to plummet 37% year over year from 2000 to 2001. Therefore, Sturm Ruger could be caught between a rock and a hard place if the government tightens regulations and pressures it to sign a similar compromise.

As I previously mentioned, Sales of guns spiked last year over fear of bans on sales of new guns, especially assault rifles, before cooling down in 2014. This can be seen in Sturm Ruger's slowdown in quarterly sales growth over the past four quarters:

Strengths and opportunities
Despite that downturn in quarterly sales, there is evidence that gun sales are stabilizing. Based on National Instant Criminal Background Check System, or NICS, numbers, gun sales have merely returned to 2012 levels. In fact, NICS checks actually rose 4% year over year to 1,447,485 in September 2014.

This figure indicates that the downside for gun stocks could actually be limited. If Sturm Ruger can show top-line improvement in the third and fourth quarters of 2014, the stock could quickly bounce back toward 2013 levels.

Ironically, Sturm Ruger investors should actually hope for the threat (not the passage) of new gun control regulations, since the last threat in late 2012 and early 2013 led to a surge in panic-fueled sales. Last but not last, investors should remember that Sturm Ruger is less exposed to the controversial assault rifles market than Smith & Wesson and other privately held gun companies, since it sells fewer such weapons..

The road ahead
Going forward, Sturm Ruger's new products, like its 9 mm lightweight compact revolver, could boost its top line, as new products accounted for 18% of its top line last quarter.

Sturm Ruger and Smith & Wesson will both likely face headline-driven volatility in the near term, but it would be naive to believe that their businesses will ever dry up. Considering that 39% of American households owned guns in 2013, according to an Economist/YouGov survey, it should only be a matter of time before these two stocks bounce back from their 52-week lows.