Boeing (NYSE:BA) is witnessing phenomenal demand for its best seller, the 737. The plane's unmatched efficiency, outstanding performance, and commendable reliability are attracting heavy orders as demand for narrow-body planes rises. In view of the strong market demand, Boeing has decided to boost its 737 production rate to 52 a month in 2018. Is it a safe move, or is there an element of risk? And what impact could it have on the company's cash flows? Here's the lowdown.

Increasing production rate -- the right choice?
Boeing produces 42 737s a month, and earlier announced that it would increase the capacity to 47 in 2017. The company serves 266 customers around the globe that have placed orders for more than 12,100 737s to date -- 6,800 for Next-Generation 737s and 2,200 for 737 Max. Presently, the company's order book shows more than 4,000 unfilled orders for this aircraft. Boeing's Commercial Airplanes president and CEO Ray Conner touts factors such as "lower operating economics" and "better passenger experience" that make the plane the preferred choice of carriers, either for fleet expansion or replacement.

Boeing realizes that under the earlier production ramp up plan, it may not be able to tap the mounting demand and compete with Airbus (OTC:EADSY) more effectively. The European aircraft maker is mulling production rate hikes after it starts rolling out the A320neo in the last quarter of 2015. While Airbus plans to speed up production from the current 42-46 a month in 2016, it's also considering pushing it up to 50 in the future.

Considering these factors Boeing's strategizing to increase the production level to 52 a month, so that it can dispatch 620 737s a year, significantly up from 504 now. If the company proceeds with the output plan for all its jets, including the 777 and 787 wide-bodies, then its annual deliveries could shoot up to 900 from 648 delivered in 2013, and around 725 expected in the current fiscal year. 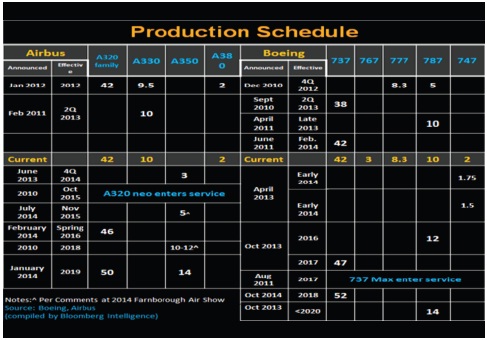 Undeniably, jacking up the production rate showcases Boeing's confidence in its engineering capabilities, manufacturing setup, and the supply chain network. But a question arises as to whether sustaining the 737 production increase to such record levels is feasible in the long run.

A well-planned move to cater to demand and increase market share
Augmenting production involves reasonable spending as manufacturing units have to be expanded, and backward integration and supply chain ties have to be set up. Component makers, too, have to plan their capacity in expectation of orders from plane makers. Thus, enhancing output is a very crucial decision. UBS analysts estimate demand for 1,019 single aisle planes in 2018, which is precariously below Airbus' and Boeing's total increased annual output of 1,224 at that point in time.

But Boeing is convinced that the single-aisle market is booming, and the time's right to decide on production levels. The company forecasts that airlines and aircraft leasing companies would need around 25,680 narrow-body planes over the next 20 years, which is approximately $2.56 trillion in list price. The demand is seen coming from the developed countries' need to replace old fleets and from the developing countries' growing low-cost carriers.

Expecting to win a fair share of this, Boeing's decision could be justified. The hike is planned for 2018 -- a year after the 737 Max enters service. With higher production, the company would be able to deliver both 737 Max and the current generation in full swing.

Boeing Commercial Airplanes' VP of marketing Randy Tinseth told Reuters that such considerations are made only after the plane maker senses "real" demand, and is certain about its capability of upholding operation "at that higher rate for a substantial period of time in order for us to recognize the benefits of the higher rate as well as our supply chain." Tinseth is convinced, after taking clues from the past decade where he's observed "resilient demand for the 737," that 52-a-month production rate aptly replicates the demand for these planes.

Impact on key financial metrics
Churning out more planes and increasing the delivery count would help boost the top line as the bulk of the money is paid on delivery. The positive effect should also trickle down to Boeing's bottom line through higher profits and enhanced margins.

Also, as the 737 constitutes the majority of Boeing's deliveries, cash flows will improve with higher production and dispatches. This is particularly important, as the company is finding it difficult to attract orders for its 777 until the 777X enters service in 2020. Regular cash generation from the 737 program could help offset weaker cash flows from the 777 program during that period.

Sustaining raised capacity comfortably year after year is a natural concern. There could even be some temporary hiccups if supply exceeds demand in the next few years. However, Boeing's plan to gear up production levels could turn out to be the right decision if the demand for narrow-bodies over the next two decades shapes up the way it's expected to. The company would be able to clear backlogs faster and improve its cash generation.