It's no secret that the automotive industry in the U.S. has been surging; in fact, new-car sales have practically been on fire over the last year. August's and September's Seasonally Adjusted Annual Rate, or SAAR, of 17.5 million and 16.4 million units, respectively, look to propel the U.S. auto industry to sales heights not seen in nearly a full decade. 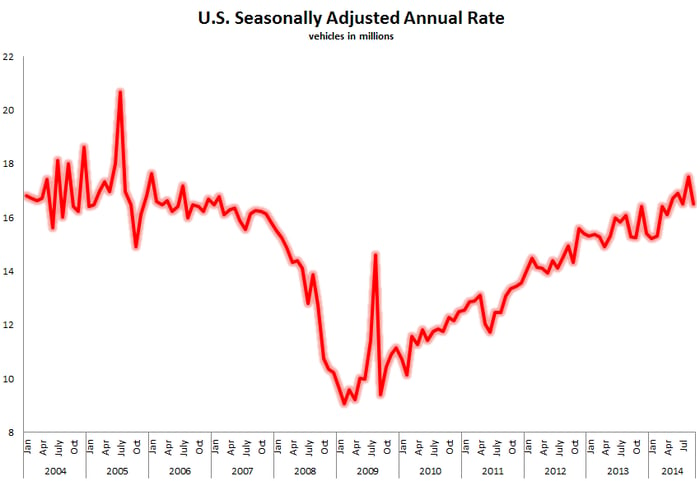 However, despite momentum entirely in the industry's favor, and automakers producing better vehicles than ever, there are clear speed bumps looming. Here are two, among many, that are often overlooked during good times.

Where have the young gone?
There are many consumer targets within the automotive industry, but one of the most important is first-time and younger buyers. The reason is simple: The auto industry is fiercely competitive, and fiercely loyal. Automakers want young buyers, and they want to convince them to come back when it's time for a new purchase.

In addition to increasing student loan burdens, there's also a growing trend of urbanization among youth. As more and more young people trend toward leading urban lifestyles, the percentage of U.S. households with one vehicle, instead of the traditional two, is increasing. That's simply because more people are relying on public transit and ride-sharing options.

That's not the only potential speed bump that could slow U.S. automotive industry sales in the medium to long term.

Extended loan lengths
In the early 2000s, a 60-month car loan was considered typical. Now that loan length has been replaced by a 72-month auto loan, with some consumers even opting for a seven-year loan. The reasoning is fairly simple. On one hand, you have consistently rising new car prices as automakers continue to load features and technology into the rides. On the other hand, you have easily available and cheap credit, and low interest rates make longer loan lengths easier to swallow.

The problem with this could be an extended replacement cycle. While consumers may be OK with paying a little more over a longer period of time, it will also push out the length of time a consumer spends underwater on the loan. That could mean the difference between a consumer replacing his vehicle the first time he drives onto a dealer lot to look and instead driving off to wait another year. A year-long delay in many consumers' purchase cycle could slowly take a substantial bite out of new-car sales, over the long term.

Ultimately, at least right now, there's no reason to suggest that the automotive industry's surge in new-car sales will slow down in the short term -- and that's reason to cheer. However, savvy investors looking at value plays in the automotive industry will want to keep an eye on consumer debt loads in the years ahead, as well as delinquencies on those debt burdens to better understand how big-ticket purchases -- such as new vehicles -- could be affected.