First Solar (NASDAQ:FSLR) stock is taking it on the chin today, dropping 10% in early trading. The company's third-quarter earnings results came in slightly below expectations, as did guidance, but the market is clearly focusing on the fact that First Solar doesn't plan on launching a yieldco anytime soon.

Yieldcos are essentially companies that own solar projects and pay investors a dividend from the project's revenue. In a low-interest-rate environment they have become very popular, and solar stocks tend to rise and fall with speculation of whether a company will launch a yieldco. But it's not right for everyone, and First Solar is taking another path that might prove just as profitable over the long term.

The numbers
Before we get to the strategy and details of First Solar's future, let's go over the third-quarter numbers. Net sales landed at $889 million, earnings at $0.87 per share, and bookings year to date totaled 1.7 GW to just 1.1 GW in sales, a strong book-to-bill ratio.

The problem is that First Solar didn't hit Wall Street's revenue target of $1.05 billion, and adjusted earnings per share of $0.61 were $0.03 lower than anticipated. Plus, it lowered its own 2014 sales target range by $100 million, to $3.6 billion-$3.9 billion, and didn't announce the yieldco that some investors had expected. Add it all up and you have one disappointed market.

No yieldco
Management said it would not launch a yieldco anytime soon, but it will begin holding desirable assets on the balance sheet, similar to SunPower's (NASDAQ:SPWR) current "HoldCo/YieldCo" strategy. In fact, holding projects on the balance sheet is one of the reasons First Solar lowered its revenue guidance for the year.

Whether to launch a yieldco is a complicated decision for project developers today, and First Solar just didn't see the benefit at this time. But it will begin holding assets until after completion and then sell them to buyers, like other yieldcos. This is also something SunPower has said it will do, and the strategy should increase margins for both companies.

Growth could be strong in 2015
One surprising announcement during the earnings call, considering the generally weak performance in 2014, is that First Solar is restarting its idled Malaysian manufacturing plant and in total could add 46% to capacity next year. 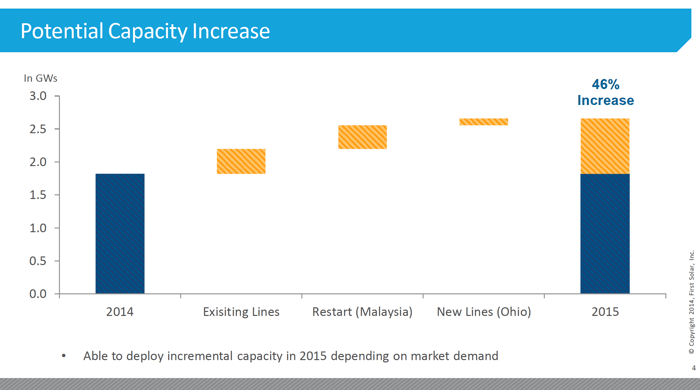 Bullishness on demand for 2015 and 2016 is driven by planned efficiency improvements, which will make First Solar's panels more competitive in the market, and an expected bump in project demand in anticipation of the expiration of the investment tax credit in 2017.

So while third-quarter results might have been a little disappointing, we could see a big jump in profits in the next two years.

Technology isn't improving as fast as projected
The biggest thing holding First Solar back from taking a larger market share in solar is the fact that its product is less efficient than even commodity solar panels from China. Without a cost advantage, that's a recipe for disaster.

Management realizes this and doubled down on efficiency improvements, but we might not see them as fast as executives anticipated. Fourth-quarter panel efficiency is expected to average 14.4%, up from 14.2% in the second quarter but well below the 14.9% target the company set earlier this year. This is a big deal over the long term because management projects fleet efficiency of 17.2% in 2017; if it can't hit that number, First Solar will likely continue to be dragged down by the anchor of a far less efficient product than its competitors'.

I'm not worried about an earnings miss here and there, but I do pay a lot of attention to efficiency, especially at First Solar. Strategically, the company simply can't survive by holding pat on its current technology -- to remain competitive it has to increase efficiency dramatically. Plans are in place to do that, but so far we're not seeing the fruit of that labor.

First Solar hanging on but not wowing investors
With the solar industry growing rapidly, costs coming down, and competitors' efficiency improving, First Solar is in a tough strategic position. On one hand, it's one of the most profitable solar companies in the world and continues to churn out earnings despite its challenges.

On the other, unless the company's technology improves quickly, it will be left in the dust by competitors that are lowering costs more quickly than First Solar is increasing efficiency. SunPower already has a 21.5%-efficient panel on the market, and I expect another incremental improvement in 2015. First Solar's road map doesn't even hit 17.2% until 2017, and there's a chance it can't execute on that.

I'd like to buy into the First Solar story, but I don't think playing from behind in the solar industry is where investors want to be. If management executes, the upside for the stock is tremendous. However, the execution risk is high, and I'll take a lower-risk bet on companies that are playing from ahead. Efficiency is driving value in the solar industry today, and that's not First Solar's specialty.