Energy-drink leader Monster Beverage (NASDAQ:MNST) offered somewhat mixed results in its third-quarter earnings report after Thursday's closing bell. Analysts had expected $641.8 million in net revenue and $0.67 in earnings per share. Monster narrowly missed on the top line with $636 million in revenue, but its reported earnings of $0.70 came out ahead of Wall Street's bottom-line projections.

Investors barely touched Monster's shares in after-hours trading on Thursday, indicating a lack of either excitement or disappointment regarding the results. That's because this was a report largely devoid of real surprises, with Monster still in the interregnum between announcing a huge partnership with Coca-Cola (NYSE:KO) and actually putting that partnership to work. Monster's top and bottom lines are definitely starting to look like those of a maturing company with growing pricing power, as quarterly revenue growth has been lower in each of the past three quarters while EPS growth rates are at their highest levels in years: 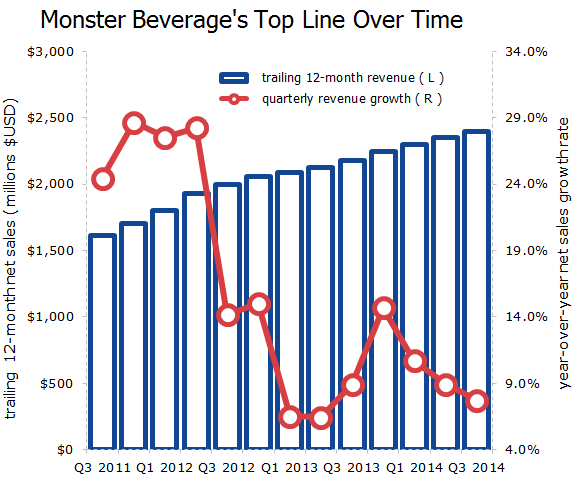 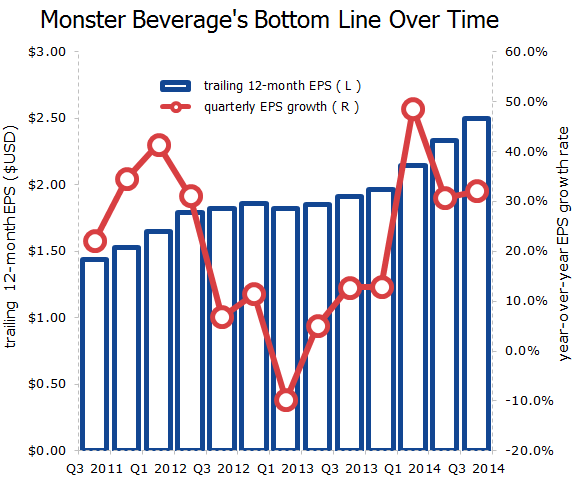 As you can see, Monster's revenue has now grown by less than 10% year-over-year in five of the past eight quarters, while its EPS growth is now advancing some of the fastest rates of this decade. Monster's trailing 12-month revenue is up by 49% from the third quarter of 2011 to the current quarter, while its EPS has grown by 74%. It's hard to interpret these results as anything other than a company that's reaching the limits of its market size but hasn't yet reached the limits of its power over that market. In the company's earnings call, Monster CEO Rodney Sacks highlighted some energy-drink market data from the end of October that supports this view. Sales of energy drinks were up 4.8% year-over-year in October, with Monster's 8% growth running ahead of the overall market. The company's market share in the convenience-store segment was essentially unchanged year-over-year at 36.3%, ahead of Red Bull's 34% share.

To better understand how Monster has propelled its earnings higher despite slowing growth, let's look at its case sales data: 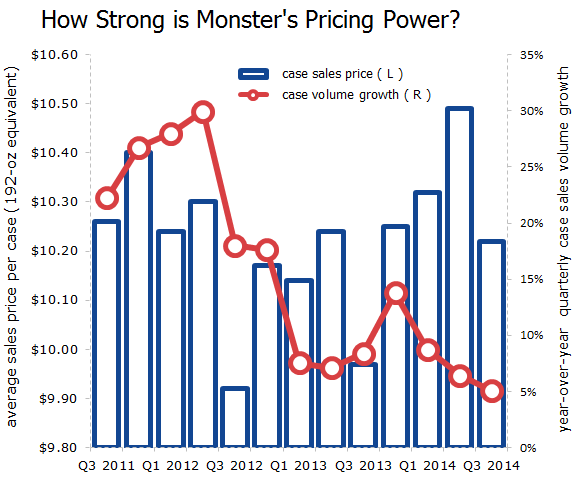 As you can see, Monster's case sales volume growth has progressed along more or less the same path as its revenue growth. However, Monster's ability to extract higher prices per case has strengthened recently after undergoing a period of weakness in 2013 -- the same period that produced some of Monster's weakest EPS growth rates. By compiling quarterly case sales prices into a trailing 12-month average, we can see a clearer correlation between sales prices and EPS growth: 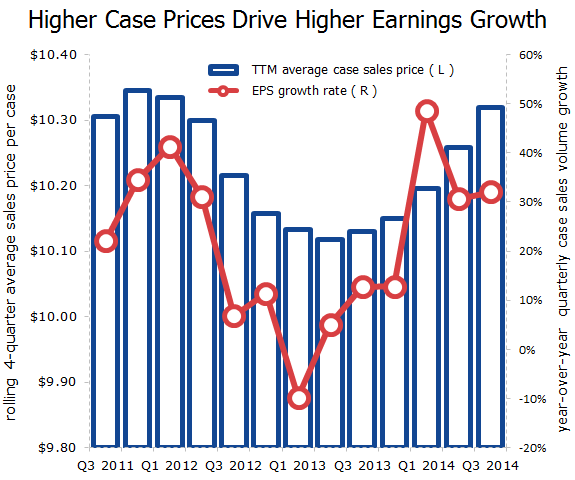 All in all, this was a rather business-as-usual quarter for Monster. It may be a while before investors can get a better idea of Coke's impact on Monster's business, as that deal isn't expected to close until the first quarter of 2015.