Few companies generate as much passion as the King of Retail, Wal-Mart. Photo: Flickr via Amelia Whelan

When it comes to retailers people love to hate, Wal-Mart (NYSE:WMT) is arguably the retailer with the worst reputation. It's castigated for its alleged shabby treatment of employees, hounded for driving out local grocers, and blamed for any number of wrongs plaguing the world.

But the pollsters at Nielsen would beg to disagree. They just released their 15th annual public opinion survey on the reputations of the 60 most visible companies, and the retailer topping the list -- or, rather, populating the bottom ranks -- of those held in lowest esteem was Sears Holdings (NASDAQ:SHLDQ), the once venerable old-line retailer that's in the midst of a disappearing act as divisions are sold or spun off and stores are closed.

While Wal-Mart did see its ranking in the Harris Poll survey fall from 40th place in 2013 to 44 this year, Sears was even lower than its retail rival, tumbling from 46th on the list to 53rd. Indeed, only financial institutions like those viewed as most responsible for the recent economic collapse, like Goldman Sachs and Bank of America, along with perennial whipping post Monsanto, fared worse.

Here's why Sears Holdings, once one of the most beloved retailers in the country, has long since fallen from grace.

The root of all evil
Following hedge fund operator Eddie Lampert's marriage of Sears, Roebuck and Kmart in 2004, the two retailers were already in decline and suffering from a lack of relevance in a world where mass marketers like Wal-Mart and Target were ascendant.

Unfortunately, Lampert's conquest did nothing to halt their diminution. First he engaged in financial gymnastics to temporarily make quarterly numbers, relying upon expensive share buybacks and fancy tricks like total return swaps to create the appearance of better performance, but when that stopped working, he infused the balance sheet with cash by selling off Sears' best assets.

Over the years, Lampert shed Orchard Supply, Sears Hometown & Outlet Stores, and most recently Land's End. He's eying a sale or spinoff of Sears Canada and is considering putting Sears Auto Center on the block as well. Along with his portfolio of aging stores in largely undesirable areas, Lampert's only got a few name brands left worth mentioning anymore: Kenmore appliances, Diehard batteries, and Craftsman tools.

Appliances are a fading star
And even their value is becoming more tenuous. Kenmore, for example, once the industry leader with a 40% share of the appliance market as recently as 2002, has fallen all the way below 30% today. Part of the explanation lies in Lampert's parsimony.

Sears had a long-standing relationship with Whirlpool (NYSE:WHR) that extended all the way back to 1916. Kenmore appliances were actually made by Whirlpool and the pact required new features be introduced on Kenmore products first before appearing on Whirlpool appliances. But Lampert dissolved the agreement in a bid to save money, choosing instead to partner with LG Electronics and Samsung.

Another example of Lampert's stinginess is his refusal to invest in his stores, maintaining Sears customers didn't want "decor and fixtures," so there was no point in upgrading them. That resulted in customers not wanting to shop in his stores either. 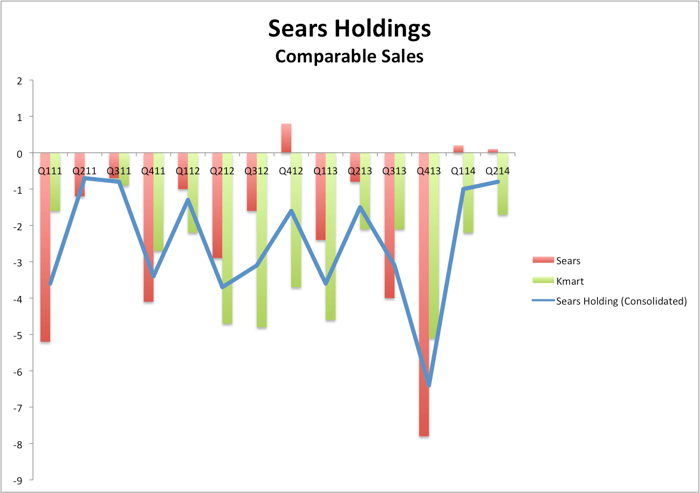 Slip sliding away. Sales at both Sears and Kmart are drying up. Data: Sears Holdings quarterly SEC filings.

Same store sales have been on a prolonged slide and there's no indication that's about to change anytime soon. While Sears has initiated its Shop Your Way loyalty program to help bolster its numbers, and it accounts for nearly three-quarters of its sales, it appears to have topped out and may even be in decline. Even if it holds steady, it's still eating away at Sears profits because the retailer continues to run twin promotional campaigns.

Customer loyalty aint what it used to be
Shop Your Way awards members points for purchases they make at Sears stores, Kmart, and through its website. The more a customer spends the more she saves as members can redeem points for merchandise. It's something like an airline's frequent flyer program. But for Sears, which is confronted with falling sales and declining customer traffic, the more people it signs the more the loyalty program actually accelerates its erosion of profits.

Sears is now routinely recording losses, which last year amounted to $1.37 billion, and over the last 12 months have hit nearly $1.9 billion.

Unlike Wal-Mart, the lack of confidence in and regard for Sears Holdings was completely avoidable. Had the retailer not been treated as a real estate-rich prize ready to be stripped of its assets, it may have actually made a go of it.

Sure, it suffered a setback because of the economic recession (which is likely why those financial companies have even worse reputations than the retailer), but others bounced back from the calamity and prospered because their owners were willing to invest in the future. Now Lampert has been forced to loan the business $400 million just to see it through the Christmas season.

He's also said, "It takes 20 years to build a reputation and five minutes to ruin it."

Sears Holdings dismal reputation hasn't been an overnight development, but rather a long time in coming. Let's just hope it's still in business next year that it will even be able to participate in future measures of consumer sentiment.

Believe It or Not, This Retailer Has the Worst Reputation (Hint: It's Not Wal-Mart) @themotleyfool #stocks $SHLDQ $WMT $WHR Next Article
Current