Please ensure Javascript is enabled for purposes of website accessibility
Log In Help Join The Motley Fool
Free Article Join Over 1 Million Premium Members And Get More In-Depth Stock Guidance and Research
By Rich Duprey - Oct 6, 2014 at 10:30AM

My how far the mighty have fallen, but the iconic retailer may not have hit bottom yet.

It's been a long way down for the once iconic retailer.

The drumbeat of bad news for Sears Holdings (SHLDQ) is rolling louder these days after its chairman was forced to open his hedge fund's pocketbook to loan the retailer $400 million to get it through the Christmas season and it was unable to find a buyer for Sears Canada, which led its CEO to announce his resignation.

Because things look bleak for the retailer, the question investors need to ask themselves is, after losing more than a third of its value in 2014 alone -- but 86% from its all-time high in 2007 -- is there any reason to expect it will be able to turn it around now? 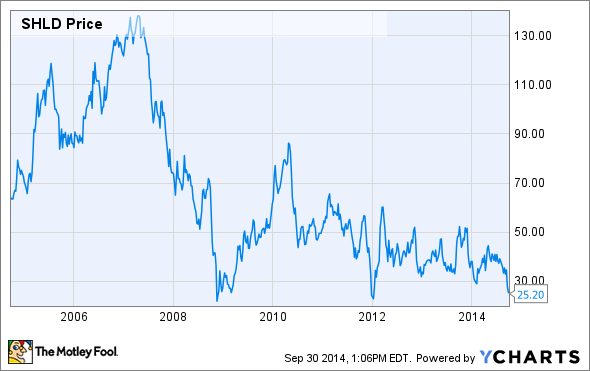 Thinner, leaner, but not necessarily in fighting shape

The coming holidays must be viewed as the ultimate test of Sears continued existence. It needs to prove that it can still connect with consumers in some meaningful way that shows it can be a retailer people want to shop at. Unfortunately, the only thing chairman and CEO Eddie Lampert seems to want to project is how adroit he is at stripping clean a business.

From asset sales to spinoffs, most of the tastiest morsels have been shed as a means to artificially inject cash into the company and pay shareholders, most prominently Lampert himself, tons of cash.

As a Yahoo! Finance piece pointed out recently, even the loan ESL Investments floated to Sears might benefit Lampert more than the retailer. He gets either $10 million in interest payments from the loan, or takes control of 25 of Sears properties. It's the latter that is the curious detail, because the retailer has valued its real estate at around $5 billion, but it's been estimated that the top 400 stores are worth around $18 million a piece. However, when they've actually been sold Sears has realized much higher prices than that, meaning Lampert would get some prime properties on the cheap.

There's still hope for change
Yet retailers on the ropes have turned themselves around before. Like Sears, Gap (GPS 3.03%) suffered from a plague of falling sales, declining profits, and fashion consumers didn't want. Although a lot of its troubles were brought on by the recession, it was able to remake itself and now reports growing sales, higher comps, and steadily rising profits. It has actually had to do it several times over the years.

Most recently J.C. Penney (JCPN.Q) was apparently able to walk itself back from the precipice by acknowledging what it had been doing was wrong and essentially giving customers what they want.

... but risks abound
Sears has plenty of company in retailers that look like they're clinging by their fingernails, including Best Buy (BBY 2.42%), Barnes & Noble (BKS), and Radio Shack (RSHCQ), because it's not easy to effect the recovery necessary, especially in retail. Investors are routinely warned about the perils associated with hoping against hope a retailer can right its wrongs, but the fact they do occur, and the returns generated are spectacular when that happens, allows hope to spring eternal.

A smaller Sears is definitely one of the things the retailer needs to do to survive. Photo: Flickr user Nicholas Eckhart.

Sears doesn't seem to be one of them, though.

It will be closing at least 130 underperforming stores, probably more, which is what it needs to do, but without investing in those that remain, putting money into "decor and fixtures," something Lampert says he would disdain doing, then we'll just keep seeing ever more stores getting lumped into that underperforming category.

And because it does retain some popular brand names, including Craftsman, Diehard, and Kenmore, as well as its auto business, there's the chance to reorganize around these opportunities. But Lampert seems more intent on getting rid of them to raise cash. After spinning off the profitable Land's End (LE 8.10%) he's turning his attention to Sears Auto Center unit as his next avenue for "strategic thinking."

Danger looms straight ahead
However, the failure to unload its 51% stake in Sears Canada may signal that there's a declining market for Sears assets. Selling the auto business or spinning it off might not raise the kind of money the retailer needs, but more importantly, what does it do once these businesses are gone.

Sears needs new thinking. When Lampert opted not to replace Louis D'Ambrosio, but chose instead to take over day-to-day control of the company by officially appointing himself CEO (many suspected before then he was already calling the shots), it was a test of whether a financier can also run a retail operation. I think the results have been telling and show, at least in this case, it hasn't been a good fit.

J.C. Penney brought back Mike Ullman as someone with a proven track record for successfully saving retailers, and thus far he's proven the decision was a wise one.

There is a chance Sears Holding would make a similar move, but that would necessitate Lampert admitting he was wrong and I'm not sure the 35% loss in value that investors have suffered this year is the last of the decline in store for the stock.