Last week, ConocoPhillips (NYSE:COP) reported better than expected third-quarter results, especially given the weakness in oil prices. However, on the company's conference call to discuss those results, management spent most of its time talking about its plans to deal with lower oil prices. Here are five things management wants investors to know about its ability to adapt to lower oil prices.

I'll begin our call this morning with some remarks about the current environment. Let me just say that while the recent oil price downturn seems sudden, we're well positioned as a company to respond without impacting our strategic objectives of 3% to 5% volume and margin growth. This is key and it's the result of a significant repositioning we've achieved as a company in the past two years. We've cored up the portfolio; lowered the overall cost of supply; and significantly increased our degree of capital flexibility. And put this last point in a bit of perspective, in 2014, our committed capital for major projects and maintenance represents about 50% of our capital and this declines to approximately 30% by 2016.

CEO Ryan Lance started off the conference call noting that, from ConocoPhillips' perspective, the plunge in oil prices couldn't have come at a better time in the company's history. This is because the company's repositioning plan is complete and now its business is more flexible than ever. Last year was the peak year for spending on major projects and with that now in the past, the company can cut spending as it responds to market conditions: something it couldn't do as quickly just last year. 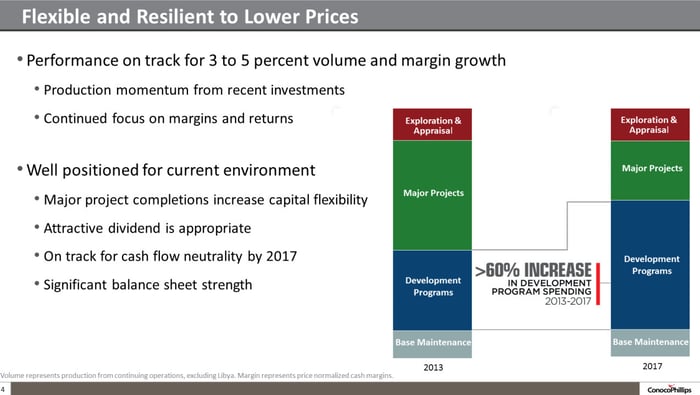 This is what matters

Another thing we want to emphasize is that events like the recent price downturn underscore the importance of staying focused on the fundamentals. We know this is a cyclical business and we've been here before. And certainly the old adages apply full-cycle, low-cost wins, asset quality matters and financial strength as an asset. We intend to make prudent adjustments at this time, while continuing to monitor the environment. – CEO Ryan Lance

ConocoPhillips has hammered home that its growth isn't just production -- it's production and margins. That focus on margins is important because it allows the company to still earn a lot of money even when prices drop. When combined with its strong asset base and solid financials, it will enable ConocoPhillips to not only survive, but thrive in almost any oil price environment. 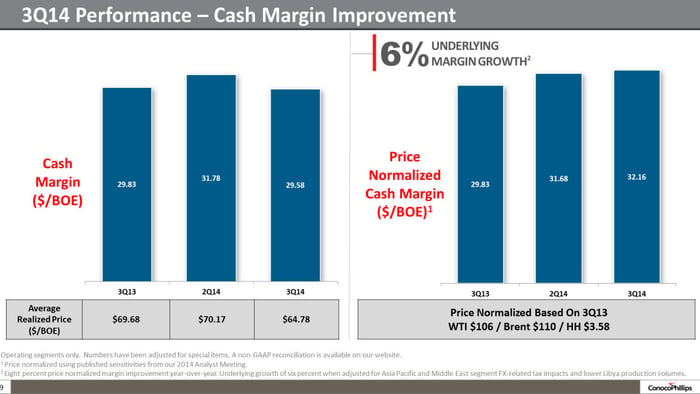 The dividend is safe

As we think about our capital levels going into 2015, we first consider all of our priorities for investment. As we have said consistently since this spin, our top priority is the dividend. This is an important part of our investment thesis. The dividend provides discipline on our capital allocation process and we believe it is important in a mature business, so no change to the outlook on the dividend. – CEO Ryan Lance

One of the reasons ConocoPhillips is focused on margins is because it wants to support a strong, growing dividend even when oil prices are volatile. That commitment was reaffirmed on the conference call as Mr. Lance said that a growing dividend remains the company's top priority.

We are currently in the process of setting our 2015 capital budget and we'll announce that later in December. What you should expect is that we will exercise the flexibility we have and announce a range of capital spending that is not only lower than 2015, but lower than our stated target of $16 billion per year. Across the lower 48 we can throttle back on our less mature unconventional plays, while continuing to invest in our highest margin short cash cycle projects in the Eagle Ford and the Bakken. These are the best returns on our portfolio and give us the confidence that we need to meet our volume target of 3% to 5% even with a bit lower capital next year. – CEO Ryan Lance

While the dividend will go up next year, capital spending will not. Not only will it drop from its peak of $16.7 billion this year, but it will likely head below the target of $16 billion the company set when it spun off Phillips 66 (NYSE:PSX). This is part of the flexibility Mr. Lance noted earlier when he pointed out that the company now has flexibility to cut spending because it's not in the middle of the peak spending year for major capital projects.

We've got a lot of flexibility in the Lower 48 and Canada portfolio and to manage our capital over this period without having a big impact on growth. So we're certainly not going to gut our exploration program. We need to maintain the exploration for the long-term organic growth of the company, and we're going to do that. – EVP, E&P Matt Fox

In discussing the potential capex cuts, Matt Fox noted again that the company has a lot of flexibility in what it can cut. For example, its likely to cut some spending in less developed unconventional areas like the Permian Basin and Niobrara as well as in the Montney and Duvernay shale plays in Canada. However, it won't completely gut its exploration program, but it simply won't spend money if the risk is too high. For example, ConocoPhillips already bowed out of the Coronado prospect in the Gulf of Mexico after it didn't like what it saw after additional testing. The company will instead focus its capital on only its best prospects.

ConocoPhillips couldn't have been in a better position to handle the recent plunge in oil prices. This is because the plunge is coming at a time when the company has more flexibility than ever as it just passed its spending peak, meaning it can now cut costs to match the downturn in prices. Not only that, but investors can rest assured that the company's dividend is not only safe, but a top priority.