Macau's month-over-month gross gambling revenue fell further last month than in any other month in its recent gambling history. Gross gambling revenues in October fell more than 23% from the month before. That performance follows a relatively weak Q2 and Q3 for nearly every gambling company on the Chinese island, including Las Vegas Sands (NYSE:LVS) , MGM Resorts International (NYSE:MGM), and Wynn Resorts (NASDAQ:WYNN). Many analysts and investors are worried that this trend marks the end of Macau's growth.

The area to watch: Macau's Cotai Strip
Macau is made up of three parts: Old Macau, Taipa, and Coloane. Old Macau was once the mecca of gambling on the island, and that's where MGM and Wynn have their casinos now. However, on the Taipa side, the Cotai strip of reclaimed land is booming as the new popular area where each casino company is building a megaresort to open in the next year or two. The strip is already mainly dominated by Las Vegas Sands, with the Venetian Macao, Four Seasons, Sands Cotai, and more. That dominance is about to increase.

Parisian construction from Sands Cotai balcony across the strip. Photo by the author, October 2014.

Las Vegas Sands is slated to open its Parisian resort toward the end of 2015. With 450 gambling tables, 2,500 slots, a retail mall, and a 50%-scale replica of the Eiffel Tower, making it nearly 500 feet tall (or 150 meters), this resort looks as if it will be a spectacular addition to the strip.

One important feature of Macau's future growth is the increase in mass market revenue, up 16% for Macau in Q3, year over year. Las Vegas Sands, already the leader in the number of hotel rooms in Macau, will be  adding over 3,000 rooms with the Parisian's opening, making Las Vegas Sands the biggest bet on a growing mass market in Macau.

Wynn is the company with the largest bet on Macau by percentage of its overall revenue. While Las Vegas Sands gets more than 85% of its revenue from Asia, that includes Singapore and Macau. Wynn Resorts, with Macau being its only Asian operation, earned more than two-thirds of its total Q3 global revenue from Macau. During Q1 of this year, that number was even higher, at around 75%, the decline owing to Wynn's being one of the bigger plays on the Chinese VIP market, a segment that was hit hard this summer.

Wynn is hoping to turn that trend around with the opening of its Wynn Palace on Cotai in 2016. This gambling resort, at a cost of $4 billion, is the most expensive of the new resorts coming to Cotai. It's an important bet for Wynn, and the company's management claims that this resort could double Wynn's Macau property revenue and EBITDA.

MGM: The last player to show its hand

MGM has been one of the most successful gambling companies this year, at least in terms of having the smallest drop in its share price. While Las Vegas Sands and Wynn Resorts were getting hammered by the Macau slowdown over the past two quarters, MGM has been able to hold off total revenue declines, since only around one-third of its revenue comes from Macau. Around half of MGM's revenue comes from Las Vegas, where the company's non-gambling revenue has picked up this summer and helped the company to report rising year-over-year revenue.

However, that isn't stopping MGM from also making a bet on Macau's Cotai strip. MGM's new resort, set to open at the end of 2016, and probably the last resort to open in this phase of development (following construction permit issues that seem to be resolved now), is a $2.9 billion bet. This resort won't actually be directly on the strip, but instead will be located behind the Sands Cotai and Sheraton Hotel that sit facing the strip, as seen in the back of the following photo. 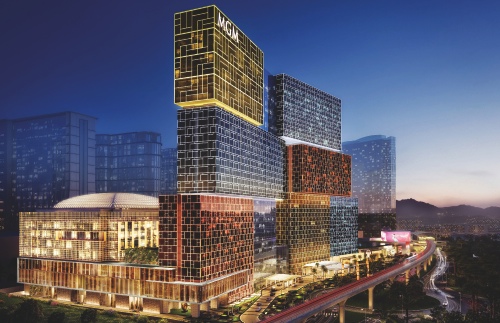 Rendered view of what MGM Cotai could look like. Source: MGM Resorts.

MGM only recently started releasing more details about this coming resort, letting investors in on plans for this 2 million-square-foot project. Management said the resort will include a "five-floor luxury mansion" that CEO James Murren said is a "hotel in a hotel." The resort will also include a massive private indoor garden for guests, "sky lofts" on top of the middle hotel tower, and presumably many other attractions.

The long-term story still looks like a strong bet
It's true that Macau's performance in the past two quarters has been particularly disheartening.The biggest reason for the drop in overall revenue in Macau over the summer and fall is the declining VIP segment, as China continues to put more stringent restrictions on third-party operators that draw those high-net-worth gamers to Macau. However, the important trend is that the mass market segment continues to grow in Macau, and that is what will drive growth over the long term. Following Las Vegas Sands', Wynn's, and MGM's lead, betting on Macau for the long term still looks like a good idea.