On Wednesday in San Francisco, Twitter (NYSE:TWTR) hosted its first-ever analyst day as a public company. Analyst days are fairly standard for public companies, giving management a chance to sell their story, clear the air of any outstanding questions, and generally take part in a lot of "rah-rah" activities.

Twitter, however, had more riding on its analyst day than most. Since going public last November, the microblogging company's stock price is up well over 50%. That is great news, but it is undermined by several long-standing issues, including the shuffling of its management team, anemic monthly average (MAU) growth, and significant engagement concerns. Twitter CEO Dick Costolo took pains to address the engagement issue in San Francisco, and rightfully so. My fellow Fool Adam Levy found a lot to be optimistic about in Twitter's analyst day, but I found Costolo's approach baffling, raising more questions than it answered.

The big day
After a brief welcome and introduction from new-ish Twitter CFO Anthony Noto, Costolo took the stage to get Twitter's party started. In Costolo's five-minute presentation, he introduced a few new, and potentially exciting, features Twitter fans can look forward to. As is the case with Facebook (NASDAQ:FB), Twitter recognizes the value of video, from both a user perspective and as an advertising platform, and intends to incorporate it to a greater extent in its service in hopes of enhancing the experience.

Twitter also plans on making things easier for new users, in keeping with Costolo's aim to "reduce barriers to consumption," by delivering an "instant timeline" for Twitter newbies that gives them a feed of content of interest to them before they start to follow other Twitter users. 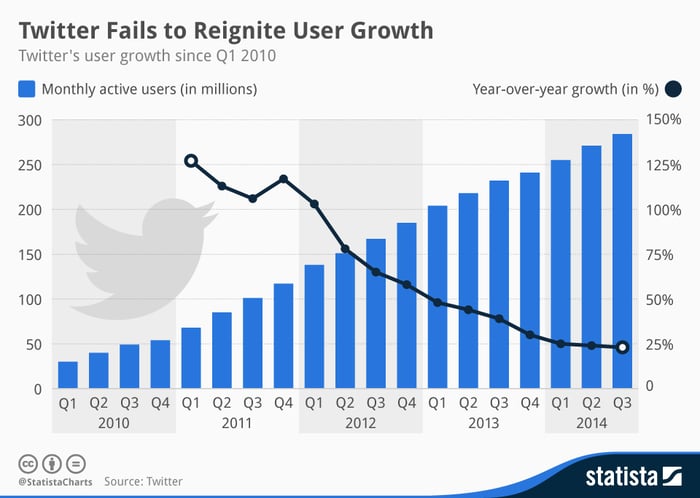 At this early stage in Twitter's growth cycle, and considering its low comparables, the third-quarter addition of 13 million MAUs, a 24% improvement over last year, is not impressive, nor was it close to enough to placate analysts. But making it easier to begin using Twitter, incorporating video, and improving its direct messaging solution are all designed to get Twitter to the coveted 1 billion MAU mark, a la Facebook.

Wait, that's the good news?
Costolo mentioned several times the number of visitors to Twitter who choose not to log in: more than 500 million per month. This is a figure industry pundits have been eager to learn. Costolo described these people as a fantastic opportunity. Of course, as CEO his job is to view whatever he can as half-full, even negative news.

In terms of user engagement, or lack thereof, over 500 million people who take a look-but-don't-touch approach to Twitter should raise a big red flag. When nearly twice as many people elect to not use a company's product or service as those who do, that's simply not good, no matter how the message is conveyed.

There's no denying Twitter investors who bought in at, or near, its $26 IPO price are enjoying some nice appreciation. Though with Twitter's meteoric 73% rise on day one, not many individuals were that fortunate. And therein lies the problem: Twitter's stock price is all over the map because there's no fundamental basis for its valuation. Based on Costolo's revelation that there are over 500 million Twitter visitors who don't use its service each month, as well as its anemic MAU growth, it will continue to trade like the momentum stock it is.

If social media as an industry intrigues you, look to Facebook, which already has three properties -- WhatsApp, Messenger, and Facebook itself -- with far more MAUs than Twitter. Instagram should join that list shortly, too. And Facebook has multiple, clearly defined avenues of growth that don't include relying on the monetization of its nonusers. Costolo can spin the 500 million plus visitors however he sees fit, but there's nothing good about Twitter visitors dropping by, not participating, not enrolling in the service, and then leaving: despite the CEO-speak.

We Fools are a motley bunch with a range of opinions. Click here to read Adam's article with a different take on the matter.