There's little doubt that someone, somewhere, is going to have to cut production, because the current prices are below sustainable levels for many producers, and if the prices fall further, it's going to create some real turmoil. The two most likely places for production cuts? OPEC producers, and U.S. shale. Furthermore, it's not really clear when the situation will clear up. With that in mind, here are three oil stocks that you should keep an eye on: Phillips 66 (NYSE:PSX), ConocoPhillips (NYSE:COP), and Continental Resources (NYSE:CLR). 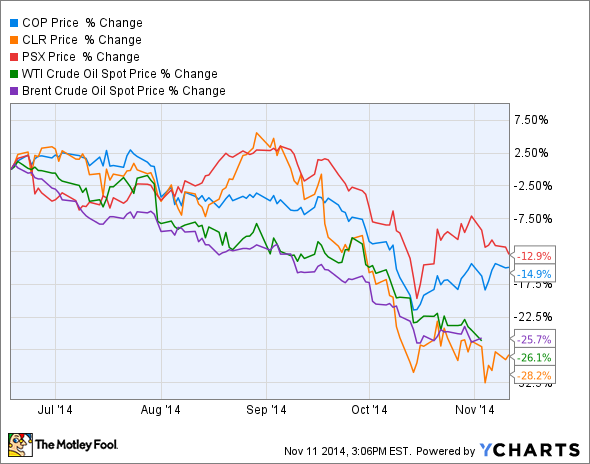 Low-cost U.S. production helps, but isn't enough
Since spinning off Phillips 66 in late 2011, ConocoPhillips has continued to divest assets. As of the end of last quarter, the total was almost $14 billion in proceeds from asset sales, with the majority -- $11.6 billion -- coming since the beginning of 2013. Don't get me wrong -- over the long term, it makes sense for ConocoPhillips to continue trimming the fat and focus on its core business, but the relevance is that a significant amount of the company's cash position is the result of these asset sales, and not the core business: 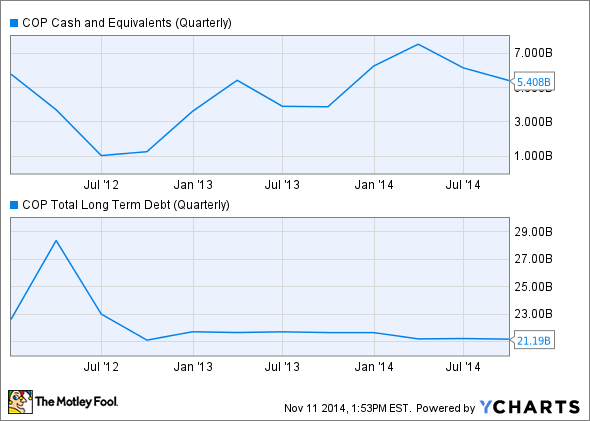 Furthermore, the company's debt level still remains high, and it pays a significant amount of cash -- $3.47 billion over the past 12 months -- in dividends. Management will talk about its low-cost advantage in U.S. shale production, and that's true... ...but there's a difference between profitable production, and bringing in enough profits to reach targets for the entire business. Even if ConocoPhillips is able to maintain or grow current production levels in the U.S., getting a lower price will impact its business. Furthermore, only 37% of total production comes from the company's U.S. shale plays, so this is only limited protection.

The spinoff is a better bet
Phillips 66, on the other hand, is in a completely different boat with regards to oil prices. When the companies were broken apart in late 2011, ConocoPhillips retained the exploration and production assets, while Phillips 66 kept the midstream, petrochemical, and downstream business. This created one business that was heavily exposed to the upside and downside of oil prices, in ConocoPhillips, and one that is much less so, in Phillips 66.

Phillips 66's business is primarily refining oil, transporting oil, gas, and the refined oil products to end markets, and its 50/50 joint venture with Chevron, CPChem. Yes, falling oil prices lead to falling gas and diesel prices, but its margins should remain strong. Furthermore, the company's pipeline business is largely protected by the long-term nature of its contracts.

The petrochemical business actually benefits when oil and natural gas prices fall, as these are the major inputs for the manufacture of many of the company's products. CPChem is expanding North American manufacturing capacity for the exact reasons prices are falling: The U.S. has massive reserves and production is expanding.

Continental's downside risk not to be ignored
Fellow Fool Matt DiLallo recently wrote about Continental Resources' decision to drop all of its oil hedging programs. Hedges are typically contracts to sell a portion of the company's oil production at a set price, which protects the downside, since the company knows exactly what it will get for the hedged part of its production. The flipside is that if the contracted price falls below market price, the company may leave profits on the table.

The thing is, in an uncertain pricing environment, removing all protection to the downside is foolhardy at best, and dangerous behavior with shareholders' capital at worst. But when you own more than two-thirds of the company -- as CEO Harold Hamm does -- you can make these potentially destructive calls.

Don't get me wrong. I hope that Hamm's call turns out the be right and not just bravado that harms his fellow shareholders. But at the end of the day, the stare-down with OPEC over production is about revenue dollars as much as it is about specific oil price levels for many of those countries. The downside for U.S. producers in the next six months is significant, and as much as I admire Hamm's leadership in expanding U.S. production, I'd stay far away from his company as an investor right now.

Risk, uncertainty, and the value of predictability
At the end of the day, both ConocoPhillips and Continental Resources are world-class producers, but the fact is, they are oil producers and there's no other segment of the oil business that's more exposed to the uncertainty around production and oil prices today. For now, that means investors are probably best off avoiding these two companies. ConocoPhillips is still rationalizing its operations and assets, while Continental is taking on unnecessary risk by dropping all of its hedging activity.

At the end of the day, these could both lead to losses in value that could take years to recover. It's just too hard to see past the current environment right now, and don't think that their stocks can keep falling -- they most certainly can.

Phillips 66, on the other hand, offers a much more stable business with far less exposure to oil prices. Demand for its refined and petrochemical products remains steady, and its financial position is incredibly strong. In the current market environment, the beating its stock price has taken since June is largely unwarranted. Between the three, it's certainly worthy a closer look for your portfolio.