Heads up, NVIDIA (NASDAQ:NVDA) investors, because Samsung (NASDAQOTH: SSNLF) has your favorite graphics chip specialist in its legal crosshairs.

According to NVIDIA, Samsung earlier this week filed a lawsuit against both it and Velocity Micro, a small Virginia-based NVIDIA customer.

A "predictable tactic"
That's not to say NVIDIA was shocked. Samsung's aggression comes in response to NVIDIA's own patent lawsuits -- its first in 21 years, by the way -- which were filed against both the South Korean conglomerate and chipmaker Qualcomm (NASDAQ:QCOM) just over two months ago.

"[W]e fully expected that we would be sued in response," NVIDIA Executive Vice President David Shannon stated in the blog post. "It's a predictable tactic."

The stakes are unquestionably high for Samsung and Qualcomm. In addition to requesting financial damages, NVIDIA also asked the U.S. International Trade Commission to block imports of all Samsung Galaxy devices containing the infringing technology. That list reads like a who's who of Samsung's most popular devices, including the Galaxy S4 and S5, Note 3, Tab S, Note Pro, Tab 2, and even the new Galaxy Note Edge and Note 4. Early last month, NVIDIA said the ITC had voted to open an investigation into whether those products should be blocked -- an encouraging step in the right direction for NVIDIA stockholders.

At issue now, however, are eight Samsung's patents, six of which it claims NVIDIA has violated. Velocity Micro, for its part, has allegedly violated all eight. 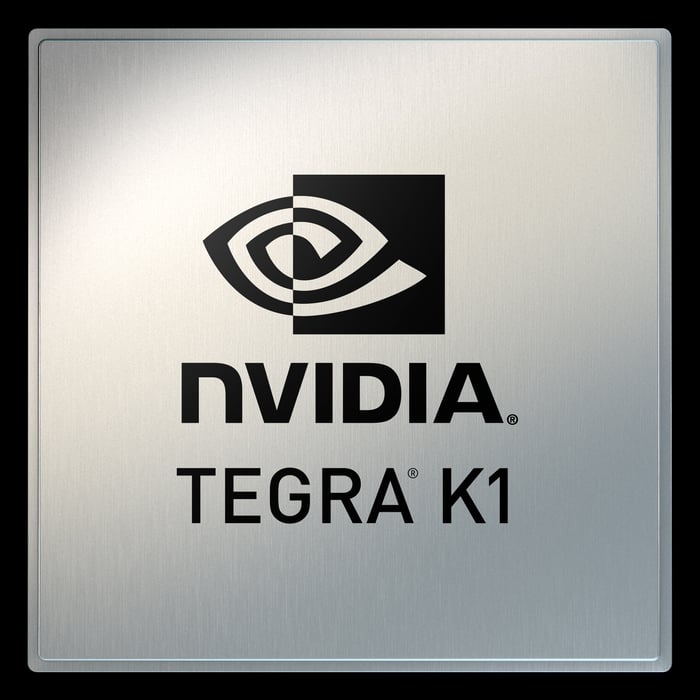 Samsung is disputing NVIDIA's claim that its K1 is the "world's fastest mobile processor." Credit: NVIDIA

In addition, Samsung filed a false advertising claim in response to NVIDIA's assertion that its SHIELD tablet has the "the world's fastest mobile processor." That processor, of course, is NVIDIA's Tegra K1 superchip, which has surprised even benchmark experts given its PC-class performance and console-class gaming abilities.

NVIDIA said "Samsung alleges that its Exynos 5433 processor [in the Galaxy Note 4] is faster on a couple benchmarks."

Worry not?
So should NVIDIA stock investors be worried?

First, it would be silly to completely ignore the possibility that Samsung's case might have at least some merit. I'm no patent expert, but you can bet NVIDIA is taking its new defendant status seriously.

At the same time, however, while NVIDIA isn't ready to publicly respond to Samsung's patent violation claims just yet, Shannon insisted the company could not "hold back on [the] false contention that Samsung's Galaxy Note 4 outperforms the SHIELD tablet."

To support its argument, NVIDIA offered the following slide showing 21 benchmarks run on both devices in their respective standard "out of the box" configurations. In 18 of those tests, NVIDIA's K1-powered SHIELD tablet comes out on top, and often by a stunningly wide margin: 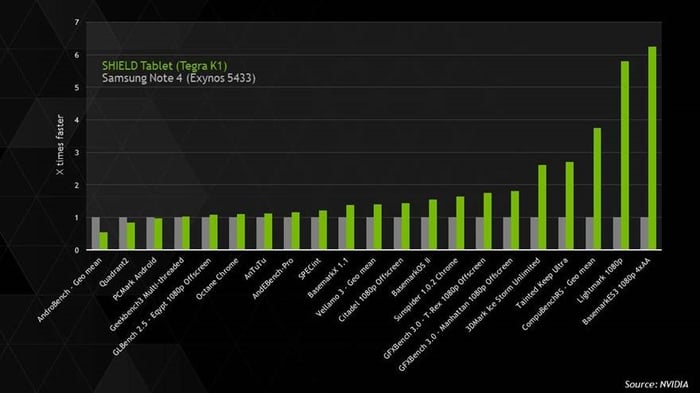 It's unfortunate that Samsung sued Velocity. This isn't Velocity's fight. But Samsung is just trying to keep its lawsuit in Virginia, which has a faster time to trial than most jurisdictions in the United States. It can be a dangerous strategy for one of the largest companies on the planet to decide to sue one of the smallest companies in all of Virginia.

But Samsung's new lawsuit still doesn't change NVIDIA's claims. And even though NVIDIA is technically 15 times smaller than Samsung in terms of market capitalization as of this writing ($10.6 billion compared to $162 billion, respectively), it does have the financial resources to back up those claims. For the quarter ended Oct. 26, 2014, NVIDIA's balance sheet boasted over $4.2 billion in cash and equivalents, with roughly $1.4 billion in long-term debt.

Finally, while this is NVIDIA's first-ever patent lawsuit, the company already knows a thing or two about licensing intellectual property. NVIDIA previously licensed a custom GPU core to Sony, for example, for its PlayStation 3 console. Meanwhile, $163 billion chip juggernaut Intel has paid NVIDIA $250 million per year since 2011 under a six-year, $1.5 billion agreement to license the smaller company's visual computing patents.

Even so, NVIDIA stock investors would still be wise to keep a close eye on how these cases progress. One way or the other, billions of dollars could hang in the balance.