When it comes to your home appliances and devices, there are few brands as recognizable as General Electric (NYSE:GE). GE pioneered the lightbulb way back in 1879, the toaster in 1905, and the first electric stove in 1910. And the GE brand remains a major player in the electrical appliance industry to this day.

After 130 years of innovation, it seems only fitting that GE would usher in the next wave of household technology. And the biggest buzzphrase in this category is what's become widely known as the "smart home."

Just as GE brought electricity to the devices of the 20th century, the advent of the smart home will bring data to the appliances of the 21st century. This, in theory, will make our households more efficient, thereby saving us time and money.

But GE is conspicuously withdrawing from this playing field. A closer look at GE's business shows the company has little skin in the game when it comes to smart homes and futuristic appliances. Perhaps it's a sign this market is a little overhyped altogether.

GE's appliance garage sale
For starters, the most blatant sign that General Electric is not terribly interested in smart homes is that it sold its GE Appliance business to Sweden's Electrolux back in September. In exchange for $3.3 billion, GE exited its iconic business while allowing the GE brand to live on under the guidance of one of its major overseas competitors.

Looking back, the spinoff happened quite swiftly once GE announced that it was shopping the business to interested parties. And the final price tag was a garage sale-like bargain: $3.3 billion amounted to roughly 7 to 7.3 times the appliance business' estimated 2014 earnings before interest, tax, depreciation, and amortization (EBITDA). For perspective, GE as a whole trades for 22.19 times EBITDA today.

Many shareholders and onlookers were rightfully miffed by the transaction. As my Foolish colleague Rich Smith pointed out at the time, it marked the end of a five-year ordeal in which shareholder value was erased by mismanagement in this division. And it left us guessing as to how GE planned to pitch the so-called "Internet of Things" to a consumer market going forward.

For years, we had heard about how GE was going to transform our not-so-intelligent homes into more efficient, responsive tools that would make our lives a little easier day to day.

Here's an example of what GE referred to as the "Net Zero Energy" home back in 2009, outfitted with all the bells, whistles, and sensors that you would expect from something straight out of Silicon Valley: 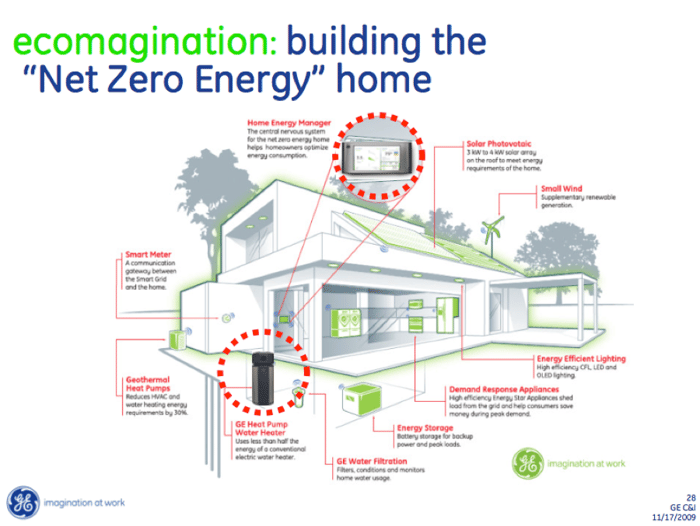 While it seems like a cool concept, there's little evidence that GE made much headway on this all-encompassing solution in more than five years of work. GE Appliance's revenue declined 18% from 2008 to 2013. And, as pointed out in a thorough analysis by website The Verge, "The Dumb State of the Smart Home," the smart home market remains as disjointed as ever due to the lack of a common Wi-Fi-like standard across devices.

Furthermore, even if we reached a tipping point that sparked greater user adoption, the profit margins could prove to be mediocre. GE Appliance would have had a long way to go to catch up with its overall business: the segment profit margins for appliances reached 3.9% and 4.6% in 2012 and 2013, respectively, a third less than the 15.1% and 15.7% margins generated by GE overall.

So, perhaps GE's CEO Jeff Immelt said enough was enough. In theory, this all sounds great, but just how many of your neighbors have adopted the much-hyped talking refrigerators of the future? Not too many, I'm guessing.

Who wants a smart home? Anyone? Anyone?
To be sure, GE hasn't abandoned the idea altogether, but it's hard to see it gaining any traction within the company's walls. Perhaps it could pick up steam through GE's alliance with Quirky, a more nimble upstart that aims to piece together a "smarter home with Quirky+GE's new suite of connected products."

Just last week, Quirky announced seven new products and a marketing campaign that attempts to disprove the idea that smart homes are either unaffordable or perhaps a little too invasive.

But only time will tell if Quirky can convince consumers it's worth installing software across their home. And the big challenge, of course, is that there are numerous other companies that also want a piece of the action, including everyone from GE's direct competitors like Honeywell to dominant home-monitoring companies like ADT to some of the biggest tech powerhouses in Cisco and Google.

And, with so many cooks in the kitchen, things could get a little messy. For instance, will consumers want a universal platform that can link one brand of appliance to another brand of thermostat? And, if so, what will that mean for a company's profit margins? Obviously, most players would prefer to provide the whole kit and kaboodle to pull users into their ecosystem. But that could slow the overall growth of the market considerably.

Right now, a research company known as Berg Insights estimates that the smart home market will grow to 36 million homes by 2017, up from 3.5 million at the end of 2012. Sales are estimated to reach $9.4 billion a year at that point.

While that's impressive growth, it's still chump change for a $146 billion company like GE. Even if GE garnered 20% of the market, that works out to a relatively small $1.88 billion in additional sales over the next few years.

What's next for GE's "Industrial Internet"?
Perhaps the most convincing argument that favors GE focusing its attention away from the consumer market and toward the industrial space is revealed in a statistic from a 2010 presentation given by the company.

Back then, GE's director of research and development at GE Appliances, Natarajan Venkatakrishnan, pointed out to CNET.com that roughly 250,000 homes running electric dryers equals electricity use of 600 megawatts, or the equivalent energy of one coal plant.

So, GE can either plow its time and money into convincing a quarter of a million consumers to adopt a technology that will shave incremental amounts off their energy bill, or it can convince one utility company to leverage the power of the "industrial Internet" on one power plant. With over 557 U.S. coal-powered plants and nearly 3,000 natural gas and petroleum plants according to the EIA, where would you put your resources?

Yes, the home of the future could be interesting, but GE's got bigger fish to fry for now.