The twists and turns in offshore drilling continued last week. This time the industry took a disappointing turn as news surfaced that Statoil (NYSE:EQNR) was canceling a rig contract dedicated to offshore drilling in Angola after its efforts came up dry. In so doing it joined ConocoPhillips (NYSE:COP) with an offshore drilling flop in the deep waters off the coast of Angola.

Statoil announced last week that it would take a $350 million charge to cancel a rig contract two years early. The rig had been assigned to drill offshore wells in Angola, but the results of the first wells were not promising enough to cause the company to continue to invest at this time. Originally, Statoil signed a three-year $700 million contract to drill a number of wells to explore blocks 38 and 39 of the Kwanza basin offshore Angola. However, the company has now called that contract "onerous" as it is now being forced to take a charge to terminate it early. Further, the company's well in block 38 has now been plugged and abandoned, which will be expensed in the fourth quarter.

That being said, the company still does see some prospectively for the basin. So, it's not giving up entirely, but taking a timeout on the exploration program instead. What Statoil has decided is that it would rather take the loss now than incur more costs in the future by continuing to explore the associated exploration blocks until it has more data. Instead, the company will turn its attention to more promising areas while it considers its next steps in these exploration blocks.

Statoil isn't the only one coming up dry in Angola. A few weeks ago ConocoPhillips (NYSE:COP) announced that its offshore drilling program in Angola drilled a dry hole. The company's Kamox-1 exploration well didn't encounter the commercial hydrocarbons it expected to see so the company chose to plug and abandon the well. That resulted in a $140 after-tax impairment charge for the company.

What's worth noting is that ConocoPhillips' dry hole was drilled in block 36, which can be seen on the following slide. 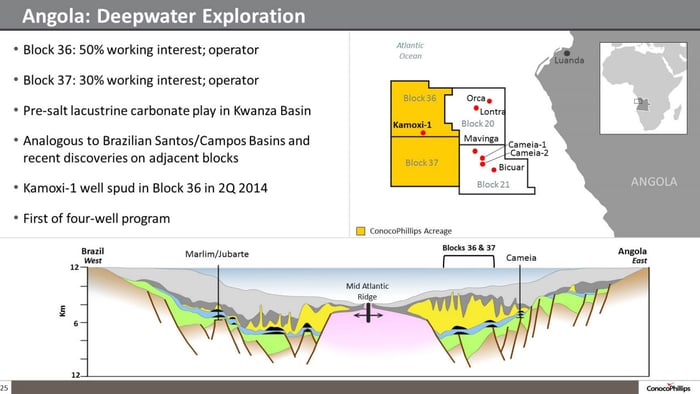 The company's next well is in block 37, which isn't looking very promising at the moment given the fact that Statoil just gave up on a well in block 38. However, as that slide notes oil companies have made oil discoveries in the region, and still view it as promising given the fact that these pre-salt plays appear to be analogous to Brazil's Santos and Campos Basins. So, it's still possible that a major oil discovery will be made in the basin.

Offshore drilling can be a risky business as oil companies don't always find oil. That's recently been the case in Angola as both Statoil and ConocoPhillips have come up dry in exploration attempts. Still, the potential remains for large discoveries, which is why oil companies will continue to turn to offshore drilling in search for a big oil find.