Warren Buffett of Berkshire Hathaway (NYSE:BRK.A)(NYSE:BRK.B) is one of the greatest investors of all time, but he has certainly made mistakes along the way. Our analysts thought these three were among his biggest.

Patrick Morris: Like all of us, Warren Buffett has made mistakes. And he has honestly admitted to his biggest.

When discussing the investments Berkshire Hathaway held in the 2003 Letter to Shareholders, Buffett noted:

We are neither enthusiastic nor negative about the portfolio we hold. We own pieces of excellent businesses...but their current prices reflect their excellence. The unpleasant corollary to this conclusion is that I made a big mistake in not selling several of our larger holdings during The Great Bubble. If these stocks are fully priced now, you may wonder what I was thinking four years ago when their intrinsic value was lower and their prices far higher. So do I.

As the stock market ran up during "The Great Bubble," Berkshire saw its investment portfolio climb to a total value of $41.6 billion in June of 1998. At the end of 2002, it was still languishing, valued at just $28.4 billion: 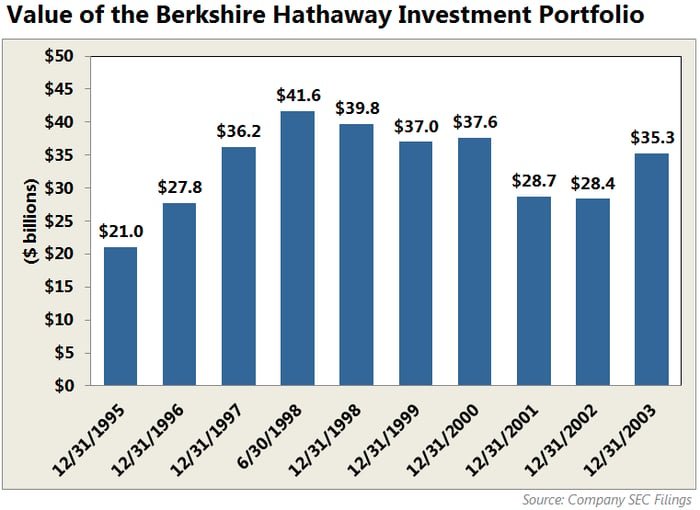 Even more striking is the fact that the total return -- when considering the cost of the investments -- was essentially cut in half, falling from 400% in the middle of 1998 to 210% at the end of 2002.

And while Buffett recently admitted he would never sell his stake in Coca-Cola (NYSE:KO), it is the prime example in the Berkshire portfolio of both rises and falls in value during The Great Bubble. Berkshire never bought or sold a single share of the company during this time, but as you can see, despite the number of shares owned never wavering, its value certainly changed: 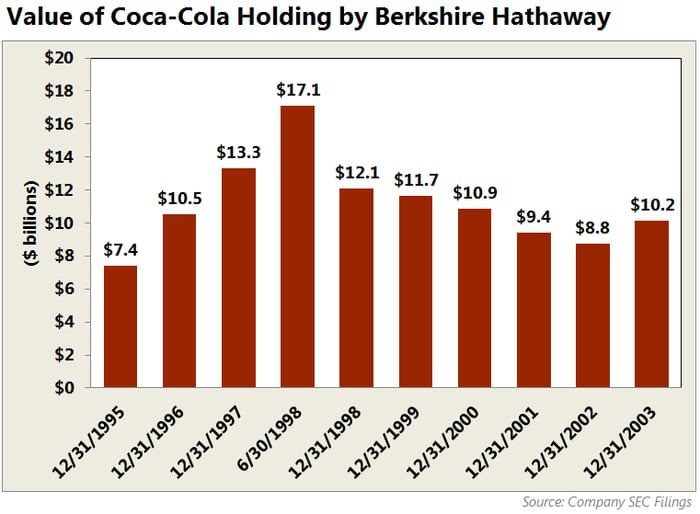 Interestingly enough, the end of September 2014 marked the first time Berkshire's stake in Coca-Cola surpassed where it stood in June of 1998. You have to imagine Buffett wishes that 15 years ago he didn't have an insistence on never selling a single of of the 400 million Coca-Cola shares Berkshire holds.

Timing the market is a tremendously dangerous game and never recommended. And hopefully we will never see anything like The Great Bubble for decades and decades to come. But in the case of Buffett and Berkshire, it turns out not selling during one of those bubbles can present just as big of a risk as buying.

Buffett invested in IBM because he was impressed by CEO Sam Palmisano's plan for doubling annual earnings per share from $10.01 in 2009 to $20 by 2015. But when Palmisano made that bold promise, IBM should have been acquiring more companies to revive its stagnant top line. Instead, IBM continued to shrink as it shed its lower margin businesses to protect its bottom line. Palmisano's successor, Ginni Rometty, finally acquired cloud computing company SoftLayer Technologies for $2 billion last year, then invested $1.2 billion in a new business unit for its AI platform Watson in January.

Jordan Wathen: Buffett points out that he's made more errors of omission than commission. That is, he's missed more great companies than he's bought bad companies.

Perhaps the worst error of omission was Wal-Mart (NYSE:WMT). Buffett was buying big during the 1990s. He set out with the goal of buying the equivalent of 200 million shares, then trading at a split-adjusted price of $11.50 each. As he was buying, the price moved just pennies over his ideal price of $11.50 per split-adjusted share. He stopped buying.
As a result, he missed out on a share price move that would cost Berkshire Hathaway billions of dollars in lost opportunity. He valued the lost gains at more than $10 billion in 2004, which would be many billions more today. For the record, Wal-Mart shares now trade at about $85 each, and that doesn't even begin to include dividends paid over time.
Even Buffett, probably the best person in the world at valuing businesses, gets a little too attached to his ideal prices every once in awhile. And while the loss won't appear on the income statement at Berkshire Hathaway, it may be one of the biggest mistakes in his investing career.