Raise your hand if you expected to see this chart for America's crude oil benchmark West Texas Intermediate, or WTI, in 2014. 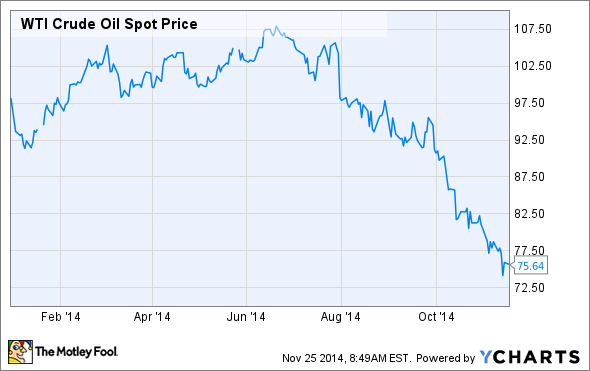 Don't feel bad if your hand isn't up. It's virtually impossible to accurately predict where oil prices will go next. The best we can do is consider the range that oil prices are likely to trade in as opposed to nailing down a particular price.

This is exactly what the U.S. Energy Information Agency does when it makes its short-term energy outlook. At the end of 2013 its 2014 oil price forecast for WTI was officially $95 per barrel, however, it estimated that there was the potential for oil to trade between $115 on the high end and $66 on the low end. Looking ahead to 2015 it sees a similarly wide range, which can be seen in the following chart. 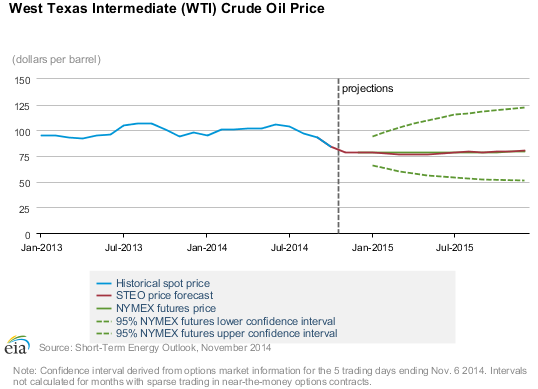 While the forecast suggests that oil prices should average $77.75 per barrel in 2015, it notes that oil prices could hit $50 on the low end and upwards of $125 on the high end. That's a pretty wide range, so let's take a closer look at what could push oil to each extreme.

Here's why oil prices in 2015 could be lower than forecast

I (Tyler here) still get this icky feeling when I start making calls about where oil prices will go. So instead of saying they will go down, here is the primary factor that investors should be aware of that could send domestic oil prices lower.

Since we're only dealing with domestic oil production, you have to consider the ban on oil exports in the U.S. Sure, a couple companies have found ways to skirt around it, but for the most part it still does its job of keeping domestically produced oil on U.S. soil. This ban sounds good on paper, it makes much less sense economically. U.S. oil refiners can process only so much of the type of crude that is produced domestically, and the imports that type of crude is replacing -- light crude -- are getting smaller by the day. 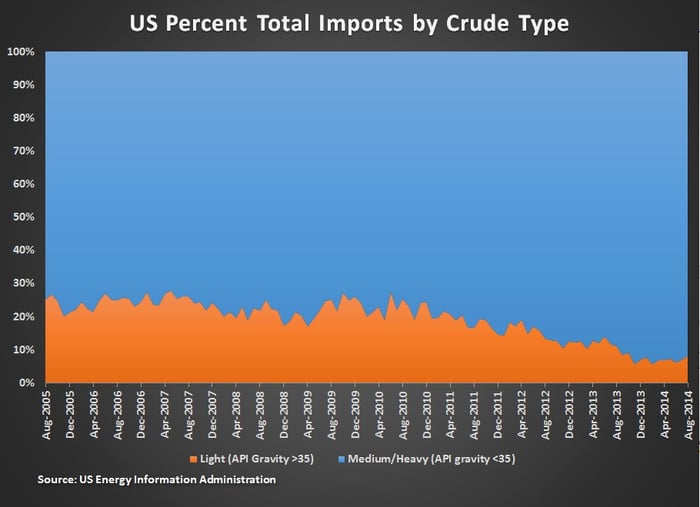 Eventually, something has to give here. The options are that the oil export ban is lifted, refineries reconfigure their operations to run more light crude, or supplies of domestic light sweet crude start to overwhelm our refining capacity and the bottleneck causes a drop in price.

Producers would eventually compensate, and by that I mean the ones who need higher oil prices will get pushed out and production will slip. It's the natural cycle of oil and all other commodities. However, that might take longer than a one year time horizon like we're talking about here.

Here's why oil prices in 2015 could be higher than forecast

Like Tyler, I'm (Matt here) not one for making forecasts, especially when it comes to something as unpredictable as oil prices. While its price is largely a function of supply and demand, its volatility is due to an over-reactive fear of a disruption in either supply or demand. We saw that over the last few months of 2014 oil prices tumbled as tepid demand for oil in Asia drove worries that demand would only grow weaker.

However, lower oil prices tend to spur demand for oil, so, the fact that oil is now lower suggests that we could see demand for oil pick up. Current estimates note that the plunge in crude oil has the potential to act as a trillion dollar economic stimulus around the globe. While it will take some time for that stimulus to work its way through the economy, it's quite possible that oil prices will react to a perceived pickup in demand for oil well before that demand actually begins to show up in the numbers. So, if Americans start driving more, or noticeably shift car buying habits from hybrids to SUVs, it might be all that's needed to drive oil prices higher in 2015.

Our takeaway on oil prices in 2015

Both of these cases are based on the trends happening today, and there are always things we don't see coming that could make both cases irrelevant even a couple days from now. That's the danger of trying to predict the price of oil and making speculative bets based on those predictions.

That being said, there are other valuable investing takeaways you can use from looking at these trends. For example, someone looking long term should take note of the wide array of options that U.S. refiners have today with domestic supplies and imports fighting on price, or we can look at the simple fact that lower oil prices tend to stimulate the demand for more oil and look for beaten down oil stocks to buy. Either way, 2014 was full of surprises that have slightly altered the way we think about investing in oil, and we're pretty certain that 2015 will do the same.

Oil Prices 2015: What to Expect @themotleyfool #stocks Next Article
Current