Advanced Micro Devices (NASDAQ:AMD) hosted an event several months ago discussing its future processor plans. In particular, it mentioned that it was planning to launch a duo of products under the codename "Project Skybridge." These products would be built on a 20-nanometer manufacturing technology and come in both X86 and ARM (NASDAQ:ARMH) variants. They would be launched, according to AMD, "starting in 2015."

However, AMD just announced its 2015 APU lineup consisting of two products: Carrizo and Carrizo-L, aimed at the mobile PC market. These are updated designs, but, according to AMD's official product roadmap, they are still built on a 28-nanometer manufacturing process. AMD's latest roadmap also shows that it intends the 28-nanometer Mullins chip for tablets/convertible PCs. 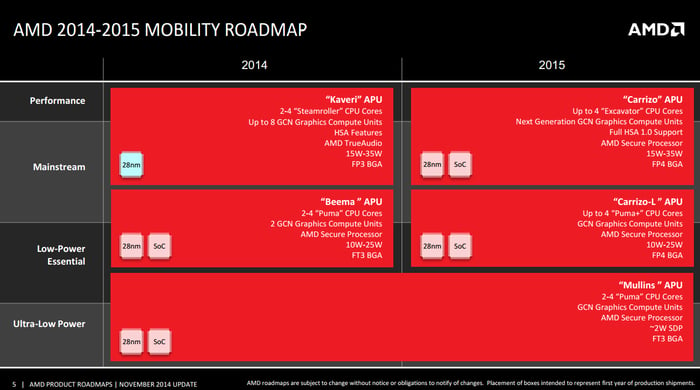 The simple question, then, is when exactly does AMD plan to launch its Project SkyBridge family of chips?

Take a look at the slide below from the same deck that the above roadmap came from. AMD is still claiming that Project SkyBridge will come in 2015: 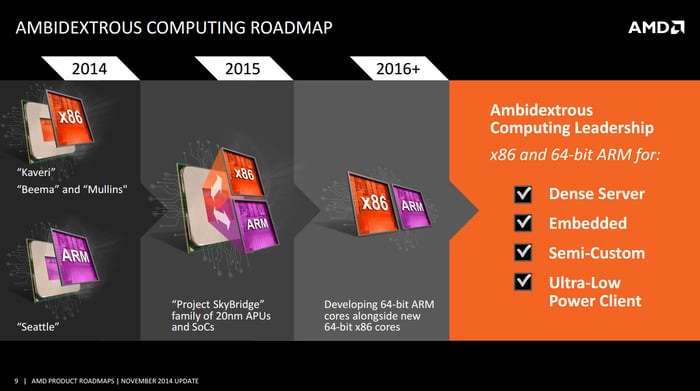 So, if one slide says that AMD's SkyBridge is on track for 2015, but the company's client roadmap shows only 28-nanometer Carrizo/Carrizo-L/Mullins for 2015, there's a serious disconnect here. What exactly is going on? How should investors think about this?

My best guess is that AMD will announce the Project Skybridge APUs at some point in late 2015, but devices using those chips probably won't make it to market until early to mid-2016. This seems to be the most obvious way to reconcile the two slides presented above.

Now, if this turns out to the case, then there are some pretty serious implications on the company's competitive positioning in the PC market worth exploring.

The competitive implications explored
AMD's higher-end Carrizo processor (no "L") will face off against Intel's (NASDAQ:INTC) 14-nanometer Broadwell family of notebook processors, the latter of which are slated to launch, according to Intel's Kirk Skaugen, in "early spring" of 2015. At this point, AMD's higher-end notebook parts will be two manufacturing technology generations behind what Intel will offer in roughly the same time frame.

Interestingly enough, though, it does appear that Carrizo-L will launch in the first half of 2015, while Intel will launch its low-cost 14-nanometer Braswell product for PCs at some point in the second half of 2015 -- CPU-World claims an early Q3 launch -- giving AMD a bit of a head start.

I expect, though, that once Braswell hits the market, AMD's Carrizo-L will struggle.

Hard to be optimistic about AMD's PC chances in 2015
It remains difficult to be optimistic about AMD's chances in the PC market. The manufacturing gap between Intel and AMD seems to be widening in Intel's favor, and Intel's lower-power, low-cost architectures continue to improve dramatically with each generation. Although anything could happen during the next year, I continue to expect that AMD will have a tough time maintaining its current PC market share, let alone gaining share in the near-to-medium term.