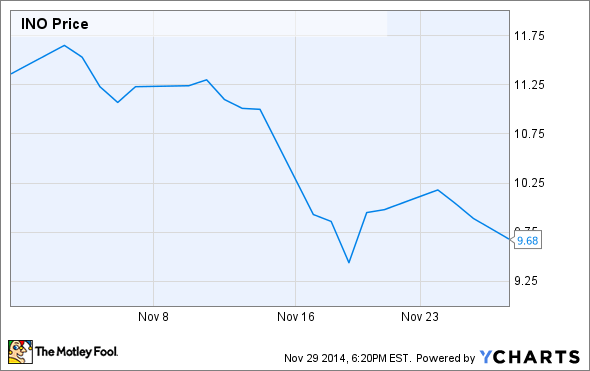 What: Shares of Inovio Pharmaceuticals (NASDAQ:INO), a clinical-stage biopharmaceutical company focused on developing synthetic vaccines to treat cancer as well as various types of infectious diseases, plunged 15% in November, based on data from S&P Capital IQ, following an update to its collaboration agreement with Roche (OTC:RHHBY) and the reporting of its third-quarter earnings results.

So what: Without question the majority of the negativity directed at Inovio last month derived from its mid-November announcement that Roche had ended its licensing agreement with Inovio in regards to prostate cancer hopeful INO-5150. This means all licensing rights for INO-5150 are returned to Inovio, but it also means a good chunk of the $412.5 million in milestone and regulatory revenue that it could have earned in its two-drug pact with Roche is also gone. To be clear, however, Roche and Inovio are still collaborating on hepatitis B vaccine INO-1800. A phase 1/2a study of INO-1800 is expected to be launched in early 2015. The other negative component was Inovio's third-quarter earnings report. In Q3 Inovio delivered just $1.8 million in total revenue and produced a net loss of $7.2 million, or $0.12 per share. The net loss was actually much smaller than the year-ago period loss of $50.6 million, but its Q3 2013 loss was primarily as a result of a change in value of warrants rather than poor operating results. The clear concern here is that ongoing losses could eat through Inovio's remaining cash, which the company believes should last it through 2017.

Now what: The end of the Roche pact concerning Inovio's prostate cancer vaccine is definitely disappointing, if not for the loss of possible milestone revenue then certainly for the lack of having an astute cancer marketing partner. The good news is Roche is standing by Inovio with INO-1800 -- but who's to say Roche won't walk away if the early stage data isn't to its liking?

Inovio has a very diversified pipeline with nearly one dozen compounds under review. It's also focused on a field that's garnering a lot of interest at the moment, immunotherapies, which focus on enhancing the body's immune system to attack a disease rather than trying to create a medicine designed to attack a disease directly. These factors should help provide some support to Inovio's share price.

Conversely, it could be many, many years before Inovio shareholders see any chance of this company being profitable. Inovio is going to need strong phase 3 results from VGX-3100, its most advanced vaccine, if it's to prove to Wall Street that it deserves its current valuation. Unfortunately, VGX-3100 isn't on pace to begin its phase 3 enrollment until early 2016. With few really meaty catalysts on the horizon, investors' best bet might be to wait this one out on the sidelines.