Tesla Motors' (NASDAQ:TSLA) stock fell about 8% this week. This bad week adds to some tough months for the stock, which is now about 22% off its all-time high of $291.42 in September. What's to blame for the sell-off? While the negative catalyst isn't 100% clear, here are two potential sources for the stock's weaker outlook.

BMW-Tesla drama
The media devours every word that comes out of Tesla CEO Elon Musk's mouth. And given Tesla stock's very forward-looking valuation, this can have quite a whipsaw effect on the share price. A few comments from Musk recently seemed to spark some drama.

"We are talking about whether we can collaborate in battery technology or charging stations," Musk said of Tesla and BMW (OTC:BMWYY) in an interview last month with German weekly Der Spiegel. Furthermore, Musk described BMW's carbon-reinforced car body parts as "interesting" and "relatively cost efficient."

Bold headlines subsequently suggested informal talks between Tesla and BMW signaled a potential deal was nearly in the bag. Some media outlets even made new connections that Musk had not raised in the interview, assuming Tesla was also in talks with BMW to use carbon fiber in future vehicles.

When BMW late last month told German business news magazine Wirtschafts Woche that the two companies were not collaborating, and made Musk out to be a manipulator who was "using us for PR purposes," the Street didn't take well to the news. Tesla shares dropped in the following trading days.

Topping off the story at the end of this week, Musk set the record straight with Wirtschafts Woche: "We had informal talks about many things, but at no point in time [have] we said that there will be a cooperation."

Profit-taking
Investors might also simply be continuing to take profits after a nice run for Tesla stock. Even following the recent sell-off, shares are up about 60% this year, handily outperforming the S&P 500's 16.25% gain. Zooming out further, the stock has spiked a whopping 560% in the past two years. 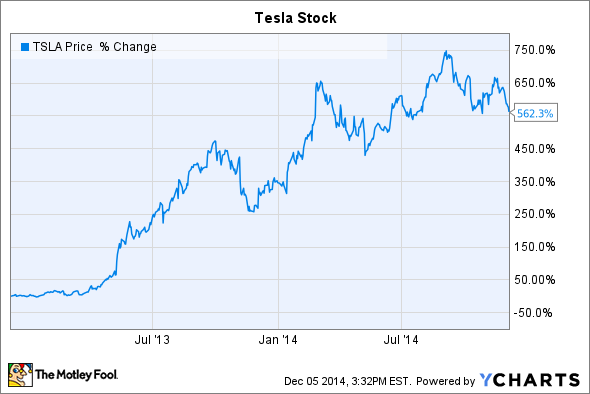 As shares now slide lower, some investors might be considering adding to their position or buying their first shares of Tesla. But there is nothing wrong with hoping for an even larger sell-off from here. Sure, if this turns out to be the bottom for Tesla stock, then patient investors who waited for a lower share price could miss out. But if the stock does continue lower, investors could get in at an even less risky price.

In September, I cited $215 as a decent price at which to buy Tesla stock. Even if shares reach this level, though, there is still considerable risk in the stock given that the valuation is so dependent on future growth. At the same time, it's companies with game-changing leaders like Elon Musk that deserve a considerable premium.