In 2008, Russian tanks crossed their southern border, invading and crushing the military forces of the tiny Republic of Georgia. Georgia's U.S. and European allies raised feeble objections to Russia's incursion -- but little more.

In fact, just two years after Russia's "short, victorious war" in Georgia, French defense contractor DCNS happily announced the signing of a $1.7 billion contract to sell the Russian Navy a pair of 16,500-ton Mistral-class amphibious warfare ships. Capable of putting ashore an assault force of up to 40 tanks or 900 assault troops -- and carrying as many as 16 combat helicopters -- these ambidextrous aircraft carriers offered Russia's military an unprecedented ability to threaten nearby littoral nations. But then, Russia invaded a second sovereign country.

And this was the straw that broke the Mistral's back. 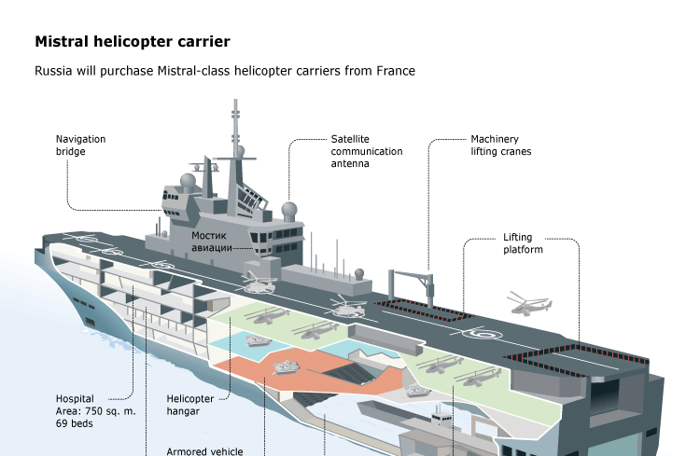 So long, Mistral. We hardly sold thee
The first of France's Mistrals, tentatively named the "Vladivostok," was scheduled to be delivered to Russia on Nov. 14. Under pressure from allies, however, French President Francois Hollande announced last week that he is "suspending" its delivery.

As Hollande's office explained in a statement: "The president of the republic considers the present situation in east Ukraine still does not allow the delivery" of the Mistral. Which makes sense -- not giving Russia weapons at the same time when it's using those weapons to attack its neighbors.

This does, however, pose a problem for DCNS, one of France's biggest defense contractors. Russian state news outlet TASS reports that Russia may sue France for breach of contract if it fails to deliver the warships -- demanding as much as $3.7 billion in damages. And even if the lawyers don't get it, DCNS still stands to lose the $1.7 billion purchase price.

Or not
One possibility that's been mooted to ease DCNS' pain is that NATO could buy France's Mistrals. After all, Europe hasn't been spending anywhere near the 2%-of-GDP goal that NATO sets for defense spending among its members. They could certainly use the extra armament.

Others have suggested that the Mistral's size -- about half that of an American America-class warship, or equivalent in size to Japan's fleet of so-called helicopter destroyers -- and its low price -- roughly one-quarter that of these vessels -- might fit well within the U.S. Navy as a sort of mini-aircraft carrier.

America's mini-aircraft carrier, the USS America (LHA-6), is twice the size of France's Mistral -- but at $3.4 billion each, costs almost four times as much. Source: U.S. Navy.

A third option recently surfaced, however, in the pages of Canada's National Post. Canada, which is currently in the midst of a $50 billion project to rebuild and expand its navy, could buy the Mistrals as part of that effort.

A match made in Paris
In fact, this might make the most sense of all. After all, France and Quebec already speak the same language -- Canada wouldn't even have to change the stenciling on the control panels.

On the other hand, this would be bad news for American defense contractors such as General Dynamics (NYSE:GD), Seaspan (NYSE:ATCO), and Lockheed Martin (NYSE:LMT), which have been lining up to bid on Canada's naval work. Even with $50 billion up for grabs, they won't relish sharing the loot. And if Canada finds it likes the first Mistral, and wants to buy more of them? That would be even worse news for us.

Will it happen? Stay tuned.