At the Intel (NASDAQ:INTC) investor meeting this year, the company disclosed that it would be launching its low-power Broadwell processors in "early spring." Interestingly enough, Kirk Skaugen, who heads up Intel's PC Client Group, showed the following product roadmap for the company's PC-oriented processors: 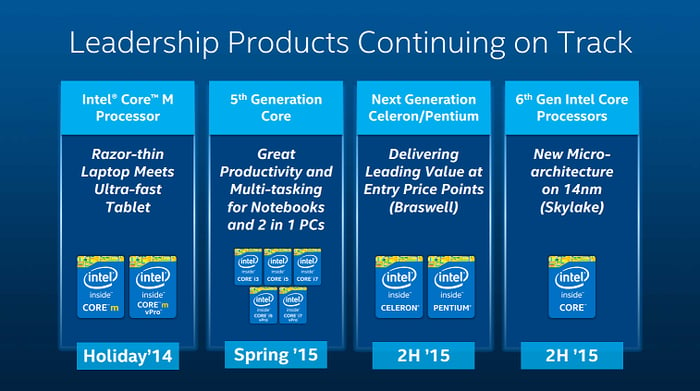 Additionally, during the Q&A session following the presentation, Skaugen had the following to say:

What we also said is that we're shipping millions of units in preparation for a very early spring fifth-generation Core launch of our traditional Celeron, Pentium, Core i3, i5, i7 which will be on Broadwell-U.

So, if Intel is launching Broadwell-U (the the 15-watt and 28-watt laptop processor models) in the spring, and if it plans to launch Skylake in the second half of 2015, then what does that say for the higher-powered quad-core variants of Broadwell (i.e. Broadwell-H and Broadwell-M)?

Digging a little deeper into the Q&A

During the question-and-answer session, an analyst posed the following question:

My question is about Skylake. When you had this kind-of later-than-seasonal ramp of Broadwell, is Skylake going to be a back-to-school type of launch, and does that mean you have a shortened life for Broadwell?

Skaugen's answer to this one was very interesting:

We haven't publicly disclosed the ordering of our products, but what I can tell you is we'll have a very robust desktop ramp and a very robust mobile ramp for notebooks and 2-in-1s [emphasis mine], so we're expecting to have both of those products ramping significantly in the second half of the year. As it sits today -- and things can change -- it'll be a cleaner and more rapid ramp than what you've seen with Broadwell this year. We have more headroom in the schedule to have a complete holiday kind of situation.

Given that Skaugen pointed explicitly to a Broadwell-U launch in the spring of 2014, and expects both desktop and mobile Skylake products to ramp during the second half of 2015, where does Broadwell-H -- the higher-performance quad core notebook CPU family based on the Broadwell core -- fit in here?

Did Intel just axe Broadwell-H?
According to a leak from VR-Zone a while back, Intel planned to launch the Broadwell-H series of chips at some point between "work week 29" and "work week 36" in 2015. Based on this 2013 Intel work-week calendar, this would imply a launch at some point in late July to early September.

If Intel plans to ramp Skylake during the second half of 2015, and if the ramp is as robust as Skaugen claims, then does Intel even plan to launch the higher-performance and higher-power Broadwell chips?

I wouldn't be surprised if Intel skipped straight to Skylake for the higher-performance notebook models. Skylake is likely to bring a significantly improved CPU core over Broadwell and also a brand new graphics and media subsystem that looks superior to the one that comes with Broadwell. It will also feature a higher graphics tier (GT4e), which should be attractive to Apple (NASDAQ:AAPL) for a late-2015 15-inch Retina MacBook Pro.

If Intel really skips to Skylake, then tick-tock could be back
Perhaps the most encouraging part of a potential axing of these Broadwell parts in favor of Skylake is that it could signal a return to the "tick-tock" cadence for Intel. Skylake fully ramped in the second half of 2015 means that Intel could conceivably mean that the 10-nanometer Cannonlake product will be on-time for a broad deployment for back-to-school in 2016.