If history is any indication, GE will promise investors more cash next week.

The market has shrugged at General Electric's ( GE 1.60% ) accomplishments so far in 2014: The manufacturer's shares are down 7% even as it has posted three strong quarters of financial performance, negotiated a savvy blockbuster acquisition, and executed a well-timed banking spinoff.

What GE needs is for a December like last year's, when the stock gained more than 5% in a matter of weeks. What it needs is something a little more tangible than momentum -- something like a boost to its cash dividend, perhaps.

If that's what investors are clamoring for, well, there's good reason to believe a dividend hike could be just around the corner. Here's why.

A February to forget
If you have been a GE investor for less than five years, you might understandably be confused by this year's disconnect between GE's results and its stock price. Since December 2009, the company has increased earnings per share by 30%, while shares have risen 63%. Meanwhile, its dividend payout has jumped 44%.

But the formula has not always been that simple. Reaching back to 2008, we see there's good reason a wide swath of long-term shareholders might be hesitant to reward GE's progress too quickly.

Heading into the financial crisis, GE's earnings and dividends had grown at an average annual rate of 10% for a decade. All signs pointed to a healthy, steadily expanding company, and yet the bottom was about to fall out from under this blue chip stock.

By 2009, the market had lost its confidence in the entire banking sector, and GE was lumped in here due to its derivative-heavy financing operation. Simultaneously, a lack of investor confidence and the conglomerate's own cash flow concerns led to the unthinkable: GE cut its dividend. The fallout in February of that year was severe, as shown below: 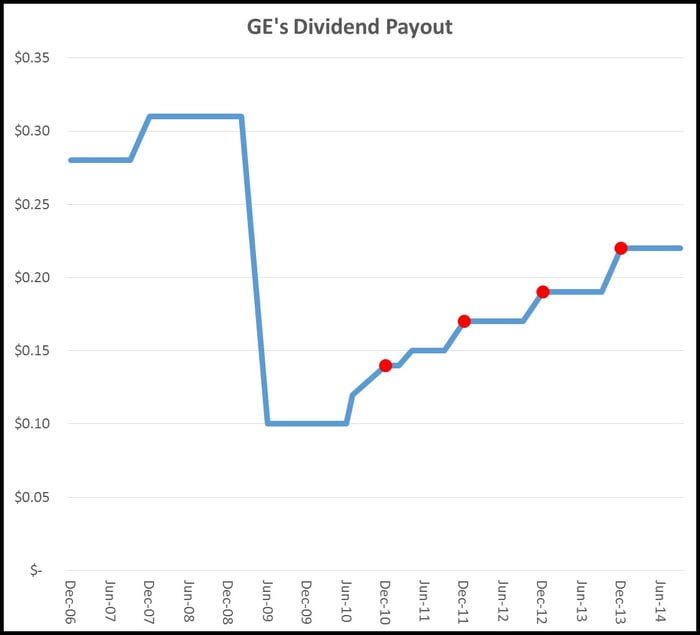 This perspective is important to keep in mind for investors who are uninspired by GE's year-to-date performance. Its dividend cut provided a rude awakening for loyal stockholders. Such an event had not occurred in 71 years, going all the way back to the Great Depression.

Since slashing the payout, the company has faced a long, slow march to regain the market's confidence. And a number of GE followers -- including myself -- believe some over-the-top pessimism persists to this day.

Why do I bring this up? Why revisit a day we'd rather bury forever? Because if February 2009 is a month to forget, December 2014 could be a month to remember for GE shareholders. Or at least the writing is on the wall for a positive announcement.

A December to remember
If you take a second look at the chart above, you'll see the red markers coincide with an important period in each of the last four years for GE: the month of December. These are the months in which the company "declared" a dividend increase, illustrated by the uptick in the line graph.

As you can see, GE has not completely climbed out of the proverbial ditch, but it has made steady gains in the right direction. For four straight years, GE's annual investor meeting has given management an opportunity to reflect on and speak to the progress made in rewarding shareholders with cash.

First, a dividend boost signals healthy cash flow, and that GE's dividend payout ratio -- which grew to 82% in 2009 -- is at a much more comfortable 59% of earnings today.

Second, GE is taking small, incremental steps to show this is a sustainable practice. Management has made it clear in the annual report that it understands how important the dividend is to investors, so keeping it stable and reliable is critical.

Third, GE doesn't just plan to follow the herd; it wants to stand out. So the company has maintained a dividend yield that is much higher than that of its competitors. According to Dividend.com, GE's current 3.38% yield is roughly 50% bigger than the 2.25% average yield for conglomerate companies. And GE's yield is now 82% higher than the overall S&P 500's, a trend that has stuck for quite some time: 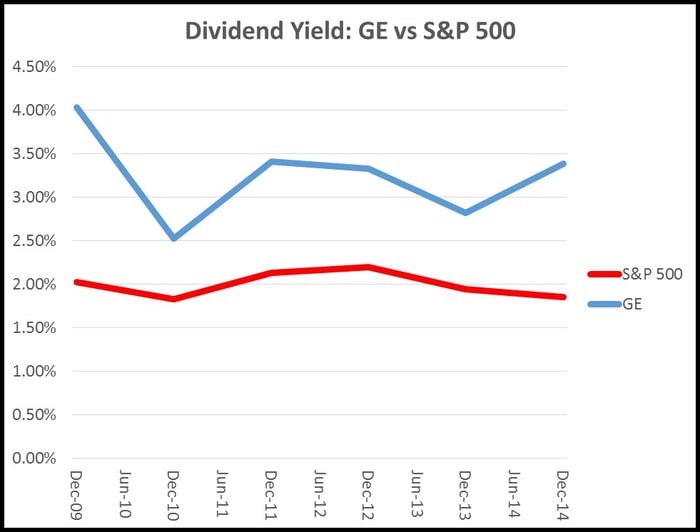 GE's annual investor meeting is slated for next Tuesday, Dec. 16, and there's a good possibility the company will take the opportunity to raise its payout per share once again. The earnings trend is favorable, given that the company expects its industrial profit to increase by at least 10% year over year for 2014. We'll find out soon enough. As a GE shareholder, I'll be watching the company's presentation intently on Tuesday, so be sure to check back for a full rundown at Fool.com.