It's no secret that dividend growth stocks have proven to be the best kind of stock to own over the long-term. Numerous studies also prove that high-quality small cap stocks outperform larger companies. Finally, undervalued companies have long been the hall mark of some of history's greatest investors, such as Benjamin Graham, David Dodd, and Warren Buffett.

What if I told you there was an unknown company that qualified as all three of these? An undervalued, almost unknown small-cap industrial company with a stellar dividend track record, strong growth prospects, high insider ownership, and a rock-solid balance sheet? This is a company that has, over the past 21 years, not only crushed its larger peers, but delivered annual total returns more than double that of the market. 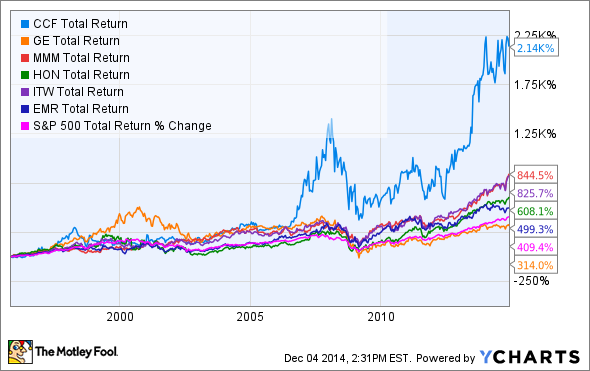 Yet Chase Corp (NYSEMKT:CCF), virtually unknown with no analysts following it, is likely to continue its decades-long shareholder wealth creation winning streak thanks to five simple reasons. Find out why this industrial hidden gem deserves to be on your radar, and possibly in your portfolio.

Chase Corp: What it does
Chase Corp is a $316 million, 68-year-old diversified industrial manufacturer that primarily focuses on two segments: industrial and construction materials.

Its industrial segment consists of several brands, including:

The largest growth possibilities, however, are in Chase's construction segment:

Chase's construction segment is important because of two major economic trends likely to serve as strong growth catalysts for decades to come.

Major economic trends fueling future growth
According to analyst firm IHS, within the next 11 years, $890 billion will be invested into the U.S. oil and gas industry.

That will mean immense growth in demand for Chase's casing fillers and pipeline sealing and protective tapes. For example, according to a study by ICF International, by 2035, $640 billion in additional midstream infrastructure--which includes pipelines, processing, and storage facilities--will be needed to service America's historical energy boom.

As this infrastructure is built, ages, and breaks down, Chase's pipeline sealers and tapes will likely see strong demand growth.

Coming infrastructure boom is badly needed
Another major growth catalyst for Chase is America's large and largely failing bridge, highway, energy, and waste water infrastructure. The American Society of Civil Engineers graded America's infrastructure a D+ in 2013 and stated that $3.6 trillion of investment would be needed by 2020 to improve it.

Specifically, the latest report from the ASCE cited the following concerns.

Competitive advantages
Anytime you are considering investing in a small company, one of your main concerns should be the security of the balance sheet. Since small companies have less access to capital markets, too much debt can mean death for a small cap's dividend, or even the company itself, should economic conditions turn sour or credit markets freeze up as they did during the financial crisis.

Luckily for Chase Corp, its balance sheet is rock-solid and even superior to many of its larger competitors.

Chase's debt-to-EBITDA or debt-to-earnings before interest, taxes, depreciation, and amortization, ratio is 74% lower than the industry average of 4.28, and below all of its major competitors save for 3M.

Finally, liquidity ratios like the current and quick ratio are an important tool for seeing how sound a company's balance sheet is in the short-term. The current ratio measures current assets/current liabilities while the quick ratio measures liquid assets/current liabilities. This simply refers to a company's ability to pay its short-term obligations such as debts and money it owes other companies with existing cash, inventory, or assets that can quickly be turned into cash.

As the table shows, Chase Corp's liquidity ratios are stellar, indicating a very conservative management team that is able to grow the company at quick but responsible rate by avoiding over leveraging with debt.

Quality management that eats its own cooking
High insider ownership is a great way to ensure management's interests are aligned with shareholders. Whereas most of its larger competitors have very little insider ownership (Illinois Tool Works and Emerson Electric at 1% each, Honeywell, GE, and 3M close to 0%), Chase Corp's management team owns 26% of the company.

In addition to owning a large portion of the company that their family founded, Chase's management has proven itself to be adept at generating strong long-term investor wealth through great returns.

Not only are all of Chase's key profitability metrics significantly better than the industry average, but its return on equity, the ability to generate profits from cash provided by shareholders, as well as its ability to convert sales to free cash flow, compares favorably with its largest competitors.

Superb dividend growth
Free cash flow, or FCF, which is the amount of cash coming into the company once all expenses, taxes, and growth investments have been paid for, is an important metric to watch, and Chase has been able to triple its free cash flow in just the past five years alone, a 24.6% annualized growth rate.

That helps not only ensure the safety of the current dividend, which accounts for just 23.3% of Chase's FCF, but is also what has helped Chase be one of the strongest dividend growers in its industry, including a 33.3% dividend hike in 2014. 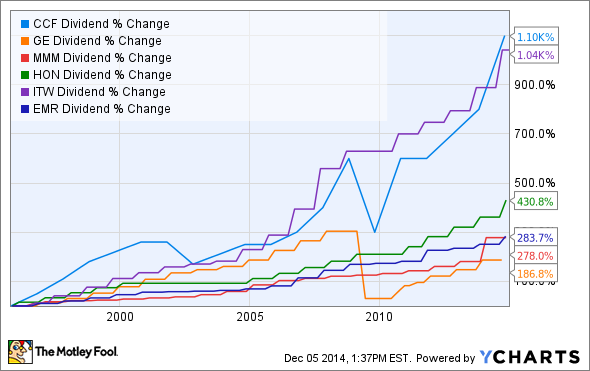 Things to know before investing
As great as I think Chase Corp is as a long-term investor, there are a few facts and potential risks investors need to know.

The first is that Chase pays an annual dividend, current yield 1.8%, at the end of October. This has both positive and negative aspects. On the negative side, it limits your ability to pay expenses or compound returns through dividend reinvestment compared to quarterly dividend payments. On the plus side, management is able to grow the dividend faster because it only makes its dividend declaration decision with greater information about how much cash flow the company needs to retain for the next year's growth.

In terms of short- and medium-term risks to the company, the recent plunge in oil prices may slow short-term growth of Chase's construction segment offerings, specifically those that serve the oil and gas industry.

In addition I'm a bit concerned about Chase's ratio of capital expenditures (investment in future growth) relative to its depreciation (how fast its current assets wear out). As this table shows Chase lags its peers by a large amount and in the last two years depreciation has doubled while increases investments new equipment has remained flat.

This is not to say that I'm necessarily predicting Chase's growth will necessarily slow. After all, its Capex/D&A ratio is similar to Illinois Tool Works which has managed to grow its EBITDA by 10.6% annually over the last five years (compared to 17.7% for Chase Corp). However, I would recommend that investors in the company keep a watchful eye on this ratio because if it remains this low long-term it could threaten the company's future growth prospects.

Finally, prospective investors should be aware that Chase Corp, as a small cap, is more volatile than its larger peers. For example, over the last five years, Chase has been 70% and 57% more volatile than the S&P 500, and the average of its larger peers discussed in this article. Keep this increased volatility in mind when deciding on how large a portion of your portfolio you want Chase Corp to comprise.

Bottom line: One of the best undiscovered dividend growth stocks
Chase Corp may be an unknown company in a thoroughly boring business, but its long-term track record of responsible, strong, and disciplined growth has made it one of the best income investments of the past two decades. With an exceptional management team, sky-high insider ownership, a vault-like balance sheet, two major economic trends acting as strong future growth catalysts, and a dedication to returning cash to shareholders through strong dividend growth, I think there's a very good chance Chase Corp will continue its under-the-radar, market-crushing total returns for many years to come.