Over the past year, BlackBerry (NYSE:BB) CEO John Chen has steered the fallen smartphone maker away from premium phones and toward three areas of potential growth: cheaper phones for emerging markets, the expansion of BlackBerry Enterprise Service in the mobile device management market, and the monetization of BlackBerry Messenger, or BBM.

Of these three initiatives, monetizing BBM seemed like a long shot. Making the service available to iOS and Android last year was a step in the right direction, but the app still had only 91 million monthly active users, or MAUs, as of September 2014 -- a gain of just 11 million MAUs since last October. 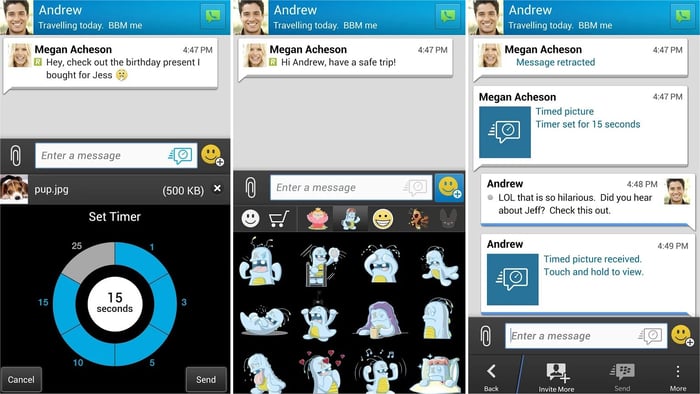 Faced with these massive competitors in mobile messaging, can BBM realistically offset BlackBerry's losses in hardware (handsets) and services (subscriptions), which posted respective year-over-year sales declines of 46% and 41% last quarter? Let's look at three key things that could determine the future of BBM as BlackBerry's "secret weapon."

Partnering with companies that offer free Internet connections is clever, since it could encourage the adoption of BBM in countries where average citizens can't afford mobile data plans. It might encourage the adoption of BBM by younger users as well, since Blyk mainly targets 16 to 29 year olds. The partnerships also complement BlackBerry's plans to sell lower-end devices such as the Z3 in emerging markets.

2. Learning from its rivals
BlackBerry's advertising initiatives integrate several of its rivals' main features. Like Facebook, BlackBerry blends "sponsored" News Feed ads into BBM. Like Naver's LINE and Tencent's WeChat, BBM offers sponsored sticker packs, which give users cute, company-sponsored stickers to use in conversations. Additional stickers can also be purchased in the BBM Shop.

BBM also has sponsored BBM Channels, which encourage users to follow different businesses, brands, and people. Advertisers pay for featured placements within these channels. LinkedIn offers a similar Channels feature, which was introduced at the same time as BBM Channels last May.

BBM's most unique feature is "sponsored invites," which let advertisers send channel invitations to users based on age, location, and interests. These invitations are marked as "sponsored," and if declined, future invitations from that channel will automatically be blocked.

3. A secure messaging platform
BlackBerry states that "at no time is personally identifiable information about any BBM user viewable by channel owners or advertisers," and that it only uses information provided by users when they initially set up their accounts.

This is a stark contrast from Google, which builds targeted ads based on a user's actions within the Google ecosystem, and Facebook, which lets companies create ads based on its gold mine of dynamically changing user data.

Since BlackBerry has built its reputation on enterprise security, it must ensure BBM remains a trustworthy platform while being monetized. But as BBM enters this new phase, maintaining that balance could become increasingly difficult.

The road ahead
BlackBerry's BBM upgrades are encouraging, but the app remains a tiny part of the company's overall operations. Ninety-two percent of BlackBerry's revenue still came from its ailing hardware and services divisions in the first half of fiscal 2015.

Another key question is whether expanding BBM to iOS and Android will convince users of other mobile messaging apps to switch over for their daily communication needs. Moreover, newer enterprise-grade messaging apps such as Slack, Confide, Tiger Text, and Eko could be preferable for businesses with relaxed BYOD policies.

On the bright side, BlackBerry has integrated some of its rivals' best features into BBM and could piggyback the app on free Internet services for developing and emerging nations. For now, investors should wait to see if BBM's MAUs continue to increase, and if it can help BlackBerry Enterprise Service increase the software segment's share of BlackBerry's top line.