McDonald's has become a shadow of its former self as sales continue falling.

Even McDonald's (NYSE:MCD) realizes how desperate its situation has become. After yet another month of falling sales, the fast-food restaurant is hastening the roll-out of what could be its salvation: deployment of its build-your-own-burger stations.

McDonald's is clearly panicked. Domestic same store stores tumbled once again in November, plunging 4.6%, while global comps were down 2.2%. It marks the 13th consecutive month the burger chain has gone without recording a positive uptick in comparable sales. Globally, they've been negative for six consecutive months. 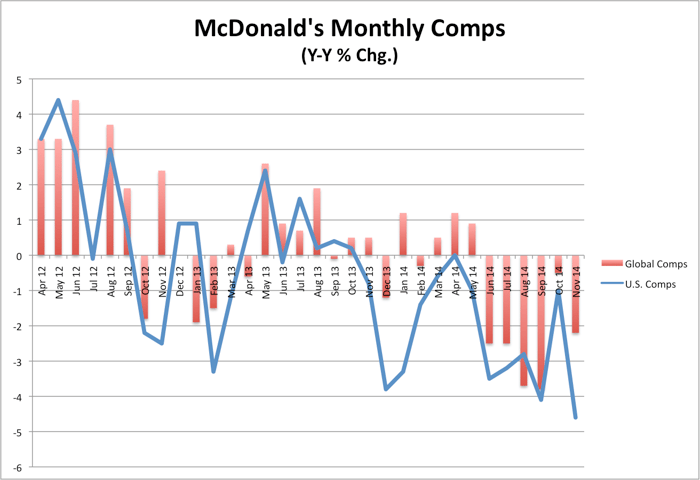 Last month both McDonald's and Wall Street celebrated better-than-expected sales for the month of October, but I warned investors they should hold off on the bunting and parades: the restaurant operator had launched its popular annual Monopoly promotion and even franchisees were left clinging to the hope the game would "stop the bleeding."

It did. For a month. Barely.

Now McDonald's is back to hemorrhaging sales and its condition is dire.

It's become an article of faith that diners are flocking to fast-casual Mexican restaurants, Chinese food outlets, and even pizzerias because of the fresher ingredients and personalization options available.

And now it's McDonald's turn.

It is racing forward to immediately expand the four "Create Your Taste" test sites currently operating in southern California to 30 locations in Illinois, Georgia, Missouri, Pennsylvania, and Wisconsin, and then on to 2,000 sites next year.

McDonald's kiosk-based platform allows customers to personalize virtually every aspect of their burger, from bun and the number of patties to the types of cheese and sauces to put on top. And it's no longer just a build-your-own-burger, or BYOB option: the fast-food restaurant extends it to chicken sandwiches too.

It might take some time to retrain McDonald's customers on how to order.

In this McDonald's of the near future, customers bypass the regular counter and head to touch-screen tablet kiosks where a store employee is available to help negotiate the new ordering process. Among the options available are three types of cheese, a variety of buns (or no bun at all!), several sauces, and a number of toppings, including guacamole, jalapenos, and chili-lime tortilla strips.

And then they wait. A long time by fast-food standards.

According to estimates, it can take as long as seven minutes for a BYO sandwich to be made. Considering McDonald's was experimenting with speeding up its drive-thru with 60-second food-order guarantees, the emphasis on slowing down the ordering process inside seems a bit incongruous.

But it also highlights another problem McDonald's faces in rolling this out to the masses: Create Your Taste is not available through the drive-thru. You have to come inside to order your customized burger or chicken sandwich. Yet it's estimated that many of its restaurants generate as much as 70% of their business through the drive-up window.

It's clear McDonald's is panicking as it tries to gain control over a situation spiraling out of control. The reimagining of itself as a fast-casual restaurant could be just what McDonald's needs, but plenty of hurdles remain in its path that should refrain investors from hoping a turnaround will quickly materialize.