Pizza Hut keeps its fedora-style roof logo, but updates its look with what it hopes is a more contemporary feel. Image: Pizza Hut.

However, it's solution to changing customer perceptions of its restaurants by completely reinventing itself as yet another fast-casual pizza joint amounts to doing too much, too quickly and will end up having too little impact on results. Unless, of course, you consider exacerbating the situation something for which it should strive.

An all new look
The Yum! Brands (YUM 3.35%) pizza chain unveiled on Monday a new menu that than doubles the available ingredients at all 6,300 U.S. locations; offers 10 new crust flavors like Honey Sriracha, Salted Pretzel, and something called Ginger Boom Boom; six new sauces; 11 new flavor recipes; five new Skinny Slice recipes; drizzles; and more. In all, there will be more than 2 billion customization options.

Pizza Hut may also want to remember one of the hallmarks of Sales Marketing 101: a confused mind always says no.

It's called fast food for a reason
One of the problems fast food restaurants faced as they sought to give customers more menu options was that it slowed down service. McDonald's (MCD 2.50%) has learned that the hard way as its franchisees balked at all the options it was introducing to its menus that were increasing costs and slowing down service.

The burger shop is also experiencing sustained periods of falling sales, but has reversed course, streamlined its menu, and even experimented with a 60-second food guarantee at drive-thru windows in Florida because ordering had slowed to a snail's pace.

Pizza Hut risks causing service in its restaurants to seize up from the abundance of choice it's giving customers.

The Yum! Brands chain is far and away the pizza industry leader in terms of revenues, number of restaurants, and revenue per restaurant. It generated $12 billion in global sales last year at more than 15,000 restaurants in 93 countries worldwide.

But where its Taco Bell and KFC restaurants have experienced growth, Pizza Hut is in a period of decline with comps falling 1% last quarter and 2% over the first nine months of 2014.

Becoming the next "Chipotle of pizza" is seen as the cure for what ails sales.

No matter how you slice it, pizza is hot
Not only is it competing against traditional rivals like Domino's Pizza (NYSE: DPZ), Papa John's Pizza (Nasdaq: PZZA), and the corner slice-and-go joint, but so-called gourmet pizza shops are springing up everywhere.

Fast-casual restaurants comprise just 14% of the total $223 billion limited-service dining segment, but growth is outpacing both the quick-serve and full-service segments and analysts see pizza as being a natural extension of the concept. The market researchers at Technomic suggested made-to-order pizza could be the next big thing because it already uses fresh, gourmet ingredients that capitalize on the best "health and wellness concepts" found in fast casual dining leaders like Chipotle Mexican Grill (CMG 0.79%).

Indeed, even Chipotle wants to cash in on the trend and has invested in the fast-casual Pizzeria Locale shop. Others are also looking to bite off the trend, including Buffalo Wild Wings (BWLD), which invested in PizzaRev, and Papa Murphy's Holdings (FRSH), which held its IPO in May.

The K.I.S.S. principle at work
Instead of dumping two billion combinations on its customers, Pizza Hut might do better by following the playbook of Domino's, which several years ago launched its own turnaround effort. Rather than reinventing itself from the ground up, it played to its strengths and simply chose to make its pizza better. It's been turning out higher sales ever since. 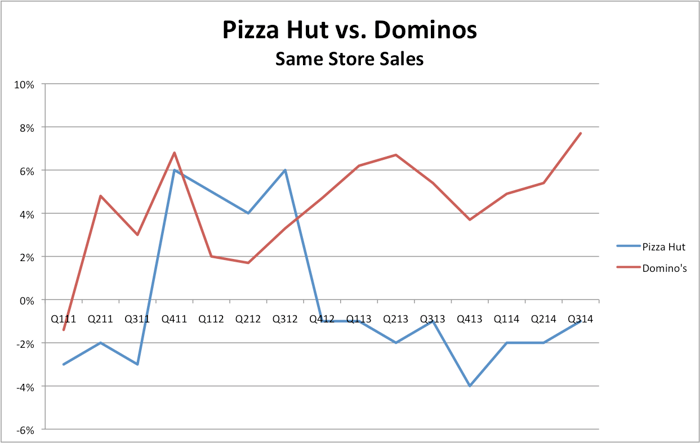 Go your own way: Domino's admitted its failings and moved on. Pizza Hut still needs to do so. Data: Company quarterly SEC filings.

Domino's recent earnings report showed another quarter of higher than expected comps that grew 7.7% from last year and were well ahead of the 5% growth it experienced last year in the same period.

Pizza Hut, which has tried several reimaginings of the business over the years, is stuck in a rut. Giving them a mind-numbing array of selections isn't necessarily an improvement, and could be costly after the gee-whiz factor fades.

Yum! Brands certainly needs to reinvigorate the Pizza Hut brand, but giving its customers too many choices may be just as bad as giving them no choice at all.

Follow Rich Duprey's coverage of all the restaurant industry's most important news and developments. He has no position in any stocks mentioned. The Motley Fool recommends Buffalo Wild Wings, Chipotle Mexican Grill, and McDonald's. The Motley Fool owns shares of Buffalo Wild Wings and Chipotle Mexican Grill. Try any of our Foolish newsletter services free for 30 days. We Fools may not all hold the same opinions, but we all believe that considering a diverse range of insights makes us better investors. The Motley Fool has a disclosure policy.

Why Bed Bath & Beyond Stock Was Sliding This Week

Why Roblox Stock Was Down Today