China's GDP has grown 670% from $1.2 trillion at the beginning of the century to $9.24 trillion in 2013. That's mind-numbingly fast growth. Perhaps the only thing more amazing is how the country has accomplished the feat: with the help from coal, a lot of coal. Some estimates demonstrate that China has had to build at least one new coal power per week to fuel growth, which is backed up by the fact that nearly 80% of all electricity generated there comes from coal (compared to just 39% in the United States).

However, after recently agreeing to peak carbon dioxide emissions by 2030 or sooner, economists quickly realized that China would need to reach peak coal usage well before then. No surprise, then, that Beijing announced last month that coal use would peak by 2020. In fact, some provinces will be required to cut production by 99% by the end of the decade to reach a combination of new pollution and renewable energy standards. Although necessary to reach carbon dioxide emissions targets, turning away from coal creates uncertainties for power generation in China after 2020.

After accounting for coal and hydropower projects, all other energy sources account for just 12% of installed electricity capacity combined. In other words, the growth needed in renewables, natural gas, and nuclear could create big opportunities for investors to exploit. Here we'll consider if China's virtually untapped shale gas reserves can find the overnight growth needed to fill the void left from peaking coal, and whether Chinese companies such as PetroChina Company (NYSE:PTR) or established multinationals such as Chevron (NYSE:CVX) and Royal Dutch Shell represent the wiser potential investment?

Shale gas revolution, part 2?
Energy investors are well-aware of the American energy boom that was ignited by accessing shale oil and gas, but China, not the United States, actually has the largest recoverable shale gas reserves in the world. Progress has been slow, as nearly all of the nation's production currently comes from conventional sources, but Beijing has big ambitions for its shale reserves -- which will be needed to match its growing consumption. 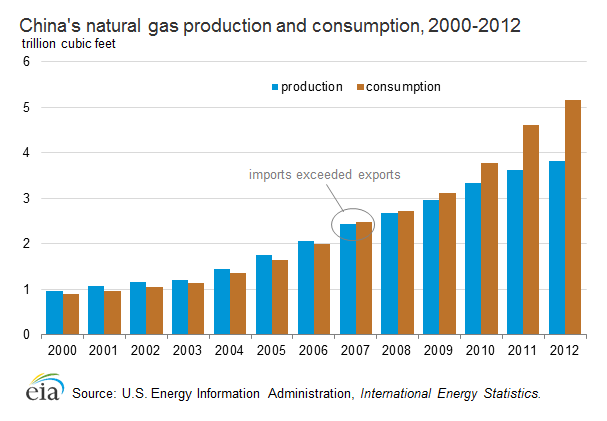 Early production in shale basins has proven difficult -- and frustrated the likes of Royal Dutch Shell and Chevron -- for several reasons. First, tricky geology. China's reserves are deeper than those found in the United States and require new fracturing fluid formulations to break through its unique rock compositions. Additionally, large sections of the shale fields are in mountainous terrain prone to seismic activity. The latter has fragmented the recoverable reserves, which will reduce the effectiveness of current horizontal drilling techniques.

Second, supporting infrastructure such as vast pipeline networks is still being developed in China. Even if companies could produce large volumes of gas, they would be hard-pressed to move it around efficiently.

Third, China has only begun investing in recovering shale gas in the last few years. Early projects and exploration have taught the domestic industry (1) much more investment is required, and (2) they'll likely need America's help.

Is home-grown technology enough?
The Chinese government has been keen to cultivate joint ventures between its largest energy firms. For instance, one was recently announced between PetroChina Company, chemical manufacturer Sinochem, and a state-owned development company. The partners have invested $4 billion to develop wells across 6,000 square miles in Chongqing, the nation's most productive shale field so far, which will begin production in 2017. The field is believed to hold nearly 8% of the nation's total reserves. 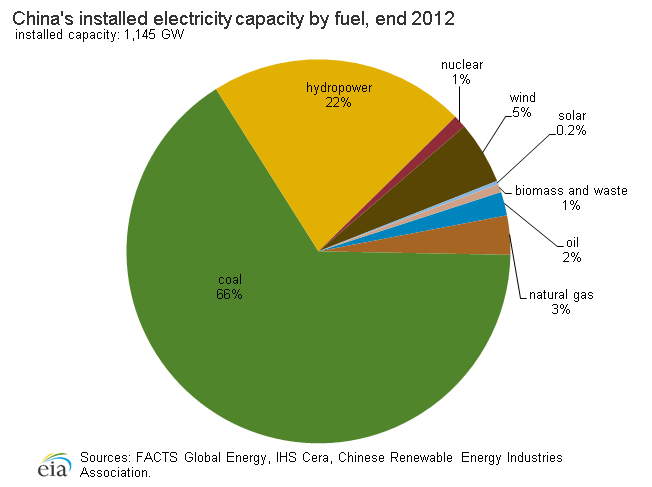 Only 3% of China's installed capacity is derived from natural gas, compared to 66% from coal. Source: EIA.

In other words, there's a long, long way to go before China reaches its potential in natural gas -- and it certainly won't occur by 2020. If it really wants to expedite its arrival as a global leader in shale technology it may need to seek help from multinational drillers that have experience in Bakken, Marcellus, and Eagle Ford fields.

Outside investments needed, but...
It's not surprising that China is attempting to develop its own technologies and companies to tap into domestic shale gas reserves. And it hasn't kept more established players out, either, although outside investments have resulted in disappointing results to date. For instance, Chevron owns 49% of a $6.4 billion project that will sport an annual capacity of 424 billion cubic feet (12 billion cubic meters). The project was delayed by five years thanks to the challenging geography and isn't expected to come online until 2015 at the earliest.

Royal Dutch Shell saw similarly challenging geography slash its expectations for a project with China National Petroleum Company, the first sharing contract signed in China, from major investment to afterthought. The company blamed geography and the dense population for its dampened goals, which essentially demonstrated that the company has better investment opportunities available.

What does it mean for investors?
While outside investments have had difficulty early on, the demand for cheap and relatively clean energy is too large and the volumes of shale gas too enticing for China to not develop the necessary technologies. In the current environment, however, there's simply no shortage of competitive global energy investments to be made, which allows Chevron and Royal Dutch Shell to pass on challenging Chinese production for now. Expect them to come knocking again when better technologies are developed, but don't expect Chinese shale gas to represent an major investing opportunity anytime soon.