AT&T (NYSE:T) is one of the largest broadband service providers in America. With 16.5 million subscribers at the end of the third quarter, Ma Bell ranks second only to Comcast and its 21.6 million Internet subscribers. Broadband subscribers are a core growth driver for AT&T, making up for the company's torrential loss of legacy voice customers.

But there's a sea change coming. Can you feel it? AT&T's management certainly can.

A new wave of serious competition is taking shape in the broadband Internet market, and AT&T's leadership is pulling out all the stops to halt this threat.

You might think that AT&T would shrug its shoulders over new competition in such a laughably small market. But the company sees this as the beginnings of a much larger threat: Allow one high-sped service at incredibly low prices, and other cities will surely follow. Soon enough, this tiny insurgent will have turned into a nationwide trend, putting enormous pressure on AT&T's existing business model.

So AT&T placed roadblocks in front of Chanute's unwelcome broadband project. Under an aging Kansas law, the city must raise funds for the network buildout via bond sales, and these bonds have to be approved by the Kansas Corporation Commission.

AT&T subsidiary Southwestern Bell petitioned the Commission to "intervene" in Chanute's approval process. The routine request was quickly granted but didn't amount to much. KCC staff immediately issued a recommendation to approve Chanute's bond sales, and Chanute appears to be merrily on its way to getting low-cost, high-speed broadband services.

So AT&T's efforts were for naught this time, and Chanute officials hope to start building the new network in 2015. But AT&T gets points for showing up to the fight.

Chanute is hardly the first city in America to explore municipal broadband operations. The similarly sized city of Bristol, VA runs a citywide fiber-optic service under the OptiNet brand. The network has been around since 2003, with significant expansions in 2009 and 2010. However, the gigabit Internet plan at OptiNet costs a hefty $320 a month, so Chanute's vision is much more consumer-friendly.

Then there's Chattanooga, TN where the fiber-based data network is married to one of the first smart electric grids, which uses networked data collection and analysis to optimize electric service delivery -- this is Internet of Things stuff, folks. And the consumer-grade gigabit service costs less than $70 per month, making it closer to Google(NASDAQ:GOOG) (NASDAQ:GOOGL)Fiber than to Bristol's OptiNet.

And of course, AT&T and other ISP giants lined up to fight Chattanooga's gigabit plans, but regulators shrugged off wispy-thin arguments that government grants should support free enterprise rather than build assets under Uncle Sam's ownership.

AT&T wants to protect its high-margin broadband sales and has chosen to do it by opposing the rise of new competition. But Google Fiber is spreading around the country, and municipal networks like the ones in Chattanooga and Chanute may just be the beginning of a larger trend. Google Fiber has also inspired a number of copycat efforts from smaller businesses. 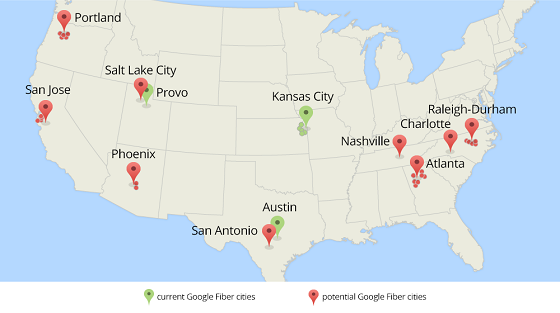 And wherever these newcomers show up, incumbents like AT&T are forced to do better. Prices go down and connection speeds go up, just enough to keep the existing services competitive.