Apple has a had a historic year in terms of acquisitions. Not only has the Mac maker completed its biggest purchase in history, it also bought more companies in fiscal 2014 than ever before.

As 2014 winds down, it's a good time to review Apple's (AAPL 2.14%) year. While the Mac maker performed incredibly well, with shares up 36% year-to-date, let's look specifically at the company's acquisitions. Apple had a historic year in this department, in more ways than one.

2014 had the biggest ...
The obvious headliner here is Beats. At $2.6 billion, Beats is Apple's largest acquisition in history – by far (that we know of). Prior to Beats, Apple's purchases typically topped out at or around $500 million. The company acquired flash specialist Anobit a few years back for upwards of $500 million, which was more than the $404 million it paid to bring Steve Jobs back to Apple via the NeXT acquisition.

In Beats, Apple gets a premium headphone business that dominates its market segment, a small but growing streaming music service, and most importantly, talent. That includes the Beats execs that have deep ties within the music industry, but also the human curation team that differentiates Beats Music.

... and the most
This year isn't quite over yet, so investors don't know how many companies Apple may acquire in the fourth quarter. Apple did confirm that it picked up Seattle-based cloud networking start-up Union Bay Networks in November, but that's about all investors have caught wind of.

But if we go by fiscal years, we can see how Apple's acquisition strategy has evolved in recent years under Tim Cook. Cook became CEO at the tail end of fiscal 2011, and Apple has been scooping up companies hand over fist ever since. 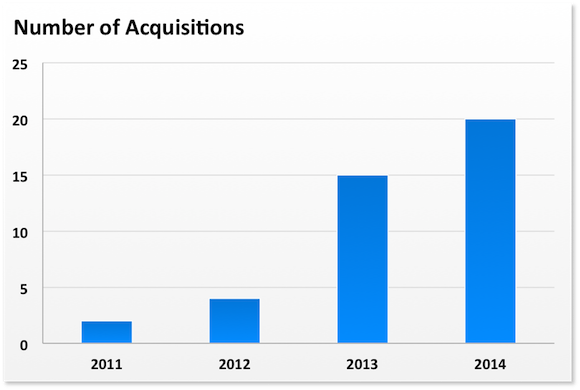 Beyond Beats, here are Apple's other smaller acquisitions that have made headlines this year.

This is far from a comprehensive list. Cook confirmed that Apple bought seven companies during the September quarter alone, and news only broke about one of them. Naturally, as the sheer number of acquisitions rises, so too do Apple's cash outlays. 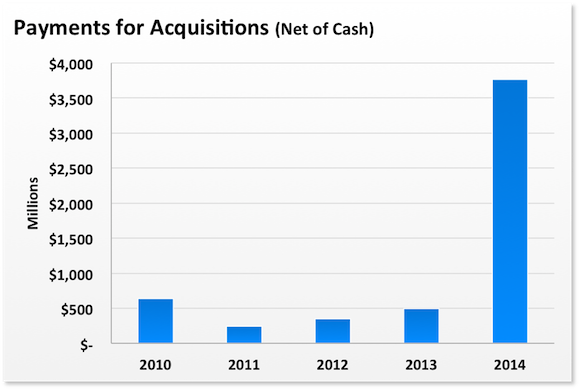 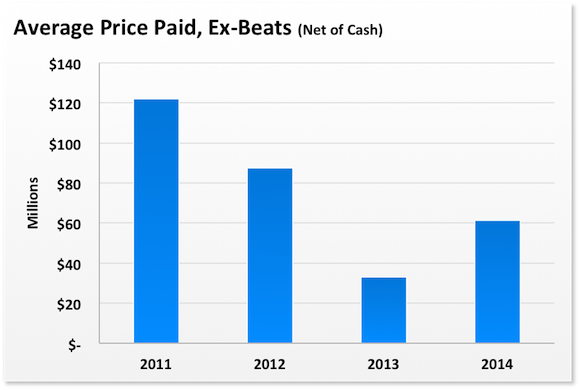 At a time when tech heavyweights seem to be paying massive premiums for acquisitions, Apple is still playing fairly conservative in terms of price.

All about that race
Apple is now the proud owner of a wide range of innovative technologies that were in their early stages, technologies that it can integrate into future products. But this isn't just a technological race; it's also a dash to snap up the best talent before the competition does so. Apple is in the midst of an acqui-hiring spree.

Consider the January acquisition of SnappyLabs, a single developer that had developed a breakthrough JPEG-compression engine that was tailored for ARM processors like Apple's A-chips. Thanks to the faster compression, SnappyLabs' app allowed the iPhone 5 to capture photos at 20 frames per second, much faster than the Galaxy S4's 7.5 frames per second (both were 2012 flagships). Apple puts a lot of emphasis on the iPhone's photographical prowess, adding new photo and video modes each year, so this purchase makes perfect sense.

But most importantly, we're not even close to the finish line of this race.

The next big thing is almost here
So with all of this in mind, what can investors expect of Apple's acquisition strategy in the years ahead under Tim Cook? The CEO has said that Apple will not let price preclude it from acquiring a company that is a good strategic fit in the long-term. That said it's unlikely that Cook intends to start buying up large companies with regularity.

Investors have seen a breathtaking increase in the rate at which Apple acquires smaller companies. This is as much offense as it is defense. Rivals have no problem buying companies that have long-term potential, and if Apple doesn't start playing ball then it could potentially lose out on the next big thing.

In the years to come, investors should expect Apple to continue its brisk pace of smaller acquisitions, interspersed with the occasional jaw-dropper.