One of my Twitter followers asked me a great question about LINN Energy (OTC:LINEQ) the other day: "At what price does oil have to drop to where LINN will have problems making the interest payments on their debt?" I thought it was such a fundamentally important question that it deserved a deeper explanation than the 140 characters allowed on Twitter, as there is no short answer. I also figured that more than one LINN Energy investor was interested in that answer, as the cratering unit price has as much to do with oil prices as it does the company's massive debt load.

Investors who have followed Linn Energy for any length of time know the company hedges a significant amount of its oil and gas production to protect itself against any sudden price drops. As we've seen this year, these drops can come out of nowhere and can be very deep. Just look at how oil has plunged in the past few months after years of relative stability. 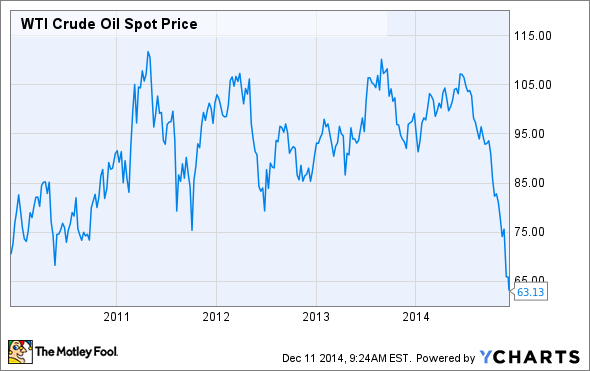 I say relative stability, but the price had been quite volatile in the range of $85 to $105. To smooth out this volatility LINN Energy hedges its oil production with a variety of derivatives, as shown in the following slide. 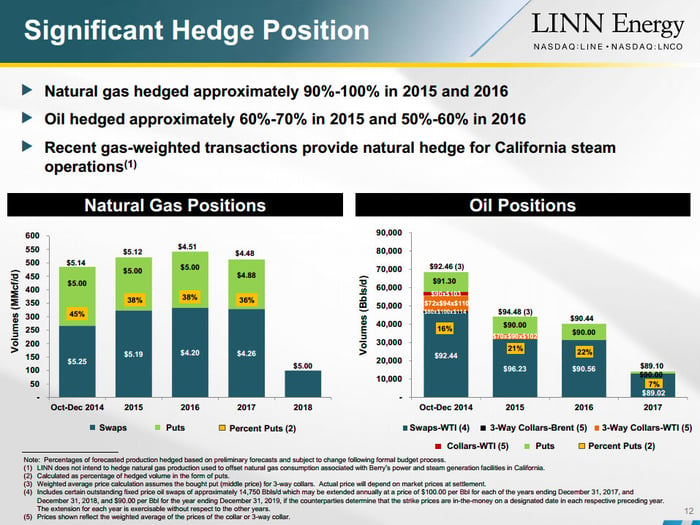 That slide also shows that 60%-70% of Linn's oil volumes are hedged heading into 2015, with 50%-60% hedged the following year. These hedges protect a large portion of the company's cash flow for the next two years, which is bolstered by the 90%-100% of LINN Energy natural gas production that is hedged. The company estimates that roughly 90% of its cash flow is secure for the next two years, no matter what happens with the price of oil.

With that out of the way, let's see how this situation impacts the company's ability to meet its debt obligations. Through the first three quarters of this year, LINN Energy generated $2.8 billion in revenue, from which it made $422 million in interest payments. After paying that money and the rest of its bills, the company still had $1.4 billion in cash flow from operating activities. LINN sent half of that cash flow back to investors via distributions, with the rest reinvested into new oil and gas wells to maintain production. Clearly, the company's assets generate substantial revenue to meet its interest payments, with plenty of cash flow left over for unitholders. So shaving 10% off the top next year won't have any impact on the company's ability to meet its interest payments.

The duration is more important than the drop
It really does not matter, in theory, how far the price of oil drops over the next two years, as LINN Energy would still pull in enough cash flow to make its interest payments, with plenty of cash flow left over. However, things get iffy after a couple years of low oil prices. As we saw in the slide above, LINN Energy's oil hedges for 2017 are weak, meaning depressed oil prices could become a problem at that point.

However, there are too many variables to put a number on where the price of oil would need to be in two years before it becomes problematic. LINN Energy still has the liquidity today to buy $1 billion in assets to boost future cash flow. The company could also go the other way and start to sell assets to whittle down debt. Finally, it could always opt to press pause on the distribution and use certainty of the cash flow over the next two years to reduce its debt. Ultimately, its long-term oil and gas hedges give the company ample time before its ability to meet its interest obligations would be compromised.

The last thing to keep in mind here is LINN Energy's debt maturity schedule. Here, too, the company has several years until this becomes an issue. It doesn't have any notes due until 2019, which is also the year in which its credit facilities and term loans mature. That time cushion means LINN Energy won't be forced to take action because of a liquidity crisis.

Investor takeaway
For the next two years, LINN Energy investors don't need to give much thought about any liquidity issues. The company is well hedged, so it can survive a severe drop in oil prices. This gives the company ample time to react to the drop (and remain in creditors' good standing) if it endures for more than a year.