Knowing if a particular equity's run has come to an end is often as difficult as identifying a key purchase in the first place. At the end of 2013, we evaluated Alaska Air Group's (NYSE:ALK)prospects to determine if the stock's ascent could continue into 2014. Alaska Air did just that, although in an airline sector that has attracted enormous investor interest, the company has actually underperformed its peers year-to-date: 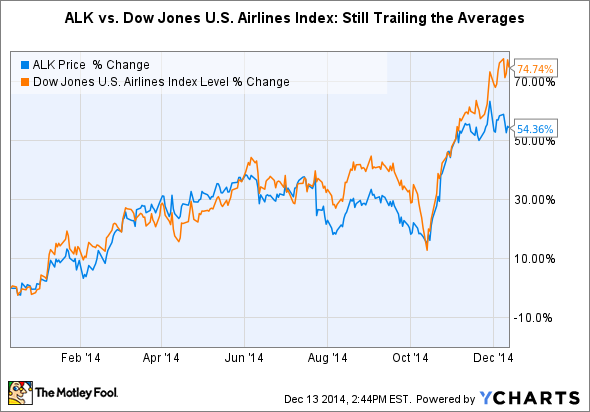 While a 50%-plus return shouldn't be scoffed at, investors seem to perennially discount the airline versus its peers. Will 2015 be the year the market recognizes the Seattle-based carrier's merits? Let's review its prospects for next year, along with one risk factor that continues to depress its relative valuation to the U.S. airline industry.

Variable incentive pay is open to almost all Alaska Air's employees, and has in recent years equaled nearly one month of the typical employee's salary. Year to date, Alaska Air has expended $84 million on variable pay, or just over 10% of the $832 million spent on wages during the period.

Recently, Alaska Air's management shared the following formula during an investor presentation: For every 1% improvement in productivity, the airline saves $11 million in the form of reduced costs. Alaska Air's employees are aligned with management's goals, and understand that every 1% improvement in productivity translates directly into a heftier paycheck.

Productivity is one reason that Alaska Air has been able to reduce its cost structure over time: According to the company, its CASM (cost per available seat mile) of 11.57 cents is 23% lower than that of competing legacy airlines, which have an average CASM of 14.22 cents. In fact, Alaska Air's cost structure more closely resembles the LCC (low-cost carrier) model: Again according to the company, its CASM of 11.57 cents is only 7% higher than the average LCC CASM of 10.74 cents.

Reaping the benefits of plane evolution
Alaska Air Group is employing another tool in its long-term bid to control costs: a gradual fleet replacement of its current Boeing 737-400 planes with the 737-900ER model (the "ER" stands for "Extended Range"). The company has taken delivery of 10 of these planes in 2014, and will receive 36 more by the end of 2017.

The 900ER boasts an advanced engine manufactured by CFM International, the joint venture between General Electric and French aviation giant Snecma. The aircraft promises 7% lower trip cost versus previous-generation 737s. Alaska Air Group recently cited the 900ER as a factor behind the company's 2.8% improvement on ASM (available seat mile) per gallon fuel burn in the third quarter of 2014. Alaska Air management also praised the jet's reliability, as well as its substantially lower maintenance cost and greater capacity (37 additional seats) versus the 400 line.

Lower oil prices are what you make of them
For most airlines, fuel cost is one of the largest items on the P&L, comprising in most cases roughly one-third of an airline's cost structure. The protracted slide in oil prices will most benefit those airlines that haven't locked in formerly favorable prices during oil's initial descent. Alaska Air is in this category as it has a simplified hedging strategy: the airline's hedging is confined to purchasing call options that balance upside risk, allowing it to take advantage of oil price decreases in real time. Even better, this approach is relatively cheap to implement: Through the first three quarters of 2014, the company has spent only $2.5 million on new fuel hedges, within a total fuel expense of $1.1 billion.

Based on the numbers below, we reached the conclusion that Alaska Air exhibited many desirable characteristics versus its peers, while remaining well below them on a trailing price-to-earnings basis:

This year, we'll add major carrier competitor Delta Airlines (NYSE:DAL) to the mix and consider an additional metric: PEG, or price to earnings growth. Again, Alaska Air scores fairly well in a mixed peer group of budget and traditional carriers. The company has the third-highest revenue, second-highest profit margin, and is tied for first, with Southwest, for the second lowest debt-to-equity ratio (Spirit Airlines tops this comparison by carrying no long-term debt on its books).

Alaska also holds the third-highest return on invested capital, although it should be noted that Delta's 2005 bankruptcy had the effect of boosting its ROIC numbers well above where they would be today had the company stayed solvent.

Finally, Alaska Air provides the highest dividend yield -- note that low-cost carriers Spirit, Republic, and JetBlue don't issue dividends. As for valuation, the company is now in the middle of the pack when comparing price to trailing-12-month earnings. It fares less well in the category of PEG, which is a measure of price relative to forward earnings.

The Delta drag may become more pronounced...
One mighty constraint on Alaska Air's perceived earnings growth, and hence its relatively tame forward valuation, is Delta's buildup in Seattle. As we discussed last year, formerly friendly partner Delta is looking to beef up its Seattle operations to promote its Asia routes, but it's also competing with Alaska Air on domestic travel flowing through the city. This competitive encroachment on Alaska Air's home base clouds any valuation of its stock.

Clearly, codeshare revenue shrinkage is manageable. What's harder for Alaska to control is Delta's expansion of operations, which in 2014 was largely held in check, but will gain momentum in Q1 2015 and forward. Alaska Air has prepared for this impact by increasing its transcontinental and midcontinental flights, entering 48 markets over the last three years.

Alaska Air has also boosted its ancillary revenues, which are up more than 18% year to date. Company management has suggested in earnings conference calls in 2014 that these nonticketed revenues are another means to dull the impact of Delta's aggression.

...yet Alaska still has room to climb in 2015
For its relatively small size when compared to Delta, Alaska is in sound condition to defend its home turf. The company's debt was bumped up to "investment grade" this year from ratings agency Fitch, one of only a handful of airlines in the industry to garner this prized rating. Alaska Air's well-regarded balance sheet and industry-beating profit margins will help it weather capacity competition from Delta.

More important, Alaska Air Group is ever more focused on the value drivers that have created its success: productivity, new route expansion, a decreased cost structure, and the creation of ancillary revenue. At the same time, the airline intends to continue the intense customer service that ranks it highest among major airlines in on-time performance and customer satisfaction. 2015 may not turn out to be the easiest year for Alaska Air Group, but the carrier is destined to add to its competitive advantages, and has every potential to reward current shareholders.