Oil prices continue an unabated sell-off. No one knows where oil prices will bottom, or for how long prices will stay low. This has investors focused on the sheer drop in crude prices, which as we see below are down more than 40% from the highs earlier this summer. 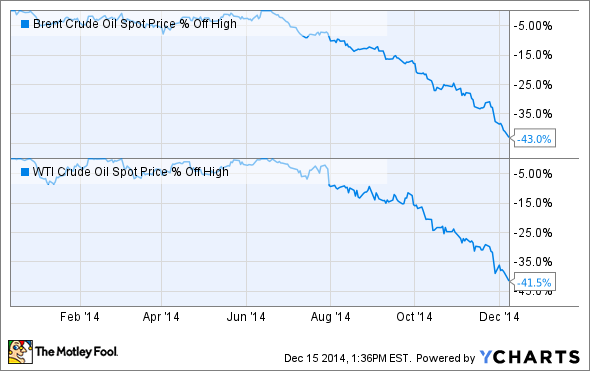 Depending on what hedging technique is used an oil company can lock in a fair amount of its cash flow for the year irrespective of what oil prices do. For example, Halcon Resources (NYSE:HK) has 80% of its production protected next year as we see on the following slide. 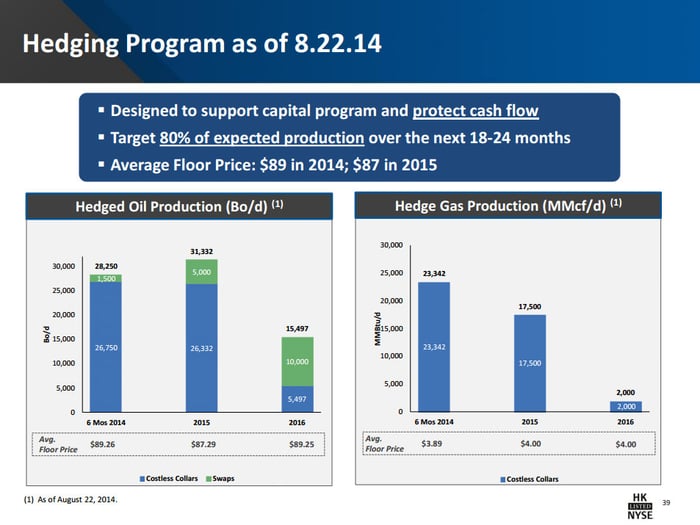 As that slide points out the worst it can do is receive $87.29 per barrel on 80% of its production next year. While 20% of its production is exposed all the way down to zero, the company is still in a much better position to withstand that drop thanks to the rest of its hedges. However, it's when oil prices are still at low levels heading into 2016 that things become a problem because at this point less than 40% of Halcon's 2016 production is protected. That's a big risk as the company's debt laden balance sheet might not be able to withstand such a prolonged slump in oil prices.

We find a similar story at most other oil companies. Production is largely hedged through 2015 and then it drops off heading into 2016 and beyond. Devon Energy (NYSE:DVN), for example, has 60% of its oil production hedged in the fourth quarter of this year as we see on the following slide. 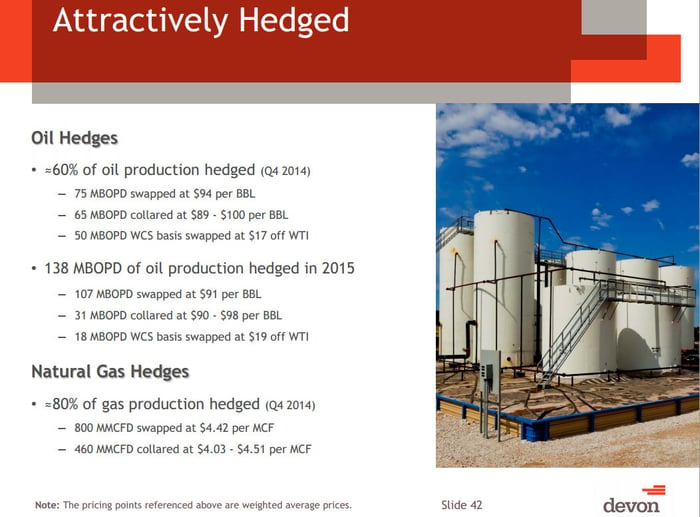 What this means for investors
For the most part, other than upstream MLPs, most oil companies don't hedge much more than a year in advance. This exposes oil companies to a prolonged slump in oil prices, while offering some fairly solid protection in the near term. This is why the sheer drop in oil prices really doesn't matter as long as the duration of the drop is short. However, there is a greater lesson to be learned here and that's the fact that some companies are much better prepared to handle a long duration of low oil prices. Oil companies that had conservatively invested within their cash flow and kept their debt levels low haven't been affected as deeply. We see this by looking at the stock price charts of Halcon Resources and Devon Energy. 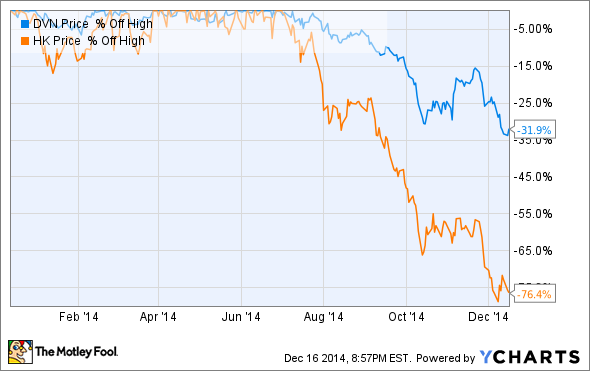 One of the reasons why Devon Energy's stock isn't down as much as Halcon's is because it's built to endure. The company has an investment grade credit rating, billions of cash on the balance sheet, and it invests within its cash flow. The story is quite the opposite at Halcon Resources, which has been growing as fast as it could largely using debt to fund itself. That debt is a looming concern as a long duration of low oil prices could cause the company, and others like it, to default once its hedges run out at the end of next year. Meanwhile, even with weaker hedges Devon Energy is better able to withstand a prolonged weakness in oil prices because it has the balance sheet strength to endure.

Investor takeaway
Right now, investors are acutely focused on the depth of the drop in oil prices. While that deep drop will sting, it's the duration of the drop that matters more than anything else as some companies aren't equipped to handle a long downturn in oil prices. So, what this downturn is teaching investors is that there is more security in being invested in companies that can withstand long duration of low oil prices.