In a tricky environment, the market applauds the Fed's non-committal language

With the Fed's last monetary policy meeting for 2014 now concluded, Fed chairwoman and her colleagues must be relieved that investors appear to have received the Fed's policy statement with good cheer. The blue-chip Dow Jones Industrial Average (^DJI 0.00%) and the broader S&P 500 (^GSPC 0.23%) rose 1.7% and 2%, respectively, with the technology-heavy Nasdaq Composite Index (^IXIC 0.00%) beating both of them, with a 2.1% gain. Meanwhile, the contrarian's asset, gold, fell 0.6% (based on the SPDR Gold Shares (GLD -0.26%)). In each case, a large part of the move occurred after the 2 p.m. EST release of the Fed's monetary policy statement. With the U.S. economy looking increasingly out of step with much of the rest of the world, the Fed had to produce some fancy footwork: 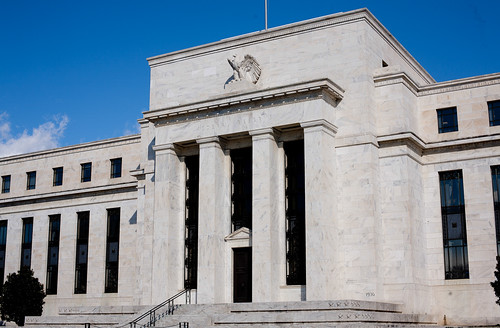 The Fed's careful balancing act: Economic strength vs. oil weakness
In crafting today's statement, Fed policymakers were walking a tightrope in addressing the expected timing of the first rate hike. As a reminder, this was the language they employed in their previous statement, dated Oct. 29 [emphasis mine]:

The Committee anticipates, based on its current assessment, that it likely will be appropriate to maintain the 0 to 1/4 percent target range for the federal funds rate for a considerable time following the end of its asset purchase program this month.

"A considerable time" is thought to signify roughly six months. Since the Fed's last policy meeting, however, two opposing trends have emerged:

On the one hand, the most recent data regarding the U.S. economy suggest progress is accelerating – which is consistent with a potential mid-2015 (or slightly earlier!) rate rise.

On the other hand, the continued drop in the price of oil – which is now off more than 40% from its June high – has pushed inflation and inflation expectations further away from the Fed's 2% target. Furthermore, the speed of oil's fall has ushered in the specter of financial instability, with certain emerging markets experiencing volatility in their currencies, most prominent among which is Russia. Inflation that is further below target and the threat of financial market turmoil suggest zero interest rates still have their place – perhaps beyond mid-2015.

Two steps forward, one step back
In the end, the Fed pressed on with new language, stating that [my emphasis]:

Based on its current assessment, the Committee judges that it can be patient in beginning to normalize the stance of monetary policy.

Don't be fooled by the use of "patient" -- this is a signal that rate rises are now firmly on the Fed's agenda... and yet policymakers could not bring themselves to clearly signal that "leap". Indeed, the new statement follows by quoting the old formulation:

The Committee sees this guidance as consistent with its previous statement that it likely will be appropriate to maintain the 0 to 1/4 percent target range for the federal funds rate for a considerable time following the end of its asset purchase program in October...

In other words, the Fed is remaining deliberately vague in terms of expected outcomes, while repeatedly emphasizing the factors it is taking into consideration in its decision-making process. Sorry, folks, but there are a lot of moving parts to the economy, and formulating monetary policy is a complicated business!

Note, however, that while the statement emphasizes that the new language is "consistent with" the old with regard to the timing of the first rate hike, the FOMC's projections show a more dovish path for following increases -- which puts them closer in line with the market. Indeed, the committee now forecasts the Fed funds rate to be between 1% and 1.25% at the end of next year, down from its mid-September projection of 1.25 to 1.50 percent.

Investors need to look beyond the Fed's word games
While financial journalists, academics and traders enjoy dissecting the Fed's statement, I ought to point out that that game has limited relevancy for the long-term investor. If you consider yourself a member of that tribe, I'd suggest remaining focused on the key determinants of long-term returns: Competitive advantage, earnings power and current valuations. By those standards, the market's enthusiastic response to the Fed's action should inspire caution: At 26.4 times average real earnings over the past ten years, the S&P 500 doesn't look cheap at today's close. But there may be some potential opportunities.

Alex Dumortier, CFA has no position in any stocks mentioned. The Motley Fool has no position in any of the stocks mentioned. Try any of our Foolish newsletter services free for 30 days. We Fools may not all hold the same opinions, but we all believe that considering a diverse range of insights makes us better investors. The Motley Fool has a disclosure policy.