When announced, the Kodiak Oil and Gas acquisition seemed like a good idea. Whiting Petroleum Corp (WLL) offered a rather meager premium to buy out one of the fastest growing producers in the Bakken shale. It was paying a mere $3.8 billion, along with assuming $2.2 billion in debt, to form the top oil producer in North Dakota's Bakken shale formation. Moreover, it was creating a $17.8 billion behemoth that would be one of the largest independent oil and gas companies in the country. However, by the time the deal closed less than six months later it's looking like a deal the company could end up regretting.

Downward spiral
It has been an awful second half of the year for Whiting's investors. The company's stock is now nearly 73% off of its 52-week high as a 41% plunge in oil prices has wiped out billions of dollars in shareholder value. 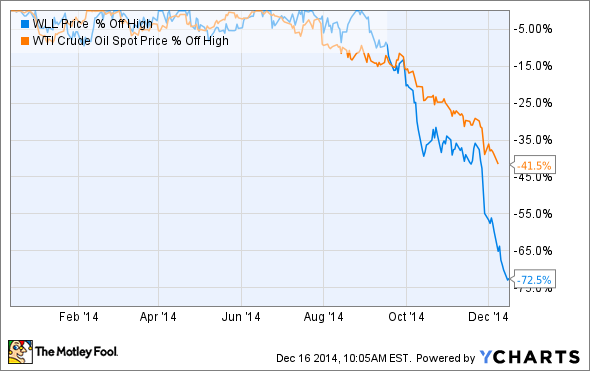 What's truly breathtaking is that when the Kodiak deal closed in early December the entire market capitalization of the combined company was just $6.2 billion. Suffice it to say, Whiting looks to have bought Kodiak Oil and Gas at the very top of the oil market and its investors are now paying for what appears to be a mistake. That said, the deal will only be a mistake if oil prices stay where they are, or lower, for a very long period of time. Meanwhile, the deal still has a lot of merit as the larger scale of the combined companies could prove crucial in the days ahead.

The scale advantage
One of the reasons Whiting Petroleum wanted to buy Kodiak in the first place was to increase its scale in the Bakken oil play. As the map on the slide notes, Kodiak's acreage was largely complementary to Whiting's. 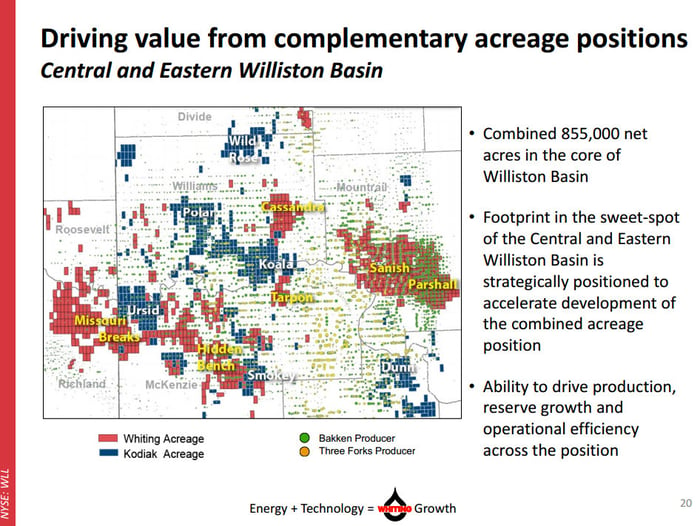 Further, Whiting has been very successful using new well technology to achieve higher production rates, and therefore better returns. For example, one of its more recent wells using newer technology achieved 64% greater 200-day cumulative production than an offset well using older well technology. Meanwhile, Kodiak was running a number of pilot tests on downspacing wells in order to improve its returns. So, by combining these technological advances the two companies should drive even better results in the years ahead. This could prove to be a key to making money in a lower oil price environment instead of struggling to make ends meet.

Investor takeaway
In hindsight Whiting Petroleum investors likely wished the company hadn't bought Kodiak Oil and Gas at what appears to be the top of the oil market. That said, the deal still adds significant scale, which could be the key to driving down costs in today's environment. Further, the combined companies can make even better use of new well technologies to achieve stronger results that yield better returns. So, while the deal could have been sweeter if made today, it still might not turn out to be an awful deal after all as the increased scale could be a big difference maker down the road.