When you invest for the long term, it's critical to construct your portfolio to succeed when the economy booms and when it busts. In my opinion, there is one bank stock that is better positioned for an eventual downturn than all the others.

That bank is M&T Bank (NYSE:MTB), and I have three critical reasons to support my thinking.

But first, a little background on this $97 billion bank
M&T Bank was first incorporated in 1856 as Manufacturers and Traders Bank. The bank has offices in the Mid-Atlantic region from New York through Virginia, as well as in Toronto, Canada.

M&T is a full-service regional bank with both retail and commercial products. That includes mortgages, business loans, cash management, and wealth management services. In other words, M&T Bank is a bank that has products you can understand, not complex derivatives or shadowy hedging units taking on ridiculous risks.

With total assets just under $100 billion as of the third quarter of 2014, M&T is large but not systemically important. The bank is subject to the Federal Reserves stress-testing requirements, but it falls short of other enhanced regulatory requirements for the largest of the large.

Now that we have some general knowledge of the bank, let's dive into the three reasons I'd trust this bank in my portfolio in good times or bad.

Since 1980, the U.S. has gone through five recessions, including the bank-centric savings and loan crisis and the recent financial crisis. M&T weathered all of these storms as well as or better than anyone else, and the stock's performance proves it. 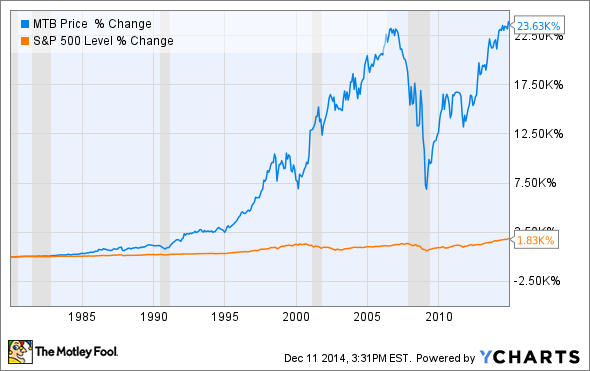 2. M&T is one of the most efficient banks in the U.S.
Fellow Fool John Maxfield makes a strong argument that the most critical metric when evaluating a bank stock is its efficiency ratio. The efficiency ratio is a bank's non-interest expenses divided by its net revenue. The lower the ratio, the better.

In other words, a bank with a lower efficiency ratio is a bank that can more easily turn a strong profit from any level of revenue.

M&T Bank is one of the most efficient operations of all large U.S. banks. The bank reported a ratio of 59.7% in the third quarter. The ratio spiked from 2013 to 2014 -- during the nine-month period ending Sept. 30, it rose about 7% year over year -- but that's the result of a short-term increase in expenses related to a pending acquisition. When that acquisition closes, I expect this ratio to return to previous levels around 55% or lower.

For comparison, Bank of America (NYSE:BAC) reported an efficiency ratio of 92% for the quarter, and JPMorgan Chase (NYSE:JPM) reported 63%. Regions Financial (NYSE:RF), a bank similar in size to M&T, reported 64%.

One not-so-obvious benefit of a low efficiency ratio is that a bank can avoid taking unnecessary risks on the asset side of its balance sheet. The bank can turn an acceptable profit with less revenue (because it's expenses are lower on a percentage basis), so there's no need to chase higher-yielding and riskier loans or investments.

A less efficient bank can't turn a strong profit without those higher yields, and unfortunately, higher yields always come with higher risk. When the economy takes a turn for the worse, it is those higher-yielding, risky assets that will drive losses higher and share prices lower.

3. M&T Bank has a fantastic balance sheet
Jamie Dimon, CEO of JPMorgan Chase, has made a career out of building banks with "fortress balance sheets." It's the cornerstone of his management philosophy, and it is the precise reason JPMorgan managed better than the rest of the industry during the financial crisis.

Tier 1 capital can be pretty hard to understand, though, as it requires banks to adjust for so-called "risk weighted assets." This accounting treatment is far outside the understanding of most retail investors. As such, I also review bank capital and leverage with a far simpler metric: the assets-to-shareholder equity ratio.

M&T had an assets-to-equity ratio of 7.9 for the third quarter. Using a sampling of 65 of the nation's largest banks, I found that the average of those banks' assets-to-equity ratios was 9.2. That means M&T is using less leverage and retaining more capital than the typical regional or national bank in the U.S. 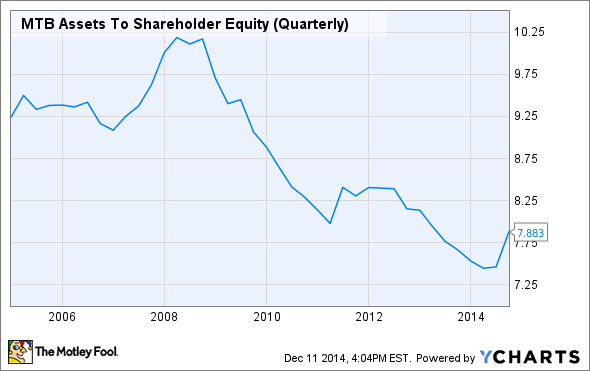 When the economy enters a recession, a bank's capital is a protective layer that cushions the bank from losses. Banks that use excess leverage are the banks that find themselves in hot water when loan losses mount.

M&T is not one of those banks.

Foolish takeaway
No one knows when the U.S. will once again enter a recession. It will happen eventually, though, and that reality is something every long-term investor must accept and plan for.

For bank investors, I think M&T Bank fits the bill as a stock for the good times and the bad. The bank reports strong fundamental results, it has a business model we can understand, it's very efficient, and it has a fantastic balance sheet.

And even better, the bank has a long-term track record of outperforming in boom and bust markets alike.