It's an arms deal that's been a decade in the making -- but it's finally happening: South Korea is buying American drones.

Nearly 10 years ago, South Korea first expressed interest in acquiring Global Hawk unmanned aerial vehicles from Northrop Grumman (NYSE:NOC). This interest developed into a formal request to acquire the massive, seven-ton aerial spy robots in 2009, followed in 2012 by a formal notification to Congress by the Defense Security Cooperation Agency, or DSCA, that a sale was in the works. This week, the Pentagon announced that a deal has finally been signed. 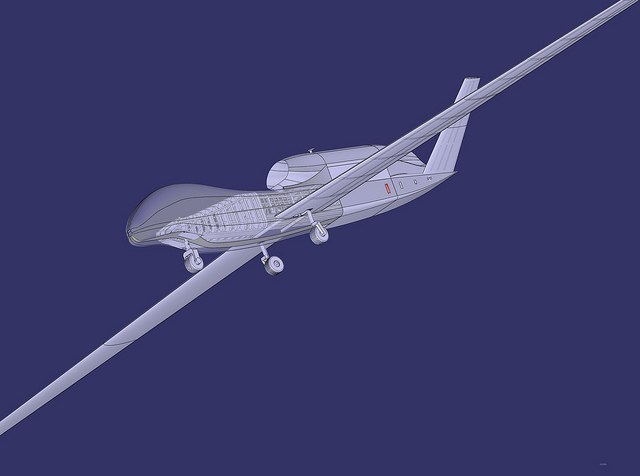 What Global Hawk is...
Capable of flying at altitudes of up to 65,000 feet, over distances as far as 12,300 nautical miles, and for as long as 30 hours without refueling, Global Hawk is one of the most robust large unmanned aerial systems on the market today. While unarmed themselves, these drones have been used to support combat operations in Iraq, Afghanistan, and Libya, as well as on humanitarian missions surveying destruction in the wake of earthquakes in Haiti and Japan.

For its part, South Korea is expected to use its new drones to enhance its "intelligence, surveillance, and reconnaissance capabilities and [to] ensure [it] is able to monitor and deter regional threats in 2015 and beyond," according to the DSCA. ("Regional threats" being a euphemism for China and North Korea.)

What Global Hawk is worth to Northrop...
According to the defense analysts at IHS Jane's Defence Weekly, the Pentagon's contract with South Korea calls for the sale of four RQ-4B Block 30 Global Hawk drones, to be delivered to the peninsular nation over the next five years. (As is common in foreign military sales contracts, the Pentagon will act as intermediary between Northrop Grumman and the South Korean government.) First delivery is scheduled for 2017.

Jane's puts the sales price of Northrop's drones at $657.4 million, the same figure quoted in the Pentagon's contract announcement from earlier this week. But in fact, the value to Northrop Grumman could be much more. Factoring in the cost of the drones themselves, plus "associated equipment, parts, training and logistical support," required to keep them operational and airborne, the eventual value of this contract to Northrop should approximate $1.2 billion, according to the DSCA -- nearly twice what's being reported in the media.

...and what it means to investors
Here at The Motley Fool, we're as interested in reading about supercool weapons systems and breaking defense news as anyone else -- but what we're really interested in learning is how we can translate news like the South Korean drone contract into cold, hard profits in our portfolios. With that end in mind, let's take a quick look at what this week's Global Hawk news means to investors in Northrop Grumman.

The math goes like this: Global Hawk is built by Northrop Grumman's Aerospace Systems unit, the company's biggest business segment by revenues, and its second most profitable. According to S&P Capital IQ, Aerospace Systems earns about 12.1% operating profit margins for Northrop. Thus, the South Korean drones contract is likely to generate operating profits of roughly $145.6 million for Northrop -- about $0.72 per share, pre-tax. Thus, this one single sale should produce enough profit to cover almost a whole quarter's worth of dividend payments for Northrop.

Not bad for a day's work -- even if it took a decade to get here.